NEW YORK — Live television images from the various plenary and working sessions are everywhere at the Clinton Global Initiative. They appear on screens as big as king size bed sheets in the main conference hall. They illuminate flat screens that stand in the halls and smaller meeting rooms. A row of small screens decorate a refreshment area close to the lobby of the Sheraton New York.

This demonstration of televised ubiquity is just the leading edge of a communications strategy that also includes a well-designed and easily navigable Web site, live web casting of every panel discussion that also is archived and retrievable. There are five interior Wi-fi channels for conference participants and a small army of writers and videographers, most of whom represent online publications and networks, few of which — like treehugger.com — that you’ve ever heard of.

It’s noticeable that the mainstream media is barely here. The Chicago Tribune and Los Angeles Times did nice wrapups Friday morning. Forbes and Fortune are covering the conference on their Web sites. The New York Times, though, published just three Associated Press and Reuters pieces. The major papers are still useful as arbiters of importance, but as sources of information about the nuances and transitions and ideas explored here this week they played no role whatsoever. The reason: In the age of the Internet and muti-media, it’s not only essential for organizations to tell their own stories, but they now have the tools and skills to do it better than traditional news organizations, and they can reach huge audiences with their own media.

The beauty of the Web is that all of that content can be archived and readily downloaded for those who didn’t watch in real time. Then producers supplement the video with digital photographs, blogs, and various other print formats — including a running compendium of commitments. The result is that the online visitor can see for themselves on YouTube, MSN, the CGI Website and elsewhere what happened and generate their own narrative. If they need help, they can search the dozens of blogs written here and brought to the fore by Google and Technorati. The combination of self-generated media, mainstream media, new media, all of it instantly available, provides the hundreds of thousands of online visitors who are paying attention this week a kind of instantaneous digital access to this very hopeful global event. Bill Clinton said this afternoon that MSN put the initiative events on its home and that YouTube’s archive of the initiative had generated 500,000 page views. 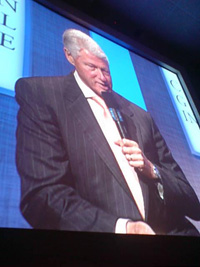 Also this afternoon, as if to emphasize the presence of new media here, Larry Page, the Google co-founder, shared the stage with Mr. Clinton and YouTube co-founder Steve Chen to talk about a new section YouTube is building to help non-profits raise money.  The company’s news release described the new project this way: “YouTube’s 2007/2008 Clinton Global Initiative commitment enables nonprofit organizations (in the U.S. those with 501c3 tax filing status) that register for the program to receive a free nonprofit specific YouTube channel where they can upload footage of their work, public service announcements, calls to action and more. The channel will also allow them to collect donations with no processing costs using the newly launched Google Checkout for Non-Profits. YouTube’s global platform enables nonprofits to deliver their message, showcase their impact and needs, and encourage supporters to take action.”

It’s important and representative of the current media age that this event, which is defined by news of opportunity and promise, is taken so seriously by the new media. The news conferences are dominated by bloggers and independent news organizations from around the world.

The transparent and unavoidable conclusion is that the 20th century American journalistic principles and values — if it bleeds it leads — don’t fit here. The BBC broadcast a half-hour talk show from here that featured Mr. Clinton and New York Mayor Michael Bloomberg discussing the green economic development strategy that has revived the city’s economy. No American national news broadcaster devoted even a few minutes to the initiative’s ideas or personalities.

The sort of transactions that occur at this conference — funders putting projects together with government and non-profits to do such things as educate women in Africa — are understood as vital to the world’s progress by the new media. They’re not, however, seen as news by enough conventional American news organizations. As a writer who contributes to both I worry. The old media’s frame needs to adjust to new conditions. The new media’s capacity to develop the revenue streams that enable its writers and producers to really dig in needs to improve. The unmistakable conclusion I draw is that with the complexity and confusion that abounds in helping the world understand itself, people just need solid facts and real stories. The world, in short, needs great media in whatever form it’s produced.

Circle of Blue Honored by Society of Environmental Journalists