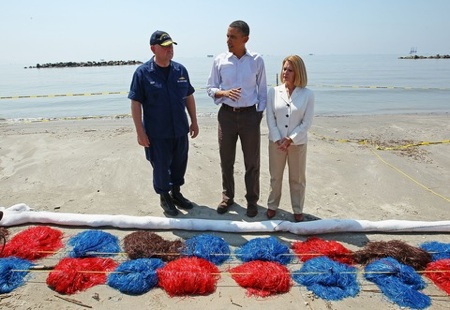 In calling for a new “national mission” to achieve energy independence during his Oval Office address earlier this week, President Obama was clearly seeking inspiration from his predecessors, a number of whom actually achieved the big technological goals they’d pursued. At various inflection points in the nation’s history, presidents managed to cross the country with a unified rail line, developed the powerful bombs in the Manhattan Project that ended World War Two, and sent men and returned them safely from the moon with the Apollo program.

In pursuit of energy independence the president has described many steps to make the transition to a clean energy economy, but never specified a timetable or a deadline. There’s a reason for that, as Jon Stewart astutely pointed out this week on The Daily Show. Seven presidents before Obama, starting with Richard Nixon, did just that and came up with zilch.

It’s not that he isn’t trying. To his credit, President Obama has acted on his election promise to change the rules of the oil game, and to begin responding to the worst of its economic and environmental consequences, including climate change.

In February 2009 he signed the American Recovery and Reinvestment Act, which invests over $100 billion in clean energy equipment, practices, and transit.  In September 2009 the president called on the world to cut greenhouse gas emissions during a speech at the United Nations and was one of the heads of state at the G20 economic summit in Pittsburgh, which issued a formal declaration to eliminate subsidies for fossil fuel.

Two months ago, the administration issued new fuel mileage and carbon emissions standards for cars and light trucks that will take effect in 2012 and over the first five years reduce oil use by 1.8 billion barrels, says the E.P.A., and cut greenhouse gas emissions by 900 million tons. And last month the president ordered up similar new efficiency and emissions reductions standards for heavy trucks. (link to Michigan piece)

Then came the BP Gulf catastrophe, now in its 60th day, which has turned the nation’s attention to all of the dimensions of what Obama and other presidents have called an “addiction” to oil, but which can also be accurately described as America’s steadfast devotion.

Obama knows that actually producing more energy at home than America imports, and making good on the greenhouse gas reducing commitments the president made last year in the Copenhagen Accord, takes another level of engagement. It means opening a new era of political partnership in Washington and pursuing much more aggressive designs for non-polluting and energy efficient economic growth.

The problem is that America is in a place it’s rarely encountered, which is stuck. Some 24 million gallons of oil – the government’s latest estimate – is gushing every 10 days from a hole at the bottom of the Gulf.  The president is unable to summon the technical skills needed to plug the leak. Instead he’s using legal and policy tools available to him to begin rebuilding the Minerals Management Service, promised more rigorous oversight of deep water drilling, and convinced BP on Wednesday to set aside $20 billion in a precedent-setting disaster restoration fund.

Decent responses as far as they can go. But not to the president’s opponents. Fox News commentators mounted a national right wing broadcast chorus to defend the oil industry and accuse the president of “demonizing” BP. The next day, in an instance as revealing as it was enraging, Representative Joe Barton of Texas, a senior lawmaker who receives more oil industry donations than any other House member, appeared at an oversight hearing on the spill to apologize to BP’s chairman for the president’s action in creating the restoration fund, which he called a “shakedown.”

Never has the United States sustained such a large oil disaster. Never have so many biologically rich coastal estuaries been in the path of so much oil. Never has the United States been so unprepared to respond to a manmade calamity that is producing so much damage to the people, the economy, and the environment of so many states. Never has the U.S. imported more of its oil or been further from achieving energy independence. Representative Barton’s apology, like so many other moments since the Deepwater Horizon exploded on April 20, illustrated just how grueling the last decades of the Age of Oil will be.

Go Blue! “Be Nice” While You “Shape Destiny,” Obama Counsels at University of Michigan Commencement