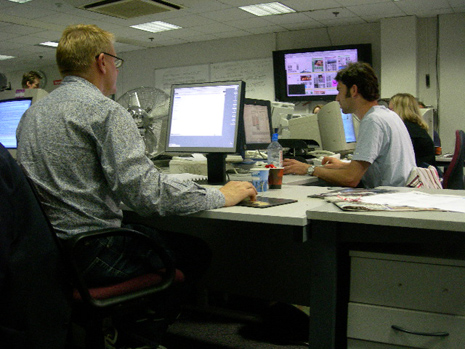 John Bebow, an active member of the association of newsies-who-became-public-interest-advocates, sent an interesting item in his weekly email alert about the emergence of online news organizations in the Midwest. John diverged from a decorated daily news career,  that included stops at the Detroit News and Chicago Tribune, to become the executive director of the Center For Michigan, a nearly two-year-old non-profit that focuses on state economic and competitiveness issues that was founded by Phil Powers, the founder and former owner of a successful chain of newspapers in southern Michigan.

Mr. Bebow notes that “traditional newspaper newsrooms continue to shrivel. In Michigan this year, the Booth papers closed their Lansing bureau. Gannett papers in cities ranging from Battle Creek to Detroit are cutting staffs with buyouts and, in some cases, layoffs. And Detroit News Business Editor Mark Truby, widely respected as one of the very best journalists in the state, left for a corporate job at Ford and, in the process, became the latest in a long line of veteran journalists (including your newsletter author) to leave newsrooms for other opportunities. In the face of these declines in traditional media, new kinds of journalism — funded by philanthropy — are cropping up all over the place. Michigan is ripe with great stories waiting to be told and meaty issues deserving of in-depth coverage. Journalism funded by philanthropy is a great hope for the future of public discourse in Michigan.”

Part of John’s post is personally satisfying. Of the five independent online news organizations he cited, I’ve been deeply involved in two, the Michigan Land Use Institute and Circle of Blue, both based in Traverse City. They reflect the ability of talented journalists, editors, producers, and graphic designers to make the complex simple — land use and economic policy in the Institute’s case, the global freshwater crisis for Circle of Blue — and produce consistently compelling work that is reaching large audiences. The 21st break-up of mass — mass media, mass audiences, mass marketing — has opened the opportunity for news organizations to be small, nimble, very good, attract significant numbers of visitors, have influence, and be financially successful.

The other side of that trend, of course, is that the large news organizations of the 20th century, designed to reach the masses, are struggling to develop the new business model.

The New York Times, which literally shrunk the size of the pages of its print edition a few months ago, is likely to survive as a global news organization because it is great, and it is building an exceptional Web presence that attracts seven or eight times more readers to its online report than its print newspaper. But it’s only a matter of time, probably sooner than later, before the Times decides that all that infrastructure — forests, paper plants, printing plants, delivery trucks and the rest — needed to deliver a paper edition to roughly 1 million readers a day is just not worth the trouble. About 20 percent of what I write for the Times now heads to what editors call the “web-only”  report.

Regional daily newspapers and many general interest magazines, though, may not survive in print or online. The cost of maintaining 50 or 100-member newsrooms at roughly $100,000 a person (including taxes and benefits) is just too high.

The other intriguing portion of John’s alert concerned a number of prominent old-school journalists in Minneapolis who say they’ve raised over $1.2 million to open Minnpost.com, a new online daily set up as a non-profit.  The roster of staff and contributors numbers 45 people. Though just a handful are full or part-time payroll employees, and the rest freelancers who will earn from $100 to $600 per piece, that looks to me like a sizable weekly and monthly churn. I have no doubt that what Minnpost.com publishes will be useful. Journalists love adventure and challenge and Minnpost.com is both. I wish the group great success.

But as an observer of new models I have a question. Will this distinctive mixing of strategies — large numbers of reporters seeking to succeed financially in an online news world that rewards compact newsrooms — survive? And if it does, will Minnpost.com have invented something important for readers and their communities?

The new online journalism models that have been successful — Grist, Alternet, MLUI, Sightline, MetroMode, Truth Dig, Talking Points Memo, Newwest.net, Voice of San Diego, and others — thrived because they were good and small. A few editors, a small number of journalists, a graphic designer or two, a Web producer, a multi-media producer. That is especially important for the online non-profits because attracting donors and foundations is hard work. Though foundations say they admire communications, and call on their grantees to pay attention to what they say and how they say it, grants for communications are some of the toughest money to find. The measurements of success, as defined by philanthropies and donors, can be murky. Is it readership, page views, changes in policy?

One small news operation that became large is Slate, which operates on a profit model, is owned by the Washington Post, has 59 editorial staff members, and was fortunate to have Bill Gates’ money to get started in 1996.

I don’t know of any independents, especially a startup online non-profit daiy news operation set to launch on November 8, that ever had as many journalists ready to go as Minnpost. com. It is for that reason alone that if they’re still here a year from today it’s a potentially enormous breakthrough for regional media. I join a number of my colleagues in the online news world in wishing our friends in Minneapolis the best.