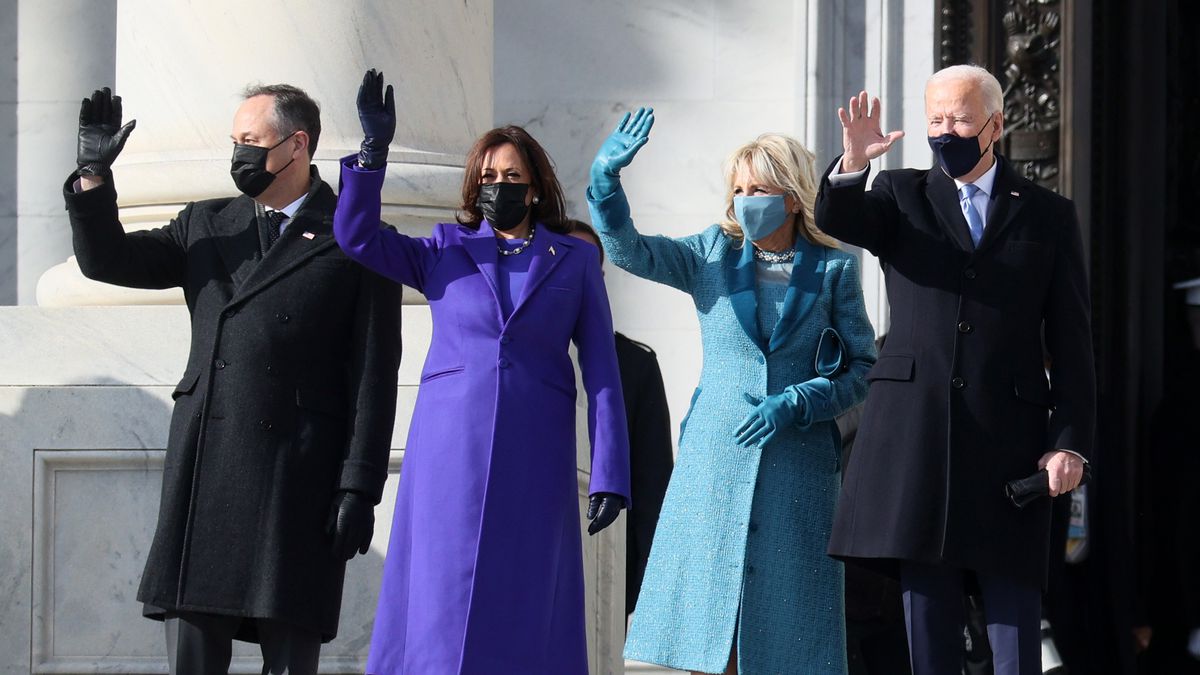 SOMERSET, KY. — The English translation to the Shehechiyanu, my favorite Hebrew prayer, commends “our God, Ruler of the Universe, who grants us life, sustains us, and enables us to reach this day.”

The prayer (Sha-heck-key-yaanu ) was on my lips as President Joe Biden was sworn into office today. It was followed by shrieks and shouts as I hugged my wife, clasped hands with my brother-in-law, and bellowed my joy into the streets of this small Kentucky city where Democrats are not yet, but hopefully will be more supported.

What a great day! I’m relieved. I’m elated. I’m optimistic. I’m aware and respectful of how fraught the next two years will be.

I’ve had this feeling, or at least something like it, before. When I was still in my 30s I spent an hour with a massage therapist who worked her strong hands into my muscles and bones. She told me it would relieve stress. I didn’t know then that a massage also releases accumulations of toxins produced by years of angst, and that those who are ambitious store this kind of stress in ample quantities, unaware of its toxicity.

It took me days to recover from that session. For sure it drained the toxins. It left my body sore and my muscles depleted of energy. But I also remember its healing properties expressed in a sense of relief, even elation, that I’d never experienced.

That’s what I felt again today. Sore from four years of Donald Trump’s presidency. Jubilant about the inauguration. Relieved that America elected a president and vice president who reflect the best ideals of the country and have the desire, experience, and expertise to lead a renewal. Gratified that they call upon all to participate. Biden talked today about those qualities, what he called “our uniquely American way: restless, bold, optimistic, and set our sights on the nation we can be and we must be.”

What a contrast. I don’t want to devote any more space to writing about Trump. I did plenty of that last year on ModeShift here and here. Still, it’s essential to remember that four years ago President Trump delivered an inaugural address that was a bellicose dissent to unity, a homage to what he called “American carnage.”

We cannot ever let this happen again. From the first moment of Trump’s inauguration, the American experience could hardly have been uglier or more dangerous. Having never cared enough to master the job, Trump posed as a president. He spent his time tweeting, golfing, and preening to attract attention. Kentucky Senator Mitch McConnell managed the Republican legislative and court packing agenda. Stephen Miller, Steve Bannon and Bill Barr helped Trump attack Democracy and wear away the foundations of American stability.

What a record. More than 410,000 Americans are dead, as of today, from a virus that Trump politicized when he called the pandemic the Democrats’ “new hoax.” The virus blew up hospitals, businesses, careers and wage-earning jobs. News networks competed to broadcast Trump’s lies. Helped by Republican opportunists ready to insist the lies were true, tens of millions of citizens blindly absorbed their words as gospel. How Trump was beloved by 74 million Americans is beyond my capacity to understand.

The utter truth is that Donald Trump left the country in a mess. His Big Lie was an excuse for losing. He repeated it endlessly from November to January. He leaned on state election officials to change voting tallies. Two weeks before he was ushered out of the White House, Trump uttered the Big Lie a final time, and incited a violent mob to attack the Capitol. It is inconceivable that a significant number of Republicans in the weeks after said in opinion polls that they thought the attack was justified.

And because of the virus and the threat of violence, Trump robbed Americans of the privilege of attending Biden and Harris’s inaugural. He denied Black American women the joy of celebrating one of their own — our own — being sworn in as vice president. But he did not, could not, will not, rob Americans of the beautiful promise of hope and renewal that was the message of the day in our nation’s capital.

Not since Lincoln or Roosevelt has an American president been inaugurated at a moment of such emergency. The flames of dissension and upheaval are hot. Yet Joe Biden presents himself as kind of a captain to a firefighting brigade. He’s positioning the country to battle this wildfire of cultural, economic, and racial distress and political anarchy.

Is he capable of cooling the fire? He’s got experience and skills. Confidence in his leadership is very high among the 81 million Americans who voted for him, and I suspect after today, for millions who did not. Biden’s inaugural address, like a fireline backpack, was filled with the right rhetorical tools and delivered with deliberate timing, resounding composure, empathy and compassion. Biden described in detail the fuel generating the hot flames threatening the country. He included among them the requirement of any civil society to “defend the truth and defeat the lies.” He called on Americans to revive the spirit of national unity, the missing element that can lead to restoration and renewal. Together.

Pitch perfect in language and message, many critics called Biden’s speech one of the best inaugural addresses in history. Blending realism with optimism, every line either made reference to the diminished condition of the country or resonated with the call for healing, restoration, and renewal. “The answer is not to turn inward, to retreat into competing factions, distrusting those who don’t look like you or worship the way you do, or don’t get their news from the same sources you do,” he said. “We must end this uncivil war that pits red against blue, rural vs. urban, conservative vs. liberal. We can do this if we open our souls instead of hardening our hearts. If we show a little tolerance and humility, and if we’re willing to stand in the other person’s shoes.”

“That’s how it has to be. That’s what we do for one another. And if we are this way, our country will be stronger, more prosperous, more ready for the future. And we can still disagree.”

As anyone knows who lives west of the Mississippi River, wildfires are getting bigger, more numerous, and more dangerous. It was the same for the cultural and political temperature in America. After four years of “uncivil war,” convincing people to embrace alliances as a strategy for quenching the fire and renewing the national spirit is a challenge fit for Hollywood. But anything less, with the country pitched at such a dangerous precipice, could be catastrophic.

Like almost everyone I know, my hope lies with Joe Biden doing what he did during the campaign. Surprising people who underestimated him, rising to the challenge of rescuing the country.

“Folks, this is a time of testing,” Biden said. “We face an attack on our democracy and on truth, a raging virus, growing inequity, the sting of systemic racism, a climate in crisis, America’s role in the world. Any one of these will be enough to challenge us in profound ways. But the fact is, we face them all at once, presenting this nation with one of the gravest responsibilities we’ve had. Now we’re going to be tested. Are we going to step up? All of us? It’s time for boldness, for there is so much to do. And this is certain, I promise you: We will be judged, you and I, by how we resolve these cascading crises of our era.”

I love another Hebrew prayer, the Mi Shebeirach (Me-Sha-ba-rach) that fits this moment, and celebrates my abiding faith in Joe Biden’s commitment to lead with courage and intelligence. “When pain and fatigue are my companions, let there be room in my heart for strength,” it says. “When days and nights are filled with darkness, let the light of courage find its place.”

Biden Will Win; America Will Reject Lies and Hate