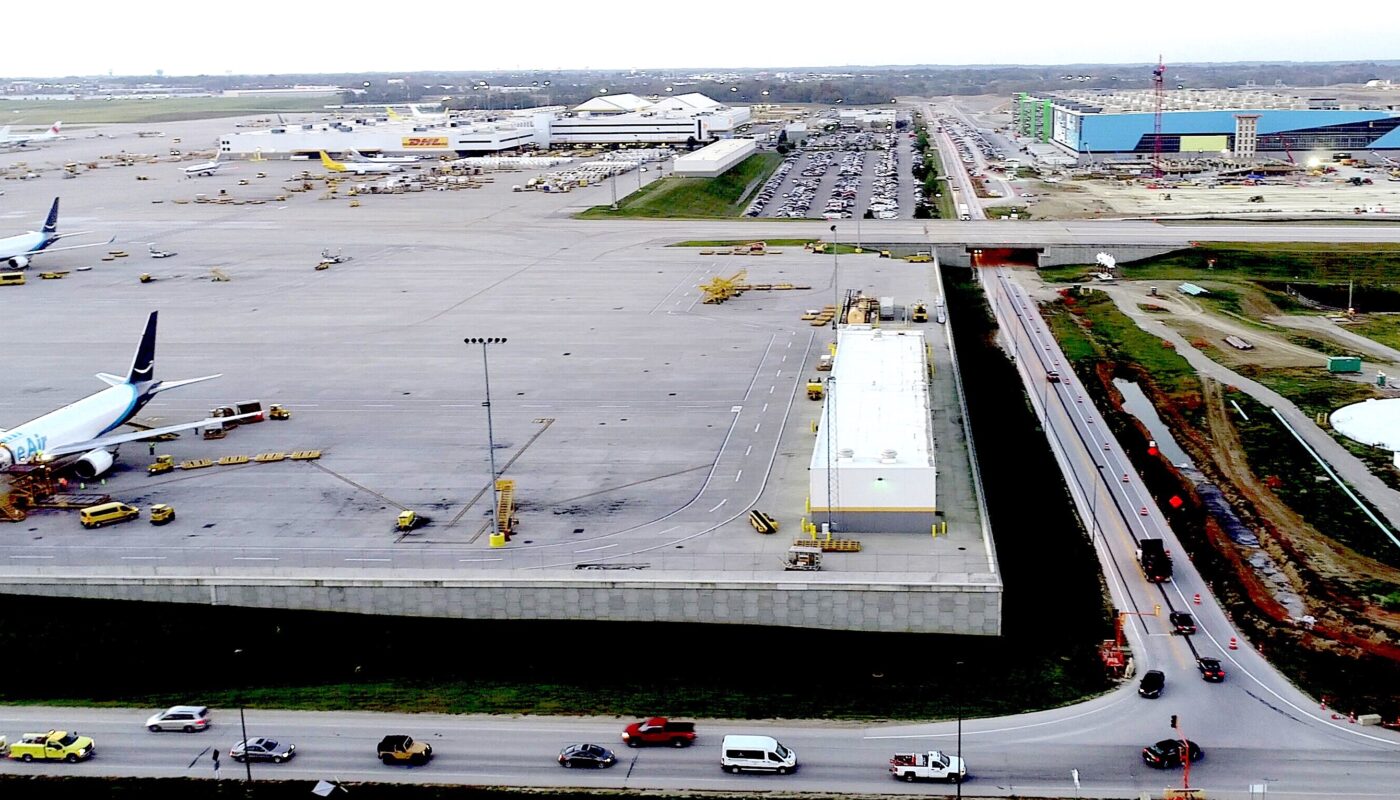 HEBRON, Ky. – Since the pandemic started nearly a year ago, 15,000 fewer people arrive and depart daily from CVG, Cincinnati/Northern Kentucky International Airport. Yet the 60 percent drop in passenger traffic is not nearly so apparent on the four runways, miles of taxiways, and hundreds of acres of concrete apron handling record amounts of air cargo — nearly 4,000 tons a day.

Ranked by the Federal Aviation Administration as the nation’s sixth largest cargo airport, CVG’s standing is about to climb higher. On January 12, the New York Times published a version of this account on its Square Feet page. I’ve written quite a number of Square Feet articles over the years, 71 in fact from 24 states and one foreign country.

Amazon Air, the e-commerce giant’s five-year-old cargo airline, is completing a 798,000-square-foot sorting facility, seven-level parking structure, acres of freshly poured concrete, and enough apron space to accommodate 20 aircraft. The new facility, under construction on a 640-acre site along the airport’s southern boundary, is scheduled to open in the fall. It represents about a third of the $1.5 billion, 3 million-square-foot air cargo hub Amazon is committed to building at CVG.

“This hub is going to let us to get packages to customers faster,” said Jeff Bezos, the Amazon founder and chief executive during the ground-breaking ceremony at CVG in May 2019. “That’s a big deal. We’re going to move Prime from two days to one day. This hub is a big part of that.”

By far the largest air cargo construction project in the airport’s 74-year history, the mile-long facility will be the center of Amazon Air’s national air transport network that now counts over 70 aircraft and over 150 hundreds of daily flights to 35 other cities in the U.S. Clad in the company’s characteristic blue and white colors, the new building also is a signal measure of Amazon’s influence in online buying and its devotion to fast delivery.

Both have helped generate a wave of air cargo construction at airports across the U.S.

UPS and Amazon also operate out of older buildings at the airport, which is handling 30 percent more cargo than it did in 2019. “There is a lot of consumer behavior that permanently changed in 2020,” said Mark Thorpe, the airport’s chief executive. “We’re seeing levels of cargo today that were expected in 2028.”

Ted Stevens Anchorage International Airport, the second largest air cargo airport in the United States, is planning for $500 million in new freight and package handling and sorting facilities.The demand for more space by the airport’s cargo companies – among them Alaska Cargo & Cold Storage, 6A Aviation, FedEx, UPS, and Amazon – issoaring. As of the end of September 2020, the airport reported that over 2.3 million tons of cargo had passed through Alaska, a 9 percent increase over the same nine-month period in 2019.

Chicago Rockford International, the country’s 19thlargest air cargo airport, is building a 90,000-square-foot cargo facility, and as soon as it opens in the spring will start another 100,000-square-foot cargo project for DB Schenker,Emery Air, and Senator International. Last year Rockford completed a $22.3 million, 192,000 square 228,000 foot facility for Amazon, along with $14 million in concrete aprons sturdy enough for Boeing 747 aircraft.

“The traffic in cargo is responsible for all the new demand at airports now,” said Rex Edwards, an industry analyst and vice president of the Campbell-Hill Aviation Group, a northern Virginia consultancy. “The cargo carriers want more airport space. They need room to park planes and facilities that meet next day delivery requirements. That is the evolution of the business now.”

Before the pandemic, e-commerce sales were growing by double digits annually, pushing total air cargo to 12 million tons last year, according to the Bureau of Transportation Statistics, a unit of the federal Transportation Department. Federal analysts project that air cargo will reach 45 million tons by mid-century. But the important players in the sector – Amazon, the other big air shippers, airport executives, and airplane manufacturers – anticipate that the pandemic altered online commerce so substantially that carriers will be hauling 45 million tons a decade sooner.

Executives at Philadelphia International Airport anticipated the growing market and three years ago paid $54.5 million for 135 undeveloped acres adjacent to the airfield. The airport is now developing a master plan for the ground that includes 1.5 million square feet of cargo handling facilities. “We knew, pre-pandemic, that cargo was only going to increase,” said Stephanie Wear, the airport’s director of air and cargo services.

For the time being, Amazon is the largest influence in new airport cargo construction.

In order to serve the 14 immensefulfilment centers it built near San Bernardino and Riverside, California, Amazon established a western hub at San Bernardino International Airport. This month Amazon is finishing a 658,000-square-foot handling and sorting facility, and two smaller 25,000-square-foot buildings at the 79-year-old airport, which started as a World War Two military airfield. The $300 million project includes apron space and gates to handle 14 aircraft and 26 flights daily, said Mark Gibbs, the airport’s director of aviation.

No airport is receiving more attention from Amazon Air than Cincinnati/Northern Kentucky. The company liked what it heard from airport executives who spent the last decade diversifying CVG’s revenue and recovering from a fiscal catastrophe by recruiting air carriers and related companies to its 7,700-acre, 75-year-old airport.

In 2008, in the midst of a deep recession, Delta Air Linesunexpectedly shut its regional hub at CVG, halting more than 500 flights a day, closing terminals, and throwing the airport into a panic. Executives countered by marketing CVG’s location, a half-day drive or a short flight from most of the major metropolitan regions in the East, Midwest and South. CVG had plenty of space for development. It also is close to important Interstate highways and to Cincinnati’s renovated Ohio River shoreline and city center.

DHL got interested straightaway and arrived in 2009; four years later the German carrier completed its 1 million-square-foot North American hub. Amazon arrived in 2017 and contracts with DHL for loading and sorting at the DHL facility. FedEx also operates out of the airport.

Amazon Air’s strategy for cargo routes and ground facilities differs substantially from other carriers. Its cargo is composed of goods sold on its own online market. Its airport facilities are close to Amazon’s network of fulfilment centers.

That formula fits Amazon’s decision to settle at CVG, located on the Kentucky side of the Ohio River across from Cincinnati. Since 2010, according to the company’s data, Amazon has spent more than $15 billion in Kentucky, much of it on 10 fulfillment and sorting centers, two delivery stations, a customer service center, and two Whole Foods Markets. The company said it employs 14,500 in people in the state. Its air cargo hub will add 2,000 more jobs.

Candace McGraw, CVG’s chief executive since 2011 who led the work to recruit Amazon and the other carriers, said in an interview that the cargo strategy was essential to keeping CVG operating since March 2020, when the pandemic took hold.

Air cargo grew 14 percent in 2020 at CVG and is expected to grow at least 10 percent more in 2021 and 2022 when Amazon’s new facility is completely operational.Cargo now accounts for 75 percent of the more than $25 million in annual revenue from landing fees, the second largest source of CVG’s income — behind parking. “We learned the lesson to diversity from Delta,” said Ms. McGraw. “We’re grateful for the cargo business.”

Mode Shift Postcards From Around The Nation