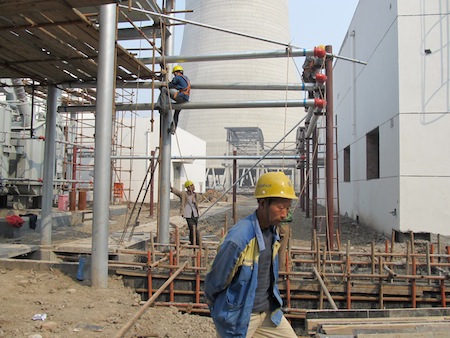 Jay Letto, a friend who oversees the annual conference of the Society of Environmental Journalists, wrote to me last week asking for my ideas and participation on a panel in October that looks at U.S. and China clean energy and environmental technology development.

The last year of reporting on energy and environment issues globally has been just about as interesting and engaging as any I’ve done — the China experience in particular. I took three long reporting trips there over six months from October to April, covering the Tianjin climate conference last year and doing the research for Circle of Blue’s Choke Point: China project, which we finish with our last piece on Tuesday. Tremendous story occurring there and it’s been a privilege to interview the people putting in place the tools and equipment that are building a nation at a scale and speed that is just off the hook. One of the early chapters in our report was about China’s non-fossil fuel sector, which is now well ahead of such development in the U.S.

I’m happy to help you frame the panel and would enjoy participating if 1) I’m here and 2) can find some dough to defray expenses. I may be in China at that time. I’ve been working with some DC-based people to line up a teaching/writing gig in Guandong in the fall. I’ll know more by summer’s end.

On the general idea,  a few thoughts:

2. China, though, is not nearly as much of a clean energy hero as some would want to believe. Reason. It’s growing so fast, and its top cultural and economic priority is to continue to grow at breakneck speed and gargantuan scale. Result: Coal production has tripled since 2000 to 3.15 billion metric tons in 2010 (more than three times US coal production and use) and is expected to increase by 1 billion more metric tons annually  by 2020. Coal supplies over 70 percent of national energy needs and will continue to linger at that level for at least the next decade, even with all the non-fossil development. Reason in part: Electrical generation in China, now about 960 gigs, is anticipated to at least double to 1,900 gigs by 2020. The U.S. also produces about 960 gigs annually. So China over the next ten years will add the equivalent of all the electrical generating capacity that it took the US 100 years to build. The environmental consequences of China’s coal-based electrical production sector is enormous for water, air, and land resources.

3. China plans to double its hydro-generating capacity to 400 gigs annually by 2020 from 213 gigs at the end of 2010. The environmental consequences to the river basins in southern China, where most of the dams are either under construction or planned, are high. The tradeoff — less coal and climate-changing emissions vs. damage to natural areas, fisheries, and human communities — is one that China has chosen to make but is producing civil unrest as well.

Last year Circle of Blue produced Choke Point: U.S. which looked closely at the contest over energy demand and water supply here. We concluded that the U.S., is devoting itself to perpetuating the fossil fuel economy in order to hold off the damage that rising energy prices is doing to our way of life. In order to produce the energy we need at current rates of demand, and to prepare for generating more as demand grows, the U.S. is quite literally going after energy resources that lie in much more difficult forms and places to tap.

The country, afraid of rising gasoline prices and unwilling to pursue cleaner alternatives at any kind of scale, appears  clearly ready to tear itself asunder and produce environmental damage that is an order of magnitude higher than we’ve sustained in previous decades. The Great Plains and Rocky Mountain West are targets of deep shale oil, gas, and tar sands development. Northern Alberta is  now the biggest mining district in the world. The Gulf Coast deepwater exploration — well we know that story now.

The point I’m making here is that the two largest economies aren’t in any competition over technology or practices to advance environmental safety. Nor are they in competition to foster fossil fuel development. In fact I found tremendous cooperation between U.S. and Chinese companies and the two governments to assist China and the U.S. in strengthening conventional energy security — Westinghouse is building China’s nuclear reactors, Peabody is financing advanced coal gasification technololgy in Tianjin (see pix above), the U.S. is assisting China’s shale gas development with technical support, and China has billions invested in North American tar sands, gas, oil, and pipeline developments.

What China and the U.S. are doing is perpetuating the fossil fuel economies of both nations, and the environmental costs of the expansion in gas, oil, coal, and tar sands developments is serious and growing. So maybe a panel that looks closely at these troubling trends in the world’s two largest economies could be something you’d also find interesting. I realize that this suggestion may take you off course and SEJ may have already done such a panel, but the big global environmental story is what’s happening with new fossil fuel development in both countries. Even with China’s new clean tech sector development, it’s a small piece of that nation’s overall energy plan for at least the next decade.