WILLISTON, ND — The Saturday morning earlier this month that Scott Terrell and I had breakfast at Gramma Sharon’s Family Restaurant, every seat was taken by roughnecks and drivers fueling up before heading out to work this state’s giant oil patch. The line of customers waiting to pay their bills was so long I did something I rarely do on reporting trips. I left cash on the table and utterly violated the ethos expressed on the hand lettered sign next to the cash register.

It said in plaintive neat cursive: “Please be patient. We are short staffed every day.”

Since the collapse of Lehman Brothers in 2008 the national background music of America’s hard recession has been the persistent lament of earnest adults unable to find work where they live. Largely missed was another soundtrack of energy-related job growth and economic activity. It steadily built into such a rumbling crescendo that the bang-bang-bang of hammer on steel is finally being heard in every corner of the country.

There’s more work in the oil fields of the northern Great Plains, Texas, Pennsylvania, Ohio, California, Colorado, Kansas, Utah, and Wyoming than there are people to do it. And almost all of it pays really well.

Scott Terrell, who turns 58 the day after Christmas, heard it. Terrell is a carpenter and painter from Coeur d’Alene, Idaho. He solved a nagging problem of underemployment in his craft in Idaho by heading across Montana and washing up on the shores of North Dakota’s riotous oil and gas boom, which has generated 45,000 new jobs. He very quickly gained work with a friend’s company driving a heavy Volvo haul truck involved in earth moving activities. He makes $20 an hour working 70 to 84 hours a week. That’s $1,600 or $1,700 a week, good money in a down economy in Idaho.

Like almost everyone you talk to, it’s not the adventure, the calling, the national moment that has attracted men here. It’s the money. “Work those many hours. I tell you I’m worn out,” Terrell said. “It’s just chaotic, every day. It’s cold. It can be dangerous. I’m away from my wife. It’s a whole different outlook from what anybody is used to.”

The surge of jobs and oil also is completely altering the economic and demographic geography of North Dakota. There are 59,000 more jobs in the state than there were before the boom. The U.S. Census reported today that North Dakota’s population surged to almost 684,000, more than at any time since the 1930s. The agency also reported that North Dakota, once described by native born journalist Eric Sevareid as a “blank spot on the nation’s mind,” is now the fifth fastest growing state in the nation. From 2000 to 2010 it ranked 37th.

The torrent of oil-related money, nearly $20 billion annually now in this state alone, is the leading edge of an estimated $100 billion-plus annual capital investment nationally by the energy, pipeline, refining, chemicals, transportation, and related services sectors that economists say appears to be leading the country out of the recession.

Today I interviewed Mark Perry, an economics professor at the University of Michigan in Flint, a resident scholar at the American Enterprise Institute, and one of the few economists who’s viewing the oil boom from a national perspective. I asked him whether the oil and gas surge in North Dakota and a dozen more states can account for at least a portion of the drop announced today in unemployment claims, and the rise in leading economic indicators. Perry said that seemed like the case.

He then pointed out a December 15 report by PricewaterhouseCoopers on the influence of the shale gas sector on American manufacturing.

That study reports that 17 major American manufacturers told the Securities and Exchange Commission this year that natural gas abundance is dramatically changing their strategic outlook. Low prices for natural gas are expected to “spark a U.S. manufacturing renaissance over the next few years,” said the PWC study, “boosting revenue and driving job creation.” The firm estimates the shale gas boom alone “could lead to approximately 1 million more manufacturing jobs by 2025.”

That renaissance looks to be in nearly full swing already. In Ohio, where the Utica Shale is starting to yield big finds of oil and gas, Vallourec, the big French pipe maker, is building a $707 million manufacturing facility in Youngstown, Ohio that has begun to employ a staff that is expected to grow to 450 workers. Mac Trailer in Kent Ohio is opening a facility to manufacture tanker trailers to haul liquids involved in hydrofracturing in the Ohio and Pennsylvania gas fields. It will eventually employ 250 workers.

Republic steel is opening a new furnace in Lorain, Ohio to manufacture steel pipe. US Steel is spending $95 million to expand one of its Ohio plants to meet demand from the gas and oil fields of the mid-Atlantic. Big chemical manufacturers are building new gas-to-liquids processing and chemical manufacturing plants in Louisiana and Texas. Truck and heavy equipment manufacturers, led by Illinois-based Caterpillar, are reporting big surges in demand for their rigs.

Here in North Dakota, Tesoro is expanding its refinery west of Bismarck and this year added 40 new workers to its staff. The regional utility is preparing to build a new gas-fired electrical generating station. Pipeline construction is occurring at a frantic pace. Burlington Northern is buying new tanker cars to haul oil to refineries in Washington State, Oklahoma, and Texas.

To gain perspective on just how powerful the energy rush is in North Dakota, just stand for a few minutes at any place alongside U.S. route 85 north or south of Williston. Semis hauling heavy equipment, pipe, water, fuel, oil, rigging, and any number of other loads roll past, an unyielding train of oil field gear and supplies and products. And in the spaces where there aren’t semis, there are pickups hauling men back and forth to the drill sites.

Five years ago, say townies, U.S. 85 in early December was as quiet as a dance floor on Tuesday morning. The resident population grew older, more bent, and steadily less numerous. Western North Dakota’s small towns were receding like shallow lakes in the desert.

Now people are predicting with perfectly straight faces that Williston, where less than 13,000 people lived at the turn of the 21st century, and now is estimated at somewhere around 20,000, could reach 50,000 in the next decade or so, maybe 100,000 — just like Midland, Texas. 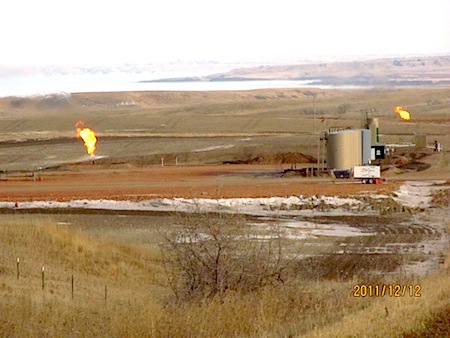 One thought on “Is American Energy Exploration and Production Breaking the Great Recession?”