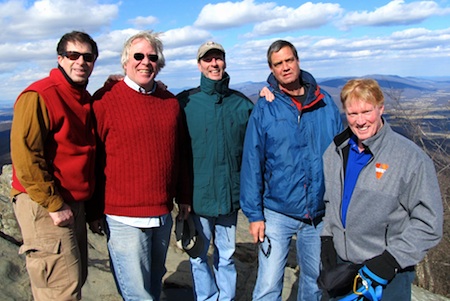 CHARLOTTESVILLE, Va. — When Bob O’Connor (far right above) was 18, he lived directly above me in a second-floor dorm room in Barclay Hall at Haverford College. He’s a big-boned guy with a quiet way, a sizable intellect, and likes to have fun.

Two upper classmen, Pete Doan and Evan Lippincott, lived across the hall from my first-floor room. Pete and Evan were dorm reps and were supposed to keep tabs on freshmen like me and Bob. They did. They bought us beer and bourbon at the state store in Ardmore.

The other important aid Pete and Evan provided was introducing their young charges to their friends. That’s how I met Andy Solberg (second from right), an Illinois boy a full foot taller than me, infinitely more amusing and intelligent, and can be charming and cranky all at the same time. We get along real well. 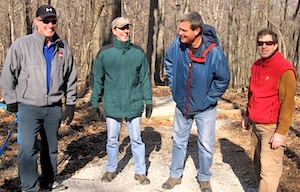 The other two guys in the picture are Jim Walker (second from left) and Pierce Homer (third from left). Jim possesses the curious and incalculably valuable capacity to talk about almost anything with depth and authentic expertise. He also knows how to relax. One morning I found him asleep in the bathtub of my junior-year Haverford Parks apartment.

Pierce is a riot, whip-smart, and our lives really connected in the years right after college when I was a young writer in Charleston and he was living in Alexandria, Va. preparing for graduate school in public administration. On reporting trips from the South to Washington, D.C. I spent nights at the carriage house with the outdoor pool that he rented in Old Town. We had a ton of fun.

Last week, for the first time in quite awhile, the five of us gathered in Charlottesville for a couple of days at the comfortable and spacious modern home that Bob shares with his wife, Sara, and youngest of four children, a daughter, Carolyn. Our time was spent climbing to the summit of Humpback Rock in a cold, gale force wind. We played pool and (good surprise) ate healthy food, including a delightful gumbo sent north from Birmingham, Ala. from Alice Walker, Jim’s wife. We did a good bit of remembering events, and friends who weren’t able to join us. We marveled at the clear sky and view of the Shenandoah blue ridge that greeted us each morning from Bob and Sara’s kitchen. Mostly, we delighted in our strong connection and company.

Robert Frost wrote, “We dance round in a ring and suppose, But the Secret sits in the middle and knows.”

The five men pictured above represent many of the highest ideals of our generation. I say that without any sense of hubris or irony. Our lives as adults have been stoked by the kindling of opportunities and distresses of our time. We thrived even as the country steadily shifted from an era of entitlement, and a dismaying sense of exceptionalism, to a new period of competition, doubt, and caprice. Had we grown up in the same era as our millennial children, worried about educational opportunities limited by diminished financial resources, competing to gain a slim hold in a nation distorted by rigid ideology and real fear, our choices and our paths would have been much different.

The secret, though, sits in the middle and knows.

These men married well and are raising fine children. They are good husbands and fathers. They all are in good health. Their ability to cultivate strong friendships is essential to their well-being.

Their work matters, too. At age 55 and 56, each constructed lives that are wonderfully relevant. Bob is professor, chair, and physician-in-chief in the Department of Emergency Medicine at the University of Virginia Health System. He spends enough time in emergency rooms, in Virginia and overseas, to save lives, lots of lives. Andy is a commander in the Metropolitan Washington, D.C. Police Department. In the 25 years he’s been with the department he helped turn Washington from one of the most dangerous cities in the country to one of the safest.

Jim’s helped to put people into homes, first as director of planning and development in Wilmington, Del. and now as a federal Housing and Urban Development official in Alabama.

While on the way out to Charlottesville, Andy and I passed underneath the new bridges and tracks that are extending the Washington Metro system 23 miles to Dulles Airport. That’s a $2.6 billion project that Pierce helped to make happen as former secretary of transportation in Virginia.

I came away from those two days feeling so content, humbled by the fortune of lifelong friendship with these men, and privileged to know that our adventure together moves forward. 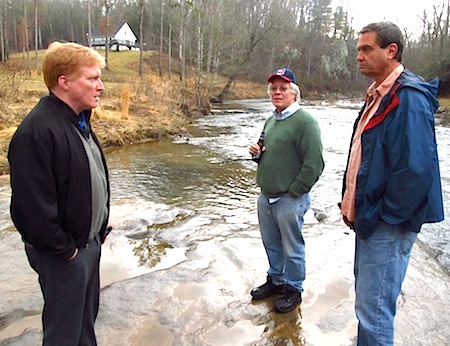