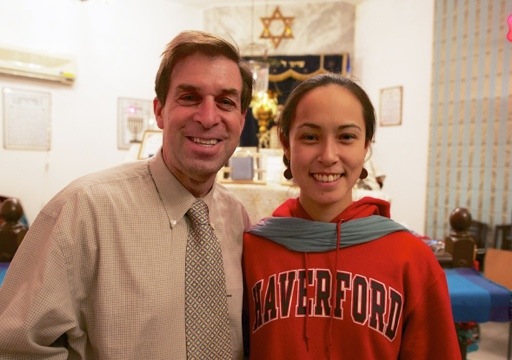 Abigail Wacker, a Fulbright scholar and fellow Haverford alum, class of 2010, with me at the Judah Hyam Shabbat evening service in New Delhi. Photo/J. Carl Ganter

NEW DELHI — Abigail Wacker’s red Haverford College sweatshirt was the second thing I noticed early Friday evening at the Judah Hyam Synagogue here in India’s capital city. The first was the group of students sitting next to her earnestly listening to Ezekiel Isaac Malekar, the congregation’s spiritual leader.

Abigail looked at me. She looked down at the black and white lettering across her chest — HAVERFORD. She smiled and nodded. “Yes,” she said. “Haverford College.”

You learn over the years that if you’re fortunate you’ll build a select few circles of intimacy and connection. Family. Friends. Those, very plainly, are the first two. And one or two more.

My Jewish heritage and faith connects me to other Jews. That’s what led me to the Judah Hyam Synagogue, the only Jewish temple in New Delhi. I knew there would be instant kinship and there was. Ezekiel Malekar directs an all-Hebrew service full of song and love. Friday night he asked me to join him on the bihmah, where I read and chanted more Hebrew than any time since my Bar Mitzvah, and that was in April 1969. My Circle of Blue colleagues J. Carl Ganter and Aubrey Parker joined me for their first-ever Jewish temple service.

Haverford, founded on Philadelphia’s suburban Main Line, is small, academically rigorous, distinctive for its commitments to integrity and exploration, and amply fortified today by wonderfully gifted students and recent graduates who are smarter and more talented than we were in our day. I know this because in the late 1990s the Michigan Land Use Institute, with the help of a group of Haverford alumni that funded the project, launched a paid writing and reporting internship that recruited Haverford students to our office in northern Michigan. Every one of those students was first-rate in every way.

So I wasn’t surprised, even in the few minutes that we talked, at how impressive Abigail Wacker is. She’s from Maryland, majored in English, spent time as an undergraduate in India, won a Fulbright scholarship, and now volunteers with Manzil, a learning center for Delhi youth. Abigail told me she teaches after school programs and helps with administration. I’ll learn more when I return to Delhi on December 21. Abigail invited me to talk to her students about Circle of Blue’s work here and around the world. After all, one Ford to another. 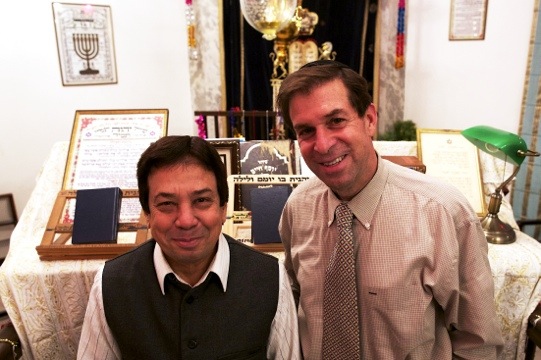 With me is Ezekiel Malekar, the congregation’s spiritual leader, and a gracious man continuing a history of Jewish worship in India that stretches back to the Inquisition. Photo/J. Carl Ganter

TII: This is India