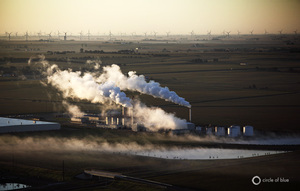 Earlier this summer my colleagues and I began probing the tightening environmental and economic choke points around the United States caused by rising energy production and diminishing quantities of fresh water. This week we broke a new chapter in the story that described a far-reaching federal program of research and analysis, funded by Congress and designed to help the nation anticipate and temper the mounting conflict between rising energy demand and diminishing supplies of fresh water, has been brought to a standstill by the Department of Energy.

The research program, known as the National Energy-Water Roadmap and ordered up by Congress as part of the 2005 Energy Security Act, was meant to provide lawmakers and the executive branch two studies of the impending collision between energy and water, as well as what to do about it.

The first report, completed by a team of federal scientists in December 2006 and made public a month later, described the serious consequences the nation is already encountering as the U.S. encourages more energy production– the second largest user of water– while giving scant consideration to water supplies, which are in retreat in most parts of the country.

But the second and final report that Congress commissioned, a comprehensive research agenda to better understand the nation’s energy-water choke points and begin developing real world solutions, has been held out of public view for more than four years. Michael Hightower, an energy systems analyst at Sandia National Laboratories and a co-author, said the first draft of the Road Map on research needs was delivered to the Energy Department in July 2006. Energy Department reviewers have since called for 22 rewrites, the last of which was delivered in May 2009, he said.

Since then, the five-member team that co-authored the study has not had any communication about the report with the two primary reviewers.

“I don’t know why they are holding up the report,” said Hightower in an interview with Circle of Blue. “I can only conclude we don’t know how to write or they don’t like the report. I think we have done a nice job in collecting the data. Maybe the quality is in question.”

Circle of Blue’s report is the latest chapter in the Choke Point: U.S. series, a penetrating exploration of the fierce contest between the nation’s growing demand for energy, and the tightening supplies of fresh water.

Next to agriculture, energy production withdraws and uses more water than any other sector of the American economy. The Choke Point: U.S. report, which started on August 3 with a dispatch from the southern Virginia coal fields, and has added new chapters weekly, makes a strong case that the United States quickly needs to reconsider and realign much of its energy production policy and water management practices in order to avoid dire shortages of water and potential shortfalls in energy. None of the big energy producers or large water use sectors will be left untouched.

The complete findings of Choke Point: U.S. will be presented later this month at the Woodrow Wilson International Center For Scholars in Washington, D.C. The public event, Choke Point: U.S. Understanding the Tightening Conflict Between Energy and Water in the Era of Climate Change, occurs on September 22, 2010, from 9:00 a.m. to 11:00 a.m.

In Solar Power Lies Path to Reducing Water Use For Energy

California Drought is No Problem for Kern County Oil Producers