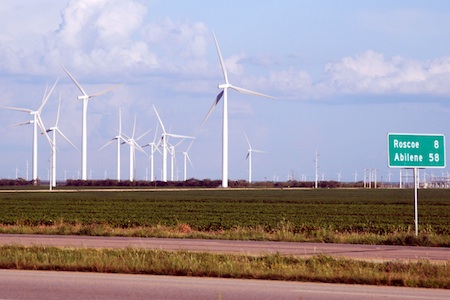 Kate Gailbraith, a reporter for the very accomplished non-profit and online Texas Tribune, has a report from the Lone Star state about grassroots opposition to a new $5 billion transmission line to carry power from all those windmills down there. Texas is the largest wind generating state in the country, with a capacity of nearly 9,500 megawatts at the end of 2009, or roughly equal to 10 big coal-fired plants. Opposition to new transmission lines, as Mode Shift reported earlier this year, is becoming more common and impeding development of the low-carbon power that will help temper climate change.

Here’s how Kate started the piece:

“As Robert Weatherford’s Ford Expedition climbs and dips through the Hill Country, over creeks beds and past oak-covered slopes, he explains the sensitivities of the residents who populate this rugged yet placid area of Central Texas. “These are the kind of views people are willing to pay a little bit more for,” he says.

Weatherford and others in this scenic slice of the state fear that those views — not to mention property values — are threatened by gigantic power lines needed for the transmission of wind power. The Lower Colorado River Authority, or LCRA, wants to build two high-voltage lines through the Hill Country as part of a $5 billion project to carry electricity from West Texas windmills to Central and East Texas homes and businesses.

Landowners from all parts of Texas are fighting the power lines. But the loudest howls have come from the Hill Country, which residents and visitors alike cherish for its unspoiled vistas. The anti-power line crowd has been on a roll: In April, the state’s Public Utility Commission, or PUC, which oversees the transmission build-out, rejected the route proposals for one of the LCRA’s lines, which would have run from the Fredericksburg area to Lampasas County — the first such rejection issued by the commission. Regulators are also studying alternatives to the second Hill Country line the utility plans to build.”

A Philippine Struggle Over Coal-Fired Power

In Era of Turmoil, Top of the World is Melting