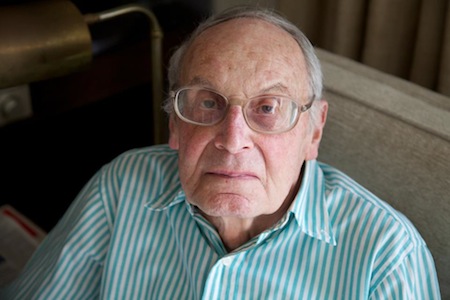 When you ask his friends and family what they most admired about Donald Spitzer, the answers included his quick wit, his considerable intelligence, and his great love for family and friends.

They also note that in a family of gifted athletes Donald was tall and slim and gawky. And in a family of rugged Hungarian men  skilled in pounding wrought iron into graceful swirls and curves, Donald trained to be a graphic artist in the last tough years of the Great Depression. He was, in short, a gentle man interested in space and lines and colors, and so easily contented that his comfort zone only rarely stretched much further than the home on Michaels Lane in Croton-on-Hudson, New York where he lived for 54 years.

Or so it seemed.

What most people did not know is that Donald Spitzer, who was 94 when he died after a short illness on November 16, 2011, was also a man of immense courage and purpose,  a combat military policeman who directed soldiers and traffic in the dark and blood on Omaha Beach on June 6 and June 7, 1944 and saved dozens, if not hundreds of lives. 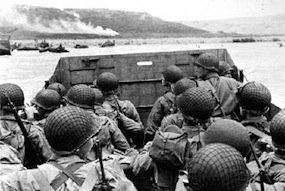 Donnie, as I knew him, was my great uncle, the younger brother to my grandfather, Al Spitzer. He was the last surviving of  seven children raised on Sacramento Street in Cambridge, Massachusetts by Alexander and Katherine Spitzer. The oldest Spitzer child, a daughter named Theresa, was born in 1906. Donald’s death marks the end of an era in my family that spanned 105 years.

The story of Uncle Donnie’s bravery in the early hours of the Normandy invasion was told to me this week by Ed Malsberg, Donald’s closest friend since they met at the Massachusetts College of Art in Boston in 1936.

On June 6, 1944, Donald was a 27-year-old combat military policeman aboard an Army amphibious landing vehicle loaded with nearly 40 other frightened soldiers and approaching Omaha Beach in the late afternoon between the invasion’s first and second waves. The vehicle’s commander, Spitzer told Malsberg, decided to delay his vessel’s landing until night fell to avoid the murderous German defenses. But once the landing craft reached the beach and lowered its ramp into the surf and exploding crossfire, the soldiers didn’t move until Spitzer screamed into the dark: “Let’s Go! Get off of here or we’re all going to die!”

In a military invasion that produced 80 percent casualties during its earliest stages, Donald’s call to action prompted his military brothers to leap out of the craft and hustle to shore. Just three men were killed.

In the hours that followed, the tall and gaunt young policeman performed his duties on the beach without rest, guiding waves of soldiers and equipment to safety. At one point a colonel came by to order Spitzer to direct traffic toward a crest and dune in another direction. Spitzer ignored him. He knew there were German mines where the colonel pointed and that many Americans would die crossing the area. When the senior officer passed, Spitzer kept sending soldiers to a place on the beach that was safer.

Spitzer’s grit and determined presence on the beach, and later on the ridge above, signaling and guiding and managing the flow of soldiers and equipment, made him one of the invasion’s memorable figures. Much later in his life, while serving as the art director at the short-lived World Journal Tribune newspaper in New York in the late 1960s, a reporter at the new paper and a Normandy veteran recognized him and then wrote an article for Argosy Magazine about the “tall, gaunt, lonely figure” who directed traffic at Normandy.

“He said he never expected to survive,” said Ed Malsberg. “I asked if he was afraid. He said he was afraid but he did what he was expected to do. Troops landed and he had to stand there while the bullets were flying. If you know Donald, he seems the most unlikely person to be in that position. He was gentle, and all angles, and had poor eyesight.”

Mark Spitzer, his 57-year-old son and only child (see pix below with wife Kamila),  didn’t know many of the details of his Normandy service. “He never talked about World War Two,” Mark told me this week. “He couldn’t sit through “Saving Private Ryan.” He did say that the water was blood red.” 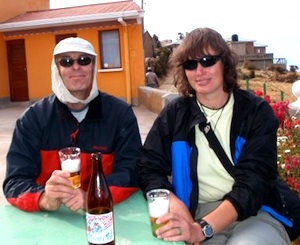 Donald David Spitzer was born in Cambridge on May 15, 1917, the second youngest of four boys and three girls raised in a stern Germanic home headed by an immigrant Jewish Hungarian master wrought iron craftsman. While his older brothers, Al and Richie, developed the hard muscles and the durable iron values of their father, Donald’s wiry frame and expressive spirit was clearly influenced by his sweet and generous mother.

For a time in the mid-1930s he sought to be part of the family business, making and installing great masterworks of wrought iron. After graduating from Cambridge High and Latin School he spent two years studying engineering at Boston University.

In 1936, though, he changed direction and enrolled at the Massachusetts College of Art, where he trained in graphic art and also served as the president of his senior class. He graduated in 1940 with the equivalent today of a Bachelor of Fine Arts.

During World War Two Donald was sent to Rutgers University to briefly study combat engineering but ended up at Fort Belvoir, in Fairfax County, Virginia, south of Washington, D.C. Malsberg, who also enlisted and served as a Stars and Stripes illustrator, spotted his friend there one day on a truck collecting garbage.

Months later their paths crossed again at Camp Reynolds, near Pittsburgh, a busy itinerant base, lit at night by the red fires of nearby blast furnaces, where men were mustered before being sent to Europe. Malsberg recalls that one evening, early in his stay at the camp, he was lying on his bunk and looked up to see a wooden clothes hanger with the name Donald D. Spitzer neatly spelled out in black lettering.

“He was very methodical like that,” said Malsberg. “That’s how I knew he’d gone overseas. It was an incredible coincidence. I interpreted it as showing how we were together almost all the time.”

The next time the two friends came into contact was in the late spring of 1945 when Donald, then serving as a field headquarters clerk in Belgium with access to telephones and personnel files, tracked Ed down. Malsberg was stationed in Paris. One day in June Ed took an unexpected call. On the other end of the line was Donald, who was in the city on leave. The two soldier/artists spent the day drinking cognac and sight-seeing and ended up at Montmartre, where the French impressionists used to hang out. “It was a miracle how he found me,” said Malsberg.

After the war ended, Malsberg convinced Spitzer and two other college classmates — Don MacKay and Clifford Geary — to move from Boston to New York, where they felt their career prospects were keener. The four men rented two apartments at 433 West 45th Street, a five-story walkup tenement in the Hell’s Kitchen section of Manhattan. Malsberg lived on the fourth floor. Spitzer lived on the fifth.

Among their neighbors, and close friends, was a young married couple from the Midwest, Charlton Heston and Lydia Clark, who’d graduated from Northwestern University and were starting their acting careers in New York. Donald and his friends celebrated in 1947 when Charlton, whom they called Chuck, played Caesar’s lieutenant in a Broadway production of Shakespeare’s “Antony and Cleopatra.” Lydia’s first Broadway role was opposite Chester Morris in “Detective Story.”

Donald quickly launched a successful freelance graphic design career that earned him an interview and then a job in 1947 as assistant art director of the New York Herald Tribune, one of the country’s great newspapers. He also met a young legal secretary from Amesbury, Massachusetts, who in March 1951 became his wife,  Ruth Spitzer. Three years later their son, Mark Spitzer, now an emergency medicine specialist in West Virginia and an avid rock climber and adventurer, was born.

“Donald lived vicariously through his son’s world travel and adventures while he and Ruth lived a quiet life in Croton,” said Jo-Anne Spitzer Schneider, his niece. “He really enjoyed what Mark was doing and his son’s adventurous life.”

Donald’s career at the Herald Tribune ended when the paper closed in 1966. Its newsroom and assets merged with several more papers to form the World Journal Tribune, where Spitzer was named art director. Donald served long enough to participate in the original design of New York Magazine. He then heeded Ed Malsberg’s advice to see one of his friends at Reader’s Digest, where Donald was hired as art editor for the large book division based in Manhattan.

His first book project was an illustrated Bible. Noting his company’s strength in synthesizing articles and literature into short and lively reads, he joked about the company’s Bible. “Well,” he said, ” we got it down to seven commandments.” His work earned Spitzer a national design award for a book on car care, and he retired from Reader’s Digest in 1984.

By then, he and Ruth had been living in Croton-on-Hudson for 27 years in a white house just a few miles from Ossining, where Ed Malsberg settled in 1952. He took great interest in his family’s exploits, talking to his brothers and sisters who’d moved to Florida, keeping in touch with Mark, staying in touch with nieces and nephews, reading, discussing politics (he was a Big D Democrat), hanging out with Ruth and Ed and friends. His mind was sharp. He was gracious and happy. “He was cool and I loved him,” said Mark.

On October 13, 2011 Ruth died after a long illness at age 89.  Five weeks later Donald was gone, too. “He had a very stable life,” said Ed Malsberg. “He was recognized as an art director of good taste and he was pretty contented. It wasn’t a dramatic life. He wasn’t adventurous. He was a very loyal friend and people liked him.” 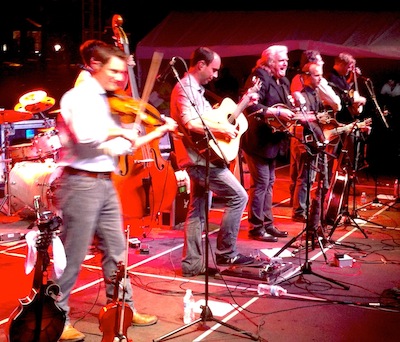 8 thoughts on “Donald Spitzer, Last Of A Great Cambridge Family, Is Gone”