Nielsen Buzzmetrics, which has offices in New York and Cincinnati, is one of the top shops for using Internet search engine technology and sophisticated analysis programs to understand consumer attitudes and predict powerful trends. The company combs millions of conversations occurring on blogs, message boards, and in chat rooms, sifts out salient details, and analyzes the results to forecast consumer behavior and values.

Earlier this month Pete Blackshaw, one of the company’s senior leaders, published a Buzzmetrics brand association map (see graphic) that outlines just how deeply environmental values and ideas have penetrated in American society.  The connection that Americans are now intuitively making between the term “eco-friendly”  and such things as building materials, transportation fuels, and lifestyle choices helps to explain why green ideas are so hot, and to some extent, why cities are experiencing a powerful demographic and economic revival. 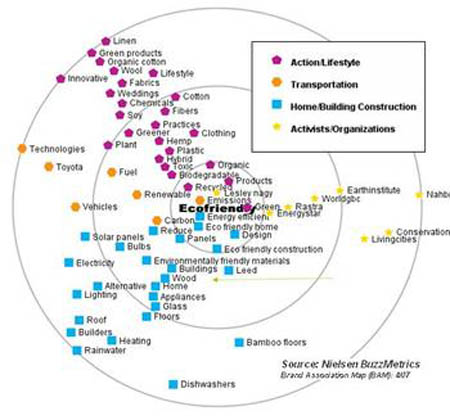 The Buzzmetrics map illustrates how Americans have finally embraced the idea that environmental ideas, for too long associated with saving the natural world, apply to their personal realm. Now that is old news to the ecologically aware among us who eat organic food, ride public transit, turn off the lights, mulch with decayed leaves, fertilize with horse manure, and vote for green candidates. But for most Americans it’s a pretty new concept. More than almost any piece of data I’ve encountered, the Buzzmetrics map shows that more Americans than ever get the connection between stabilizing natural conditions and their own well-being. When ordinary folk can track the term “eco-friendly” to bamboo floors, the Prius, hemp clothing, and living cities you know we’re getting somewhere. Of such linkages are organizing principles made. It’s why New York Times columnist Tom Friedman earlier this month called green the “new red, white, and blue.”

What’s not as clearly shown in the Buzzmetrics association map is where green values are growing their deepest roots. But there’s a hint in the connections between the “eco-friendly” at the map’s center, and the outer ring’s proximity to “living cities,” “conservation,” and “lifestyle.”  Nowhere is “highway,” “big-box,” “parking lot,” “congestion,” “traffic”, “subdivision,” or any other brand associated with suburbs mentioned.

In list after list of the cleanest, safest, most exciting, and best places to live and do business in the United States, American cities are showcased — Tulsa, Knoxville, Charlotte, Boston, Seattle, San Diego, Dallas, Portland, Chicago, Charleston. Suburbs are almost never mentioned, and for good reason. Suburbs represent a brief experiment in wasteful patterns of 20th century development that the 21st century has only begun to punish with falling real estate values, rising taxes and living costs, struggling schools, increasing violence, and deteriorating infrastructure. Funny. Those are the very same conditions that in the 20th century prompted people to flee cities.

It turns out that cities, with their parks and water fronts and transit lines and historic neighborhoods, existing infrastructure, and countless flat roofs that can be turned into urban gardens, are a lot easier to make greener and more energy efficient than suburbs. And now that downtowns are magnets for new housing, cities are also producing the human communities that young people, empty nesters, and couples without children say they can’t find as easily in the suburbs. The Buzzmetrics brand map shows that underlying the gathering mass movement in America back to cities is an intuitive understanding that cities now are cleaner, greener, and much more adaptable to the century’s new market conditions than the suburban places from which they came.

Talk of Tianjin Climate Conference: China and U.S. Are Electrifying The Car

One thought on “Brand Associations That Are Helping Cities, Hammering Suburbs”