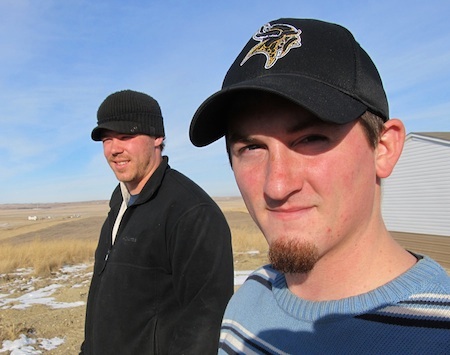 A lot is at stake here for the nation, for this region, and for the 45,000 people, most of them men who’ve come from every corner of America to find work. Last August Jon Moore and Rick Harding migrated over from their home town in Sandpoint, a small resort city in northern Idaho. They are both 26 years old, unmarried, and have partners back home with young children. They also are ambitious.

Within days of landing in Williston they secured good jobs paying $60,000 to manage nine freshwater pumping stations for tanker trucks hauling water to drilling sites. In January Moore and Harding plan to bring their families to the mobile homes they rent, perched side by side at the top of a big hill overlooking highway 1804 and the Red Mike Valley. In the distance, two drilling rigs are visible. (See pix at bottom). The valley is a target of energy companies. Mineral leases have been sold for $10,000 an acre. Moore and Harding, high school graduates with a few college credits, see opportunity to become executives and investors in the shale oil energy surge that began in 2006, really got rolling in 2008, and now is an economic cyclone that has engulfed western North Dakota and shows signs of turning south and west into South Dakota, Montana, Wyoming and Colorado.

“I think I’m here for awhile,” Moore told me earlier this month. (See him on left in pix above.) “Back home there was just nothing going on. We heard about North Dakota and came over to get jobs. It’s working out real well.”

There is good reason for the American left to be nervous about the oil and gas boom unfolding on the northern Great Plains, and in almost a dozen other states. The gas and oil industry has generated 600,000 new jobs in the United States since 2002, according to a new study by IHS Global Insight, a respected energy research group. North Dakota has produced 59,000 new jobs since 2005, according to the U.S. Census Bureau, at least 35,000 of them oilfield related. The state produces 500,000 barrels of oil a day worth $45 million at current market prices, and oil and gas production generates $4.5 million a day in state tax revenue, according to the state Oil and Gas Commission.

The all-too-brief contest from 2008 to 2010 between “drill baby drill” and clean energy is a rout. The oil and gas industry is spending $100 billion a year now in the U.S. and Canada to drill, process, and transport liquid fuels and natural gas from new energy fields. Nearly $20 billion annually is being spent in North Dakota alone to drill 2,000  wells a year, and undertake all of the related service and infrastructure development. There are two proposals for new refineries here. Enbridge, the Canadian transport company, is planning a $145 million expansion to its oil pipeline network here. Burlington Northern is building prairie depots to load oil aboard unit trains that transport 100,000 barrels a day to the Gulf Coast.

Last year, in contrast, the Pew Environmental Group reported that spending on clean energy technologies in the entire U.S. was $18.6 billion. Wind turbine and blade manufacturers are in trouble. Solar companies are closing. Federal interest in clean energy development subsidies is fading. America seems to be heading back to the future, clearly ready to embrace a profligate new era of petroleum and natural gas abundance while forsaking the innovation, jobs, and wealth that China already is developing in its clean energy sectors.

Moore and Harding understand the shifting economics of energy production. They worry about the damage to the landscape that comes with thousands of drill pads scraped from the prairie and miles of new roads and pipeline corridors. Migratory birds die in the toxic waste pits that accompany the drilling, an outcome that the US Fish and Wildlife Service is addressing with high profile prosecutions here. The state has counted over 1,000 oilfield related spills of fuel, oil, saltwater, and waste, five times higher than the number of spills in 2004. Traffic deaths this year are double what they were in 2010, and injuries are 40 percent higher than in 2010, according to the state police. A bad drilling pad explosion and fire in September killed two young workers and burned two others. Emergency medical and ambulance crews describe in published reports how picking up the pieces on the drill sites, highways, and man camps that have sprung up everywhere is like treating the wounded in a war zone.

Still, young men come because there are good jobs that pay very well in a growing sector that also has geopolitical consequence. “This is energy that we produce here,” said Harding. “We’re not sending dollars out of the country.”