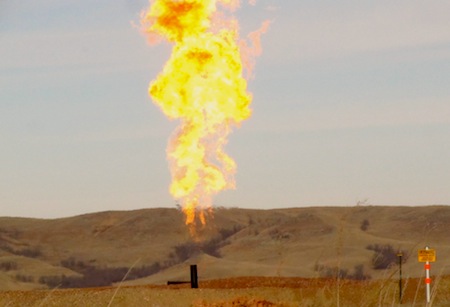 WILLISTON, ND — Past midnight at the station platform in Spokane, 850 miles east of this riotous Great Plains city riding the lashing tail of an oil drilling dragon, the roustabouts and heavy equipment operators kiss wives and girlfriends, then reluctantly board Amtrak’s Empire Builder. Twenty-one day shifts, 14 hours a day, in wind-whipped cold and in a perilous work zone that can maim or kill has a way of quelling enthusiasm — even when wages are high enough to put most men in six figures. Truck drivers start at $85,000.

Seventeen hours later they descend into a much bigger crowd at the Williston train station. Men coming. Men going. Big pickups rumble in the driveway. The sound of Williston is diesel engines. The scent is diesel fuel. It is below zero, windless for a change, and exhaust vapors hang in the air. The swirl of men, talking loud and walking fast to warmed pickup cabs, is like a swift eddy in a strong stream. The currents of purpose and planning, assignments and destinations, are so keen it feels like a military campaign, though there are no tanks and no bullets.

Last year, as a senior editor of Circle of Blue and a contributor to Yale Environment 360, I prepared some of the first dispatches about the scale and speed of the oil and natural gas production boom occurring at the center of the continent. Earlier this month, I spent two weeks in Idaho, Washington State, and North Dakota on assignment for OnEarth and Circle of Blue to gauge the magnitude of what is very clearly the leading edge of a national fossil fuel production boom that is rewriting what we thought we knew about hydrocarbon reserves in the United States.

In 2012, both publications will roll out the findings from this trip. But very briefly here is some of what I saw:

1. By itself, the Bakken formation, a deep shale layer beneath North Dakota, Montana, and Saskatchewan, now is said by state and industry geologists to contain 22 billion barrels of recoverable oil. That is five times more oil than the U.S. Geological Survey estimated a few years ago. State geologists say the entire formation holds 168 billion barrels of oil, and industry engineers say that the development of production technology is proceeding so steadily that perhaps half of the reserve is conceivably recoverable. 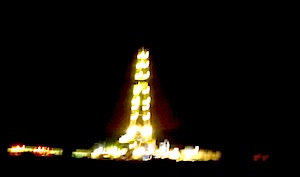 2. North Dakota will produce roughly 500,000 barrels a day by year end and will succeed California early next year as the country’s number 3 producer. The state seems likely to reach 1 million barrels a day by 2013, according to state geologists, putting it behind Texas as the number two producer. At that level, there appears to be easily enough oil in the Bakken to keep wells producing for 100 years.

3. Two other shale formations, the Three Forks and the Tyler, lie below and above the Bakken and extend into South Dakota, southeast Montana, and Wyoming. Each appears to hold billions more barrels of recoverable oil.

4. This year, 2,000 oil wells will be drilled in North Dakota’s Bakken oil field, which occurs across the state’s rolling northwest prairie. Each costs an average of $7 million to drill and complete. The success rate in recovering large quantities of oil is more than 99 percent. The average well yields 1,200 to 1,500 barrels a day for the first three months and then gradually drops to 250 to 500 barrels a day, and may yield at that rate for decades. At $90 a barrel, that’s $25 million in total revenue in the first year, and $13 million annually per well afterwards. Such numbers account for the frantic pace of drilling, which occurs 24/7.

At night, the 200 drilling rigs operating around Williston are lit as bright as carnival rides, white towers of floodlight groaning ceaselessly against the black. By day, the orange flames of gas flares superheat the air at completed production sites. (See pix above).

5. North Dakota’s Bakken is just one of a half-dozen gargantuan oil and gas drilling fields opened or vastly expanded in the U.S. and Canada in the last decade by American and global energy corporations. The U.S. Gulf, the scene last year of the nation’s worst oil spill, is producing 1.6 million barrels of oil a day, and billions of cubic feet of natural gas. Pennsylvania, New  York, and Ohio have deep shale natural gas plays, and Ohio has the Utica shale, which may yield billions of barrels of oil, according to industry petroleum engineers. Texas has two big shale gas plays. Kansas, Colorado, Utah, California, South Dakota, and Wyoming all are the focus of intense mineral leasing and production activity. And the tar sands region in Alberta, Canada is producing 1.5 million barrels of oil a day, of which 1.1 million barrels daily is transported to the U.S.

I’ll have more to report in the coming days. Very quickly, though, there’s a lot to consider here, not the least of which are these thoughts. Is the idea of peak oil off the table for the next generation? Maybe. Is the production surge, which has pushed U.S. oil production to the highest levels since the 1970s, a reprieve for the country? Probably. But is it also a capitulation to the future? Almost certainly. 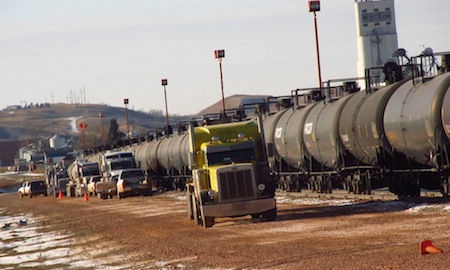 5 thoughts on “In North Dakota’s Bakken Oil Field, The Smell of Diesel, the Sound of Trucks”