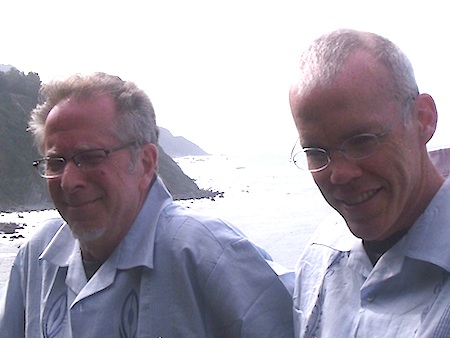 My friend and colleague Bill McKibben this week joined 10 other prominent climate activists in calling for civil activism in front of the White House in August. I learned of the planned event, to protest the $7 billion Keystone XL tar sands oil pipeline from Canada to the Gulf Coast, from a young friend here in northern Michigan who is attending Middlebury College in Vermont, where Bill is a resident scholar. She’s also planning to join the protest.

Bill’s rules of engagement for the campaign are like a short list of his own personal strengths of character and courage. He suggests participants ought to dress appropriately, behave reasonably, and be prepared to engage in “civil disobedience that will likely get you arrested.” (That’s Bill at right in pix above with colleague Christopher Shaw during a Middlebury environmental journalism workshop for young writers in the spring of 2010).

It’s fascinating to watch a writer of Bill’s talent and influence steadily evolve as an activist on climate change who is 1) globally celebrated by public interest organizations and a number of developing-nation governments around the world, and 2) raising louder and louder alarm bells in the corporate offices of the fossil fuel industry and the high government councils they fund.

Bill co-founded and directs 350.org, which organizes online and has produced the largest global citizen actions ever about climate risks. In December 2009, during the international summit on climate change in Copenhagen, Bill was among the most sought after speakers and most recognizable NGO leaders. Last year, before the election, he led the widely publicized campaign to convince the White House to reinstall the solar panels that President Carter put on the roof of the White House in 1979 and President Reagan dismantled in the early 1980s. President Obama agreed to hook up a White House solar power system, but the equipment hasn’t yet reached the White House roof.

Make no mistake about the enormity of what Bill and his fellow activists confront in their challenge to the Keystone XL pipeline. Keystone is viewed by its proponents, including Secretary of State Hillary Clinton, as vital to securing adequate supplies of energy in the U.S. A very solid background on Keystone, tar sands development, shale oil and shale gas is on Circle of Blue. I’m heading in late July to east Texas to report for OnEarth on civic unrest east of Dallas, where citizens are concerned that oil leaks from the Keystone project are a risk to their water supplies.

Over the weekend on Modeshift I described, with links, the huge fossil fuel infrastructure that is being built alongside the Keystone XL — the $22.6 billion that the energy industry is spending to expand and modernize refineries in the center of the country, and the $30 billion that is being spent to build a new pipeline network to transport tar sands oil, and deep shale oil and gas.

Bill McKibben is tackling the most significant and riskiest confrontation over resources and the economy in our lifetimes. He’s trying to head off a calamity. An article last week that completed Circle of Blue’s year-long Choke Point project on energy and water describes some of the dimensions. Energy developers are pursuing ever harder and more dangerous reserves of oil, gas, and coal, and driving up energy prices. They’re making a fortune while also producing  a new magnitude of environmental damage. Energy companies feel justified because they see themselves holding off energy shortages that would cripple the economies of the U.S. and China.

But it’s a gambit, that unless dramatically alterred, has an unmistakable climate and economic conclusion. Bill McKibben and most of the world’s scientists say our unreasoned search for fossil energy is wrecking the planet’s capacity to regulate global temperatures. And I quote David Fridley, an energy supply expert from Lawrence Berkeley National Laboratory, who says we’re spending at peak levels for energy in the U.S. now, and a deeper recession is fast approaching. Energy prices are heading steadily higher, not necessarily because of short supplies, but also because it is getting so much harder and more expensive to mine, drill, process, transport, and supply markets.