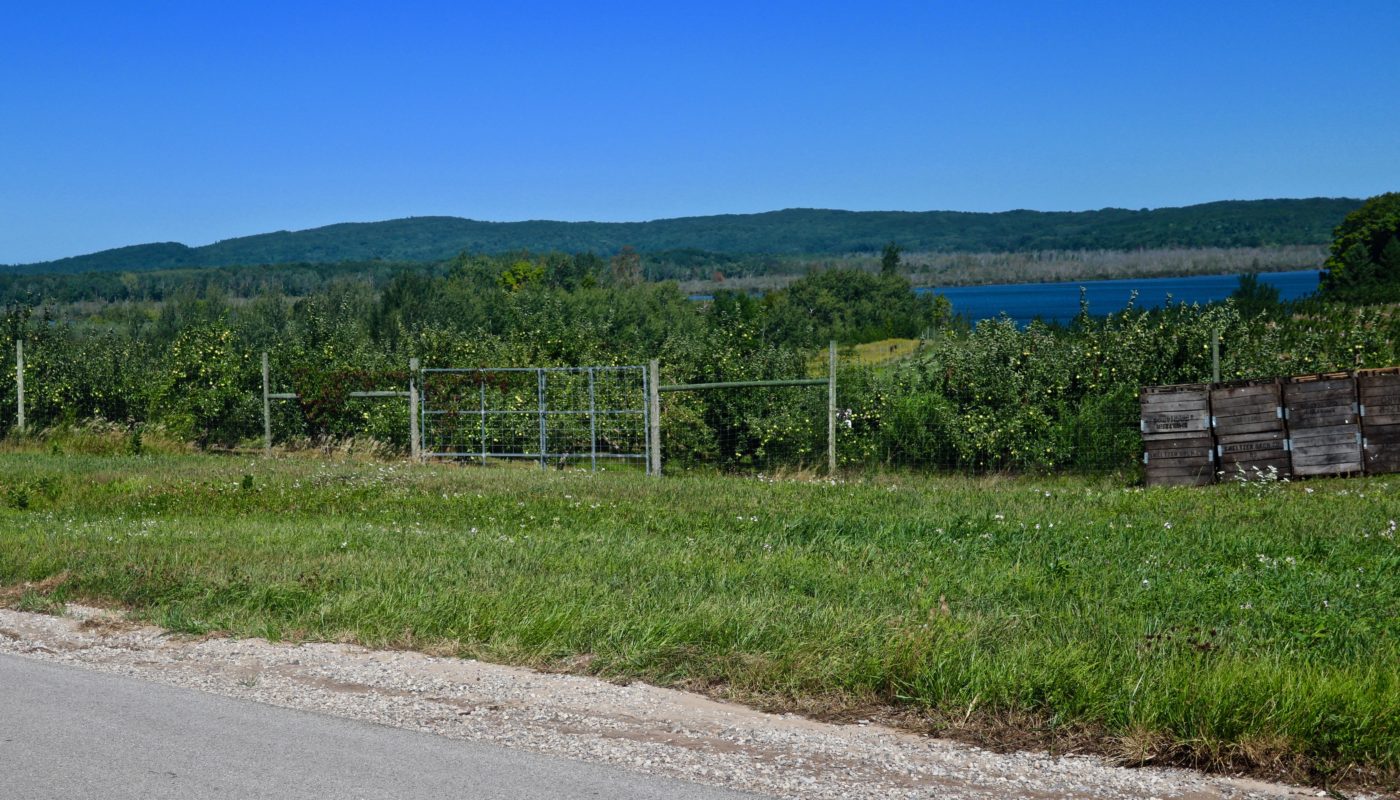 In Benzie County, there are 180 miles of primary roads—those with the signature signs that designate route numbers, like County Road 669. There are 138 additional miles of paved local roads, which are the two-lane thoroughfares outside the county’s seven towns that wind by lakes, over hills, past orchards, and through forests.

It is easy to describe nearly every mile of these roads as scenic. They also are the county’s signature public asset.

Aside from infants, it is likely that every one of Benzie’s 17,500 year-round residents has a favorite stretch of road. The incomparable convergence of Lake Michigan, blue sky, and green forest on M-22 heading down Stratton Hill, south of Elberta, near Green Point Dunes. The path north on Indian Hill Road outside Honor, where the road climbs to the summit of a ridge and provides exhilarating views of active farm fields. Joyfield Road, along the county’s southern boundary, at all times of the year but especially in May, when cherry orchards are a miles-long bouquet of white blossoms.

It might seem odd, unconventional, even anachronistic to write about Benzie’s roads in this era of dismay about disease, tumult about our country’s condition, and all the apparent cultural and political divisions.

Roads, though, are a reassuring balm to those fractures. Everybody needs them. Everybody uses them. We cannot function without them. Most significantly, roads illustrate what it means to collaborate and make investments that bridge the great divide in our principles and values—roads serve individuals, the focus of conservative politics; they serve the broader community, a liberal ideal.

A Tax Increase Supported For The Public Good
Since the first decades of the 20th century, when Benzie County’s three major highways—M-115, M-22, US-31—were built and paved, our local roads have emboldened the ideal that citizens, through their governments, can act together to support the economy, communities, and the quality of life.

Think that is strange? It is not. For a decade, residents of Benzie County have consistently championed that ideal and expressed it in property tax increases to improve their roads. And from one end of the county to the other, evidence of their wisdom is plain. Benzie County’s roads, always beautiful, are becoming smoother and safer.

My favorite is Herring Road in Blaine Township, in the county’s southeast corner. It climbs from Gorivan Road, past a cornfield and an orchard, then heads west and downhill, where it reveals the near total blue expanse of Upper Herring Lake and the green ridge beyond. Winter, summer, spring, and fall, the arrangement of nature and agriculture, with homes placed here and there as manmade flourishes, two-mile long Herring Road is the scenic embodiment of this beautiful place where we live.

For two decades, Herring Road was a mess of pitted asphalt. No longer. These days, it is uncracked, unmarred—an even, almost silken path. Four years ago, the Benzie County Road Commission spent $123,000 to replace its ruts, holes, and failing surface with new asphalt. In years since, the Commission has also repaved all of the local roads that lead to Herring Road: Bovard, Mick, and Raymond.

Perhaps I notice these things more than most county residents. For one, I am into infrastructure. Years ago, I was the infrastructure columnist for a fancy monthly business magazine in New York City. In the decades since, I have reported from six continents about almost every piece of industrial equipment that contemporary society needs to operate—rails, dams, transmission lines, power plants, refineries, chemical plants, mines, factories, mills, oil and gas fields, wind and solar farms, data centers, irrigation networks, ports, buildings, bridges. And roads.

The second and more important reason that I am interested in roads is that I am an active member of Benzie County’s growing community of road bicyclers. And in that sport, one takes account of the condition of the roads. I can report from the front lines that, in Benzie County, roads are getting steadily better.

A convergence of civic frustration, unlikely politics, and smart public investment produced this change. In a county where the call for “no new taxes” helped to elect a string of conservative lawmakers to posts in Lansing and Washington, it turns out that one new tax is popular. In 2010, Gilmore Township voters approved a property tax increase for road improvements. Three years later, county residents did the same thing. Crystal Lake and Inland townships also passed referendums to increase property taxes to take care of their roads in 2015 and 2020, respectively. All passed with healthy margins, and renewals of the millage proposals have also been popular.

12 Miles of Resurfacing Annually in A Small County
Between 2014 and 2019, an average of just over $1 million annually has been invested in the county’s local and primary roads via millages, according to county and township records. The biggest share was spent by the County Road Commission, which worked on 71 miles of roads, or nearly 12 miles annually. Most were repaved. Starting next year, the county and township millage funds will provide more than $1.2 million annually. And if the price of asphalt moderates, paving will increase.

In a small county—the smallest in the state, by land area—that much annual road repair makes a very big and visible difference. Especially to a road biker.

Wallaker Road—which cuts a north-south path between M-115 and County Line Road east of US-31—was a three-mile-long nightmare for years. Choppy. Cut up. Ripped with holes and fractures. In two phases in 2018 and 2019, it was repaved for $212,000. Now, it is beautiful to ride.

Same for Narrow Gauge Road, which runs out of Beulah and trends uphill for three miles to Marshall Road. Narrow Gauge was repaved in three phases from 2014 to 2017 at a cost of $307,000. Marshall was rebuilt, too—now, it is a superfast glide down to US-31.

The county and townships are not the only governments focused on road repair. Frankfort voters in August approved a property tax increase for roads that will reshape city streets. The showcase project, says city superintendent Josh Mills, is a $2 million joint city-state project to replace water mains, add design flourishes in lighting and landscaping, and reconstruct the M-115 gateway from Lake Street—the portion of M-22 that comes in from Elberta—to the M-22 blinking light at the corner of 7th Street. Millage revenue will pay $1.2 million of the cost.

The gateway is one of the signature new elements in infrastructure over the past decade that has put Frankfort on the short list of Michigan’s loveliest Great Lakes communities.

“Benzie County is an amazing community,” Mills says. “The cooperative synergy amongst municipalities and other governmental agencies has never been better.”

Clearly, there is more that needs attention.  Crystal Drive, along the beautiful north shore of Crystal Lake, needs a complete re-do on its eastern end. Swamp Road in the southern part of the county is a mess. Demerly Road also needs work to the west of US-31. But Crawford Road, which connects Swamp and Demerly, was resurfaced this year. Matt Skeels, Road Commission manager, told me that Swamp and Demerly are on the priority list for resurfacing.

Along with the local and primary roads, the county’s major trunklines also are receiving considerable attention from the state. At a cost of $6.5 million, M-115 between Benzonia and Frankfort was rebuilt four years ago. This summer, eight miles of M-115, from the county line to the blinking light on US-31, was repaved at a cost of $1.7 million. And the county’s biggest and most disruptive road project this year is the $5.5-million, 1.7-mile reconstruction of US-31 in Benzonia.

The latter two projects are, in large part, the result of a transportation funding policy change in Lansing. Following the Legislature’s rejection of a 45-cents-per-gallon increase in the gas tax in 2019, Governor Gretchen Whitmer (D) earlier this year convinced the state to float a $3.5 billion bond. The bond is a call to arms to achieve her 2018 campaign promise to “fix the damn roads.”

It has had immediate effect. The state’s annual budget for repairing and rebuilding highways, roads, and bridges increased to $1.154 billion annually, according to state figures—that is 42 percent more than the $809 million spent on roads and highways in 2019.

If you have been road biking as long as I have in Benzie County, it is easy to visualize your rides. I know the mileage of almost every paved road and can easily count the number of hills. For instance, the ride from my house in Benzonia to the corner of M-22 and Fowler Road south of Empire, returning on M-22 and the north shore of Crystal Lake, is 28 miles and includes four hills.

Now, visualize entering Benzie County in October this year, when the leaves are in blazing colors and the Benzonia US-31 project is finished. Start at Crystal Mountain, and ride through Benzie County’s fall glory on smooth roads all the way to Frankfort, which next year will build an entrance that is fit for a terrific town.

It is amazing what can be achieved when community members reach agreement and work together to make it happen. Smart investments for useful public purposes. A great place to live and to ride.

This article was initially published in Labor Day edition of The Betsie Current, a fine seasonal local newspaper published by my friends Aubrey Parker and Jordan Bates.