Seven weeks to the election. The choice for the country is ever more clear. Will Donald Trump’s dishonesty, malice, and incompetence become the reigning constructs of American governance? Or will the country trust Joe Biden to manage crises, restore order, and respond effectively to the century’s rapidly evolving ecological, social, and economic conditions?

The 2020 election is a test of the character of our country. The winner, as I’ve said for weeks, is obvious.  Americans will not re-elect a president who not only is incapable of doing the job, his reckless decisions have killed hundreds of thousands and put millions of Americans in physical and economic danger. More significantly, Democrats have nominated a strong, experienced, attractive ticket to take command.

Joe Biden and Kamala Harris are executing a masterful and winning campaign. Their advisors are putting the candidates in swing states that need to hear from them. Their speech writing teams are gradually heating up the rhetoric. Yesterday Biden called the president a “climate arsonist” and accused Trump of putting the suburbs in danger of climate-related catastrophes: wildfires, floods and hurricanes.

Both Biden and Harris are clear and cogent in their public statements, expert in the issues, and surefooted in their critiques of the president. Biden is putting to rest the needless concerns about his age and energy. He’s delivering strong speeches and looks prepared for the historical moment that confronts the country. He is plainly ready to dispatch Trump during the debates. He may even embarrass the president so thoroughly that Trump could walk off the debate stage, as he does when faced with a tough question during White House news conferences.

Second, Trump and his campaign are floundering. A powerful convergence of nature and economics has swamped the president in a cloudburst of villainy and blame. Covid-19 deaths are nearing 200,000 and climbing. The West is epically on fire. Iowa was wrecked by a windstorm. The Great Lakes are at record high water levels, causing widespread erosion. Hurricanes are battering the South.

Conditions are equally grim for workers and businesses. Unemployment remains stubbornly elevated. The economy is in a tailspin. U.S. airlines, which already laid off 130,000 pilots, flight attendants, ground crew staff, and managers, are getting ready on October 1 to throw 100,000 more employees off their payrolls.

Third, political news is walloping Trump in the campaign’s last weeks. In the length of just seven days this month, his aides accused Trump of calling soldiers killed in action “losers.” Then Trump himself confirmed in a taped interview what we all knew. Early on, but certainly by the first week of February, he was briefed on the central facts about Covid-19. The virus was contagious, spread in the air, and lethal. Trump dismissed the danger, he said, to prevent panic.

Trump’s disdain for the perils of Covid-19 also tests the immune systems of his supporters, who are turning up by the thousands at cult rallies now being held indoors. How crazy is that? How irresponsible. How Trumpian. And how damaging politically.

Last, let’s talk about public polling. The credibility of polling is suspect for the time being given the 2016 election. But here’s a poll you haven’t heard much about. In August, a Fox News poll found support for Biden among evangelicals at 28 percent, significantly higher than the 16 percent who supported Hilary Clinton in 2016. Here’s another. Polling shows Trump is much closer to losing Texas — he’s ahead by 1 to 2 percent — than he is to winning Minnesota or Wisconsin. Trump is more than 5 percent behind in both states. And here’s a third result: according to aggregated polling on RealClearPolitics.com and 538.com, Biden’s lead is 7.5 percent nationally, about the same margin that has persisted for months.

So let’s sum up. Democrats have a strong, smart, likeable ticket that is campaigning effectively. The president is a mess. His campaign is floundering. The country is in the worst condition of our lives. National and state polls reflect the electorate’s preferences. Biden is ahead nationally. And he’s ahead in many swing states. Races in traditionally Republican-leaning states Trump has to win – Texas, Florida, and North Carolina – are tossups at this stage.

Here’s my guidance for being confident about the election results, and calm about the campaign for the next seven weeks. The media, including my own New York Times and my favorite go-to news organizations — Washington Post, New Yorker, Politico, The Atlantic, and the Drudge Report — will fill their reports with demoralizing, bizarre, disorienting, and factually vacant “what if” stories projecting all manner of election-related mayhem. Violence before and after November 3. Voter suppression. Post Office mismanagement. Tightening state races. Trump refusing to leave the White House. A Trump comeback.

Forget about it. Disregard the factless scenarios. The facts, as I’ve outlined above, point to a resounding Biden/Harris election victory. Our responsibility is to be confident and supportive. To vote. And to get everyone else to vote.

We’ve been faced with crises of equal magnitude and hazard in every century since our founding.  November 3 is the moment America confirms its principles and values as a sane, responsible nation.  We will sweep away the hate and lies. In electing Joe Biden and Kamala Harris, we will display our intelligence, creativity, and unity.  Those core elements of our 21stcentury national character are essential for solving the ecological, economic, and racial justice challenges of this century. 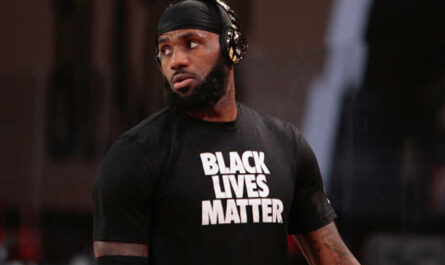 Thank You LeBron James For The Best of 2020