Last week the Apollo Alliance and the BlueGreen Alliance,  two of the most important national non-profits supporting clean energy development and good jobs, announced that as of July 1 they would merge. The much larger Minneapolis-based BlueGreen Alliance, a five-year-old collaboration of big green groups and unions, will become the parent of San Francisco-based Apollo, which was founded in 2003 and gained its renown for being the first organization to understand that the transition to an economy primarily fueled by something other than oil and coal could produce a flurry of useful  results — jobs, climate action, energy security, and industrial innovation.

The merger is good for both organizations. It consolidates Apollo’s strong policy work with its parent’s considerable networking strength in states and in Washington, D.C. It also reflects the need for one big progressive voice touting the benefits of clean energy in an era, hopefully temporary, in which national interest and public investment in solar, wind, geothermal, and other renewable and non-fossil alternatives is in treacherous decline.

That’s because the right — heavily financed by big oil, gas, coal, and utilities — loathes what it calls government intrusion in the market, and sees no justification for curbing carbon emissions because it is convinced climate change is a scientific hoax. At the grassroots, it’s no better. Civic coalitions that defy conventional description — joining left, right, and centrist activists —  have formed hundreds of campaigns in more than 35 states that are devoted to killing renewable energy projects they regard as just too damn big.

China, meanwhile, has no such problem. By the end of the decade, China will produce over 700 gigawatts of electricity from wind, hydro, nuclear, and solar. If that kind of development occurred in the U.S. it would amount to roughly 65 percent to 70 percent of our projected electrical generating capacity in 2020. Hundreds of thousands of jobs have developed in China’s clean energy and non-fossil fuel sectors.

Meanwhile the United States is busier than it’s been in decades perpetuating the domestic fossil fuel economy. Big oil last year spent $100 billion accelerating a hydrocarbon boom at the center of the continent. Canadian tar sands have become the largest single source of oil imports to America. An extensive new oil and gas transport and processing infrastructure is under construction from Alberta, Canada through the Great Plains, Rocky Mountain West, Great Lakes states and on to the Gulf Coast. It includes new pipelines, as well as modernized and expanded refineries. Hundreds of the nation’s heavy onshore drill rigs are tapping oil and natural gas in the northern Great Plains in shale formations nearly two miles deep. North Dakota looks to be on the way to supplanting Texas as the number one oil producer among the states.

I know a little bit more about the Blue Green-Apollo merger than your average bear because I worked at Apollo for 16 months in 2008 and 2009,  as communications director, when the “clean energy, good jobs” message attained a rare salience in policy circles and electoral politics. The email message announcing the merger, sent on Thursday by Apollo Chairman Phil Angelides, reminded me of those heady days and especially one morning meeting in Denver that synthesized the movement’s influence at the time.

It was the second day of the Democratic National Convention and a select group of America’s senior labor and environmental leaders met for an hour with T. Boone Pickens, the Texas oil billionaire who’d announced a month earlier his interest in investing a good portion of his fortune in wind power. I attended the meeting for the Apollo Alliance and documented some of the participants in the picture above — (right to left) Rich Trumka, now president of the AFL-CIO, Leo Gerard, head of the United Steelworkers, Carl Pope, then the executive director of the Sierra Club, and Bracken Hendricks of the Center For American Progress. And in the picture on the right of T. Boone Pickens. 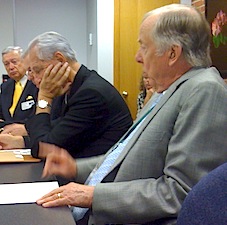 When T. Boone Pickens articulates much the same thing as the leader of the Sierra Club, never mind a major party presidential nominee, that’s a conversation you don’t forget. Quite a few of the people who’d helped tee up the United States for what looked to be a momentous transition were gathered at that table. Bracken Hendricks, an author and capable strategist, was the founding executive director of the Apollo Alliance. Carl Pope and Leo Gerard were Apollo board members and in 2006 founded the BlueGreen Alliance, a joining of the Sierra Club and the Steelworkers. Rich Trumka, who once headed the United Mineworkers Union, was talking jobs in the same breath he mentioned wind and solar energy.

Emily Dickinson once called hope “the thing with feathers that perches in the soul.” In 2008 and 2009, clean energy looked to be an idea set to soar. Barack Obama campaigned on “clean energy, good jobs” message and won the nomination and presidency. Congress passed a $787 billion stimulus bill in February 2009 that contained $100 billion or so for renewable energy, energy efficiency, transit, and other clean energy initiatives. The House, in June 2009, beat back a fierce assault from the fossil fuel industry and passed a comprehensive energy bill that was the first time a chamber of Congress set mandatory limits on greenhouse gas emissions. Clean energy and climate action were prominent ideas in global economic and diplomatic meetings, including the Pittsburgh G-20 conference in September 2009, and the U.N. climate summit in Copenhagen in December 2009.

In the 18 months since the Copenhagen climate summit, the clean energy and climate action messages have been in eclipse. Foundations and advocacy organizations are searching for new tools to revive the public’s interest. Jeff Nesbit, the former director of the Office of Legislative and Public Affairs at the National Science Foundation, just accepted the executive director’s post at Climate Nexus, a New York-based climate and clean energy communications group formed by a consortium of big philanthropies. The newly merged Blue Green Alliance has a big job ahead of it, too. We wish them well.

The Sun, the Wind, and the Promise of Ohio’s Clean Energy Development

2 thoughts on “Blue Green Alliance and Apollo Alliance To Merge”