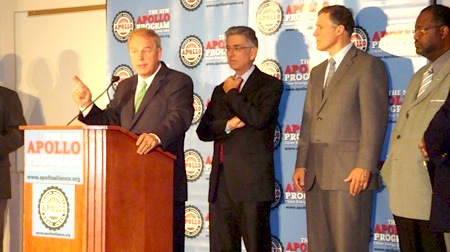 Tuesday’s election wasn’t a complete rejection of climate action and the promise of the low-carbon economy. Indeed, in the decisive defeat of California’s Proposition 23 and the re-election of Senator Barbara Boxer, both ideas have salience in the nation’s largest state. Nevada Senator Harry Reid was re-elected and his party retained control of the Senate with several races still undecided.

In deciding to outspend the oil industry by a three-to-one margin, investors and executives in California’s clean energy and clean-tech companies succeeded in defeating Prop 23, which would have suspended California’s four-year-old climate action law, and hurt the state’s expanding market for clean energy and energy efficiency tools and practices. Now that the battle is won, California will continue to attract billions of dollars in research and start-up funding and retain its stature as one of the world’s principle centers of clean energy innovation.

Moreover, along with Democratic Senator Boxer’s victory, which appears to ensure she retains the chairmanship of the Senate Environment and Public Works Committee, another climate advocate, Democratic Attorney General Jerry Brown, was elected governor.

Big Message: Dissatisfaction
The unmistakable outcome of the mid-term election, though, was frustration about the economy. What’s not as clear, said many climate and environmental advocates, was how much of a dark shadow that cast on climate action politics and clean energy development. “There was no mandate on turning back the clock on environmental protection. Polls galore show continued and strong public support for making continued progress to protect our health and boost our economy,” said Heather Taylor-Miesle, director of the Natural Resources Defense Council Action Fund. “Americans want us to unleash our ingenuity to develop clean-energy alternatives while combating climate change.”

There is no doubt, though, that achieving those goals got harder. Republicans, too many of them campaigning on messages that denied the scientific authenticity of climate change, and raising doubts about the cost of moving away from fossil fuels, swept House races, gaining 60 seats. Republican in the next Congress will have a 239-196 majority.

Politico reported this morning that at least 30 Democratic House members who voted for the 2009 House cap and trade bill were defeated. The White House, though, asserted that many of those races involved freshman Democratic lawmakers who’d won in 2008 in traditionally Republican districts.

Republican candidates in every region also criticized the $100 billion in clean energy, efficiency, and rail investments in the 2009 stimulus as an ill-advised government gambit to “pick winners and losers.” Voter tallies in every region except California clearly indicated that message also resonated. Virginia Democratic Representative Rick Boucher, a ranking member running for his 15th term, lost to Republican Morgan Griffith, who persistently raised” the stimulus and Rep Boucher’s cap and trade vote as a threat to the state’s coal mining industry.

Florida Republican Charlie Crist, who as governor encouraged solar and the alternative energy development as a safeguard to climate change, was soundly beaten in the Senate race by Tea Party candidate Marco Rubio, a clean energy opponent who denies industrialization is warming the planet. Minnesota Democratic Representative James Oberstar, an 18-term lawmaker, a premier public transit and rail advocate, and chairman of the House Transportation and Infrastructure Committee was beaten by a Tea Party candidate, Chip Cravaack.

And in Ohio, Democratic Governor Ted Strickland (speaking in pix above from a 2009 Apollo Alliance news conference), who led his state through a grueling effort to approve one of the nation’s best renewable energy standards and prompted billions in new manufacturing sector development in wind and solar markets, was defeated by former Republican Representative John Kasich. Kasich vowed during the campaign to roll back the renewable standard.

As I’ve noted, next year will be tough for climate action in Congress and the states. There may be some relief in knowing that a few House climate bill supporters won close races, including Democrats Brad Miller of North Carolina and and John Yarmuth of Kentucky.

“Speaking of the lion’s den – he did this in the heart of Kentucky, a leading coal producer,” said Jeremy Symons, senior vice president for conservation and education at the National Wildlife Federation.