“The stuff that matters, especially when it comes to the environment, is not the big flashy stuff,” explained Keith Bartholomew, a lawyer who teaches planning at the University of Utah in Salt Lake City. “It’s the small actions. Environmental damage is an accumulation of 1,000 cuts. So repairing it means applying 1,000 Band-Aids. Each one is important. It’s the many small Band-Aids that matter. Real relevance is the cumulative effect.”

I interviewed Keith last week for an article on how metropolitan regions have become the new incubators of effective environmental policy and programs. We hadn’t seen each other in 10 years, ever since he accepted our invitation to come to northwest Michigan to help the tiny, two-year-old Michigan Land Use Institute think through a particularly troublesome problem. The Grand Traverse County Road Commission, the business community, and several townships were desperate to build a new highway and bridge across the Boardman River south of Traverse City. We were convinced that was a terrible idea. The road and bridge was a waste of money, would make traffic worse, encourage more sprawl, and wreck a spectacular river valley so wild bald eagles nested there. 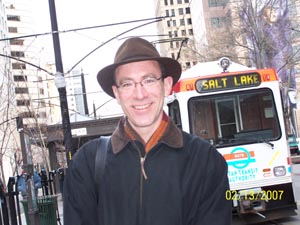 Keith knew a couple of things that made sense. As a young lawyer at 1000 Friends of Oregon in Portland, the granddaddy of non-profit American land policy organizations, Keith developed the legal and advocacy strategy that killed a $1 billion freeway proposed for Portland’s west side. In doing so, Keith helped to open a political, cultural, and economic space large enough for Portland to consider alternatives, including the regional light rail system that eventually was built. His story is an exceptional example of how clear thinking and a lot of moxie can produce a truly great outcome. Portland’s reputation as one of the outstanding cities in America has a lot to do with how its regional rapid transit system encourages more energy-efficient, environmentally-sensitive, neighborhood enhancing patterns of development.

The lesson we learned from Keith in 1997 was simple. In order to beat the Boardman bridge we needed to develop a credible alternative. A decade later, the bridge is dead and the alternative is gradually taking shape in the form of a $1.36 million regional land use and transportation project paid for with federal funds. Keith hadn’t heard the whole story so I spent a few minutes relating all that’s gone on in my home region since his visit, which occurred during an October 1997 week so warm and sunny that we convinced Keith to join us for a quick and chilly dip in Crystal Lake here in Benzie County. Now Keith can claim two places in America where his good ideas made things better.

Keith isn’t as involved in municipal affairs in Salt Lake City as he was in Portland, though he recently joined the governing board of the Utah Transit Authority, the agency that is building the second largest regional rapid transit system in the West. By the time it’s completed in 2015, Salt Lake City and its suburbs will add 24 miles to the 19 miles of light rail line that are already operating, and roughly 100 miles of commuter rail. Only Denver, which is building a 172-mile system, will have more. And just as in Portland, the economy supported by the UTA trains is booming.

Keith is 46 now, the married father of a handsome young boy, and a scholar in law and planning anxious to prove himself worthy of achieving a tenured faculty position. He’s tall, slim, funny, and still loves trains. “In order to create a quality place it has to have iconic features that attract people,” he told me. “It’s hard to beat a train. Trains promote centrality, vitality, and sustainability. That’s what they represent. They make cities work better. If they’re built in the right place trains will do what they’re good at — providing efficient access to localized geography.”

2 thoughts on “Why Details Matter”