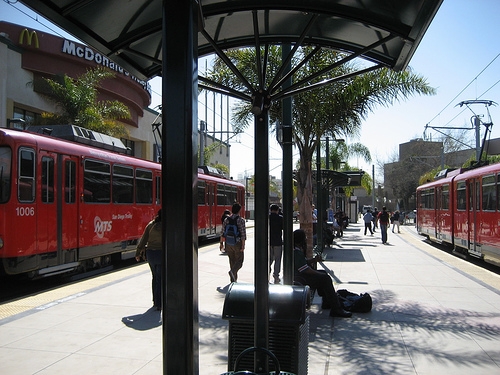 According to real estate listing services, there are nearly 41,000 homes for sale in Detroit and its three neighboring counties — Wayne, Oakland and Macomb. That’s more than twice as many homes on the market as in 2004, when the housing slump started in southeast Michigan. Moreover, it takes an average of six months to sell a house in metropolitan Detroit, and prices have slipped 15 percent to 3o percent, depending on where the home is located. Realtors I spoke to last week said that the Detroit market is still nine months away from reaching bottom.

Similar woeful trends exist in other troubled metropolitan housing markets in Arizona, California, Nevada, New Jersey, Georgia, and Florida. But Philip Langdon and Robert Steuteville report in the current issue of New Urban News that even in these tough market times homes located close to rapid transit lines, and homes built in new walkable neighborhoods are holding their value and still selling well.

Langdon and Steuteville cite statistics from the Washington metropolitan region, which is served by the Metro rail system. “In close-in, high-density Arlington, Virginia, which is served by Metro rail, prices in mid-2007 were up 20 percent from a year earlier,” and home prices in Washington itself were up five percent, “whereas most other jurisdictions in the region slipped.”

Dallas also saw a similar trend with home sales in new traditional neighborhoods. “Bill Gietema of Arcadia Realty Company in Dallas-Fort Worth said his firm’s two active TNDs “are outperforming their submarkets” (competing subdivisions in the same trade areas).” they report. “One of the TNDs, HomeTown, in North Richland Hills, is selling at “about a 10 percent slower velocity” than before the downturn, Gietema said, but in light of the overall market, that’s considered a healthy performance. “Competitors have closed down their models,” he noted. “We’ve stolen everybody else’s share.” The other TND, Capella Park, on the south side of Dallas, is “outselling competing neighborhoods five to one,” Gietema said.”

Not all new urban neighborhoods are faring so well, report Langdon and Steuteville. But enough are to make the point that buyers, especially young professionals and baby boomers are seeking something much different than a new home on a large lot distant from the city. The New Urban News report is consistent with what I’ve found in the last year during visits to Seattle, Portland, Knoxville, Chicago, New York, Washington, and Salt Lake City to write about metropolitan economies and real estate for The New York Times. In each of these metropolitan regions the downtown market for new and existing homes is stronger than the market for new and existing homes in surrounding suburbs. And the market is strongest in neighborhoods closest to rail transit stops.

Michigan is at a distinct disadvantage in taking command of this trend. The state does not have a single metropolitan rapid transit system, though Grand Rapids is edging closer to building either a light rail or a bus rapid transit line. Every housing market in the state is taking a pounding with the exception of the market along the Lake Michigan coast close to Chicago. Sales of vacation condos and single family homes have been stronger in and around New Buffalo than anywhere else in Michigan or the Great Lakes region, according to regional realty statistics.

One thought on “What Is Selling? Homes Close To Transit”