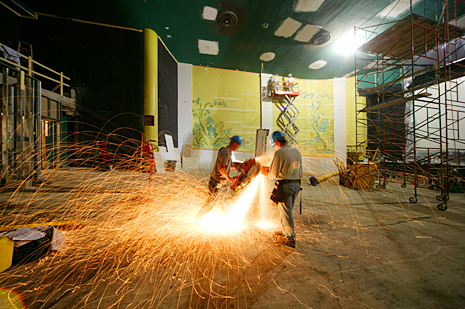 On Monday night Michael Moore, the Academy Award-winning director, best selling author, and one of the nation’s most vociferous detractors of the Iraq War and the Bush White House, was in the newly renovated lobby of the State Theatre in downtown Traverse City complaining about the lights. “It’s all wrong,” he said, pointing to the ceiling where fluorescent lights shined brightly from fixtures where he wanted dimmer incandescent bulbs. “They didn’t have bright fluorescent lights in 1949.”

On Saturday night, November 17, after being largely shuttered for the past quarter century, the State re-opens as a daily movie house with a gala dinner and a showing of the “Kite Runner.” As in all of his other work, the vision and the details of the renovation are all about Moore. He commissioned Glenn Wolff, a renowned Traverse City artist, to paint two murals depicting the State and its predecessor, the Lyric Theater, from early in the 20th century. The floor of the entrance way is white, black, and red inch-square tile. In the main theater he’s hung draping gold and red curtains alongside Romanesque columns to improve the acoustics. The balcony was significantly enlarged. And patrons can lean way back in their red Greystone theater seats to gaze on a fiber optic ceiling, designed by a local astronomer, that is a replica of the Milky Way over northern Michigan.

Anybody who’s ever worked with Moore know of his enormous energy, fealty to the public interest, and considerable devotion to his own personal narrative. It’s all worked beautifully.  A native Michiganian, he ran as an 18-year-old and won a seat on the Davison School Board which made him the youngest elected officials in the state at the time. His entrepreneurial career in letters — he founded the weekly alternative Flint Voice, serving as its editor for ten years before briefly taking the editor’s post at Mother Jones magazine — was supplanted by a remarkable career in documentary film making in which he and the story he was telling shared top billing. His 1989 breakthrough film about how General Motors and its chairman Roger Smith wrecked Flint was aptly titled “Roger and Me.” It’s the same for the strong political views that have made him a hero of the left and a scourge of the right. It’s an unusual mix of intelligence, confidence, spirit, nerve, ego, and career branding to simultaneously accept an Academy Award, as he did in 2003 for “Bowling for Columbine,” and denounce a “fictitious” invasion and president.

Still, given all of the towering achievements in film direction, as a best-selling non-fiction author, as a television producer, and as a political figure of international stature, Michael Moore’s most enduring achievement may very well be taking shape on Front Street on the east side of the central business district of a Great Lakes city of less than 15,000 people.

Ten years ago he and his wife, Kathleen Glynn, built a home in Antrim County, a 40-minute drive from Traverse City. In 2002, Michael and Kathleen moved from New York to become full-time northern Michigan residents. And in 2005, he and two Traverse City natives, best-selling author Doug Stanton (In Harm’s Way), and well-known photographer John Robert Williams (who took the pictures accompanying this post), founded the Traverse City Film Festival. In the spirit of a grand country hoedown, the three recruited hundreds of volunteers to help manage a four-day event at the end of July that attracted 50,000 people. The next year the festival expanded to six days in the first week of August and attracted 70,000 people. Last summer, the festival solidified its position as a don’t miss event in northern Michigan, counting 80,000 admissions.

Among the many highlights of the festival was how Moore oversaw the installation of state of the art projection equipment to turn existing auditoriums downtown into wondrous places to see great films. One of those venues has been the State Theatre, which dates to 1916, and since the 1980s has largely been a Front Street eyesore, like so many of America’s other downtown movie houses.

But for a week in each of the last three summers the classic State Theatre marquee awoke, a bright constellation visible everywhere on Front Street.

Earlier this year Moore and his colleagues worked their way through some very complicated ownership details and deed restrictions and managed to get control of the State. Last month, they launched a six-week, top to bottom renovation that will cost just $850,000 because at least that much was donated in volunteer time, materials, and equipment. Michael Fitzhugh, the architect who designed the interior and drew up the blueprints, and Thom Darga, the general contractor who managed construction, worked without compensation.

The idea is to duplicate the look and feel of the theater in 1949 when it opened as the State, while also taking pains to incorporate comfortable seating, a 60,000 watt Dolby sound system, a super-size screen, and cutting edge technology in the projection booth. We had a chance to talk on Monday, and Moore told me he had two goals. One was to add to Traverse City’s downtown economy. While other regions in Michigan are trying and largely failing to attract new plants, Traverse City is leveraging its coastal location and strong downtown as a destination. The Traverse City Film Festival adds over $5 million to the economy during its week-long run. The State Theater, a new icon of Front Street, is owned and will be managed by the festival, showing movies seven days a week. Moore said he will personally choose the films.

The other goal was to produce a great place to see movies. “I’ve been in enough theaters watching my own movies to see how poorly they are exhibited,” he said. “How terrible the conditions for watching a movie can be. The decorum. The cell phones ringing. I just had this feeling, like what if I created a great experience, great conditions, to experience great movies.” He paused a moment and then looked up. “This is going to be Blackberry free zone,” he declared, smiling. 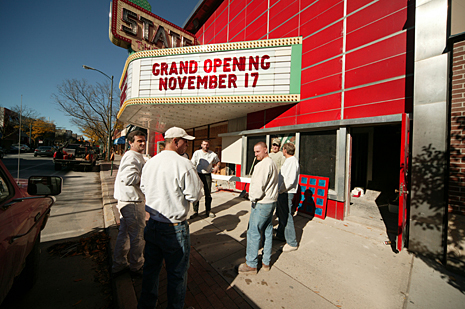 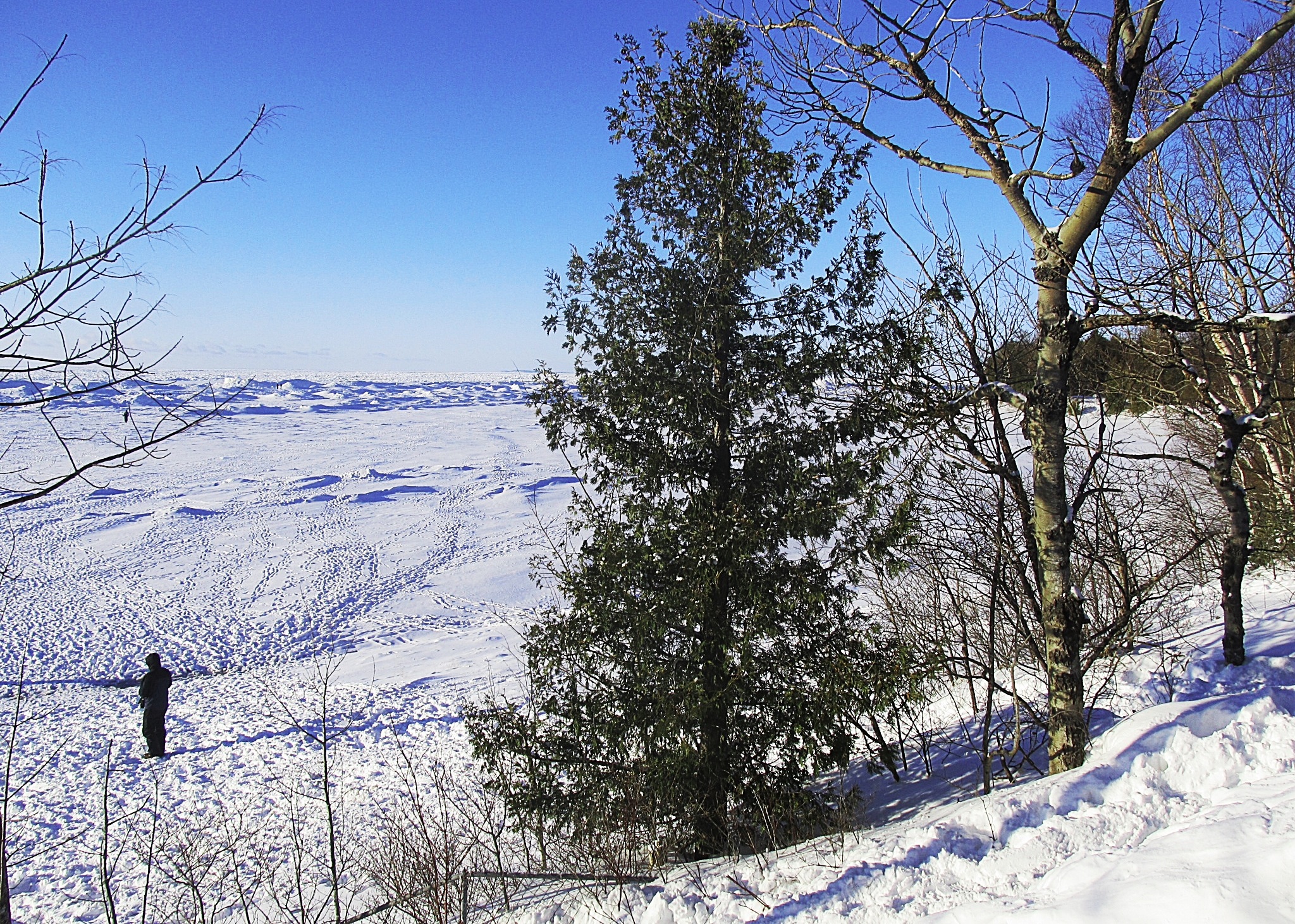