In case you missed it, Al Gore spoke to both houses of Congress today about global climate change, calling it a “planetary emergency.” As a reputation boosting, global elevating, and upcoming book promoting exercise, Gore’s confident stroll through the various hearing rooms that he once occupied as a sitting member was terrific theater. 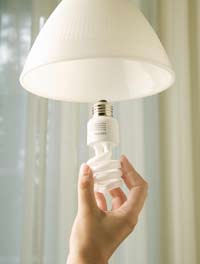 But having been a Gore watcher since the 1980s, when he was a young congressman and I was a young correspondent, I just have this instinct that more may be operating here, if that’s at all possible. In a year when Gore has already won an Academy Award for “An Inconvenient Truth” and could win a Nobel Peace Prize, you might think it intemperate to ask more of the man. Nevertheless its still fair to wonder whether a man of such remarkable ability has one more great turn in him. And that is another run for the presidency.

I can only tell you that Gore is making a difference and his message is heard where it counts. This weekend, at the urging of my 15-year-old son, who’d seen “An Inconvenient Truth” in school, we changed out every single one of the 88 lightbulbs in our home with energy-saving compact fluorescents. The project began with this question. “What kind of light bulbs do we have?” Cody asked. “The old kind,” I replied. “You’re the environmentalist,” he continued, an eyebrow arched. So off we went on Saturday to Traverse City and dropped $320 to save energy and make our latest contribution to reducing greenhouse gases. The political point, though, is that Gore capably reached a 15-year-old with an important message and that kid responded.

The other side of why Gore could be considered to have a duty to run is how the wing nuts in the other party respond to him. One of the earliest indicators of whether you are winning or losing a public interest campaign is how much vitriol you attract from your opponents. When they start calling you names you know you’re sitting pretty. Gore prompts his opponents to lose their minds. Call up Technorati.com, type in Gore, and read the right wing response to his Congressional appearance.

A last point: Though the news media are stirring around the idea that the Democratic field of 2008 presidentiial candidates is more seasoned and adept than the Republican candidates, it’s not all that clear. The Web sites of the Democratic candidates, even New Mexico Governor Bill Richardson’s, are pretty lame at this point, even on the issues that tens of millions of voters care about, including energy and global climate change. Gore on the other hand has a clear message, expertise, and the courage of his views on a momentous issue of his time. And that issue melds into so many others that challenge the country and the planet: clean government, efficiency, fiscal policy, transportation, and energy-wasting, time-consuming metropolitan development patterns that are challenging in substantive ways the rights of Americans to lead productive lives.  Hillary may not survive her unconvincing explanation of why she voted to approve the war. Barack’s peak may be right now and he has only one way to go, and that’s down. Bill Richardson has to do more than be viewed as a rumpled commoner. Al Gore tread confidently into Congress today and he was the smartest, most politically astute, and hottest politician in the place. There’s more happening here than just a couple of hours of earnest testimony.

New American Energy Boom, A Reprieve and a Reckoning