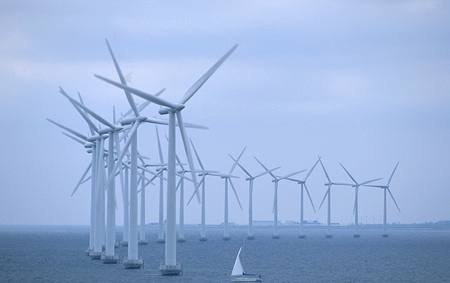 Next month Interior Secretary Ken Salazar is scheduled to rule on a proposal to build one of the most contentious clean energy projects in the country. It is a 420-megawatt offshore wind farm in Massachusetts called Cape Wind. Audra Parker, the young leader of the Alliance to Protect Nantucket Sound, has emerged as a local public interest celebrity as a result of her work to prevent developers from constructing 130 turbines five miles out in Nantucket Sound.

The long battle over Cape Wind, the granddaddy of citizen opposition campaigns to clean energy development, is a reflection of many other such battles across the country, and emblematic of the schism in the environmental community over clean energy development and climate action. This post documents grassroots activism opposing wind energy projects in 12 more states.

Many of my environmental friends are not that concerned, arguing that grassroots opposition represents the give-and-take, checks and balances that have always existed in the green community. My reporting indicates that it could be much more significant than that, and may invite criticism from environmentalism’s opponents.

On the one hand, said a letter this week in my hometown weekly, the Benzie Record-Patriot, environmental organizations have pushed hard for clean energy investment and action to solve global warming. On the other groups big and small assert this or that project is unfit for construction. I’m documenting that opposition in this and a number of other posts.

With wind the arguments generally focus around noise, viewsheds, light flicker, location, and a few more issues. But victory for wind opponents is no victory because the default position now and for the time being is almost always generating power with more fossil fuel, mostly coal. In the risk-benefit analysis how is that coal is seen as less risky than wind?

Nevertheless grassroots activists fighting clean energy are gaining fame and plenty of support. On Nantucket, Audra Parker counts the Kennedy family as allies, including Robert F. Kennedy Jr., one of the Natural Resources Defense Council’s senior environmental attorneys, though the NRDC says the windfarm should be built. The state historic preservation officer also opposes the project because of its location in an area viewed as historically significant, as well as sacred to a number of native American tribes.

Greenpeace supports the project, which was initially proposed almost a decade ago, along with the World Wildlife Fund, the Union of Concerned Scientists, and Dr. George Woodwell, the renowned ecologist and the founder of the Woods Hole Research Center in Massachusetts.

Many of the details of the opposition to the Nantucket Sound development — viewsheds, NIMBYism, scale of the machines, proximity to sacred ground — are consistent with another fight over wind energy nearby on Cape Cod. Wellfleet officials want to place one windmill on town land close to Cape Cod National Seashore, but neighbors are organizing to stop the project.

A year ago, authorities in New York and in Ontario identified Lake Ontario and Lake Erie as likely sources of offshore wind power. In mid-April 2009 the New York Power Authority unveiled big offshore projects for both lakes. Some of the windfarms would consist of 500 turbines towering 45o feet above the lake. Shoreline owners in  Jefferson, Oswego, Cayuga and Wayne counties in New York went to work to halt the idea, which they accomplished earlier this year.

The issues included scale, sediments, transmission lines, water quality, boating safety, fisheries, subsidies, efficiency, and aesthetics, loss of tax base. “The projects are bad community planning, especially in the water. People choose to live in and visit waterfront communities for the view and relaxation. These projects destroy the view, create noise and other pollution and devalue property,” wrote Robert E. Aliasso Jr. and Tom Bishop, co-chairs of the Coalition for the Preservation of the Golden Crescent and 1000 Islands Region.

In Minnesota a proposal to build 52 turbines producing 78 megawatts of power over 32,000 acres in five townships near Red Wing, south of Minneapolis, is running into local opposition. Steve Groth, a rural landowner, has asked Goodhue County to amend the county’s zoning ordinance to establish a yearlong moratorium on wind development to study potential health and safety concerns. He also wants the PAC to increase setbacks between turbines and non-participating dwellings from the state-mandated 750 feet to 3,168 feet. He also wants to increase setbacks between turbines and homes from the state-mandated 750 feet to more than half a mile. The proposal has generated resistance from wind developers, who view Goodhue as a likely site for wind development.

In Michigan, wind development has prompted grassroots opposition in the Thumb region, near the Lake Huron coast, where landowners are objecting to noise and vibration. And on the other side of the state, where Lake Michigan lies, a proposal to build a large offshore wind farm near Luddington has prompted howls of protest from shoreline land owners. The French company that proposed the project has scaled back the number of windmills it wants to build. The state established a blue ribbon committee to develop siting guidelines and regulations.

In Vermont,  a wind project proposed for Herrick Mountain in Ira generated opposition from residents and an ecologist with the Fish and Wildlife Department who said in a letter to the developer that it would damage the Green Mountain ecosystem. The project, proposed by Vermont Community Wind Farm, has been repeatedly attacked, principally for the potential effect it could have of the  ridgeline, along with visual and noise issues.

Citizen opposition in Vermont also has  erupted in other communities, including over a 16-turbine project by First Wind Corp. in Sheffield. But Vermont residents also are supporting some big wind projects, among them a project by Green Mountain Power Corp. and Vermont Electric Co-Op to build up to two dozen 400-foot tall wind turbines along a three-mile stretch of Lowell Mountain ridgeline near Lowell. The windmills, built mostly on private land, would generate up to 63 megawatts of power – enough to power about 20,000 homes. Earlier this month the Kingdom Community Wind project was approved by residents 342-114.

Maine Governor John Baldacci has stirred a hornet’s nest of grassroots opposition with his campaign to speed wind farm developments on and offshore. Citizens in Penobscot County filed suit against a $130 million 40-turbine windfarm to be built on a ridgeline, and earlier this month lost the case in the Maine Supreme Court.

Maine’s Citizens’ Task Force on Wind Power is pushing the governor and the state to issue a moratorium on industrial wind power projects until adequate noise regulations are implemented. Baldacci is resisting the effort, and he is supported by a number of the state’s editorial boards.

In Rhode Island, opposition is mounting to an offshore wind farm near Block Island. Eight wind turbines are proposed in the ocean three miles southeast of Block Island. They will rise 450 feet above the water from steel frames anchored to the ocean floor. And residents of New Shoreham aren’t thrilled.

In Oregon, a Texas company has stirred opposition to its proposal to build a wind project across 47,000 acres on the slopes of Craig Mountain that overlook two sides of Union. The Antelope Wind Power Project calls for 182 turbine. Union opposition focuses on spoiled views, and damage to wildlife habitat. The City Council declared its opposition to the project in December, and a hastily formed group papered the town with “Say NO” posters.

In Illinois, residents of Dekalb County have battled wind farm proposals for 7 years, arguing that they cause illness, nuisance, noise, and other problems.

In Pennsylvania, a wind farm proposal has sparked a fight in Butler Township.

In Wisconsin, Invenergy seeks state approval to build 100 turbines in four communities in what would be Brown County’s first major commercial wind farm. The Ledge Wind Energy Park would have the capacity to generate enough electricity for 40,000 homes. Critics are trying to stop the project and among its many arguments — most of which are consistent with other battles over wind farms — is a new one. They argue the turbines would interfere with nearby telecommunications towers, a point disputed by the county’s emergency safety officials.

In Wyoming, resistance to wind farms appears to come primarily from the fossil fuel industry, which doesn’t want the competition.

Three years ago billboards along I-70 in Kansas protested against the “industrialization” of rural parts of the state as large-scale wind farm development advanced. “Such opposition to wind farm development–and related transmission–threatens to slow growth in parts of the country where populations are small, viewsheds are wide and wind resources are robust,” wrote David Wagman, chief editor of Renewable Energy World Magazine, in February.

How significant is this push back on renewable energy development? Here’s what Gabriel Alonso, CEO, Horizon Wind Energy said recently: “We have 19,000 megawatts of wind energy under development throughout 22 states. We have run, in some specific cases, into opposition. But you need to differentiate between three people making a lot of noise or re opposition within the community. Normally when we peel back the onion, we always find out that we are talking about three people who have economic, real-estate or some sort of interests, and we are conflicting with those interests. So I do not consider ‘not in my backyard’ being a real fundamental issue for us to site projects.”

Is Alonso right? Instinct says he should know. But in so many states the fights over wind are fierce and driven in too many cases by personal sensibility and not keen grappling with the alternative, which is almost always more coal. It’s not like battling a Wal-Mart and winning a wetland and a downtown business association capable of keeping its members prosperous. It’s not like killing a highway and getting a beautiful river valley. Killing a wind farm generally means getting the same-old, which is coal.

If President Calls It Safe, Watch Out

Frack Or Not To Frack? That’s Just One Question

Cleaning Up Those Coal Plants

5 thoughts on “Let Wind Energy Blow? Not In These Places”