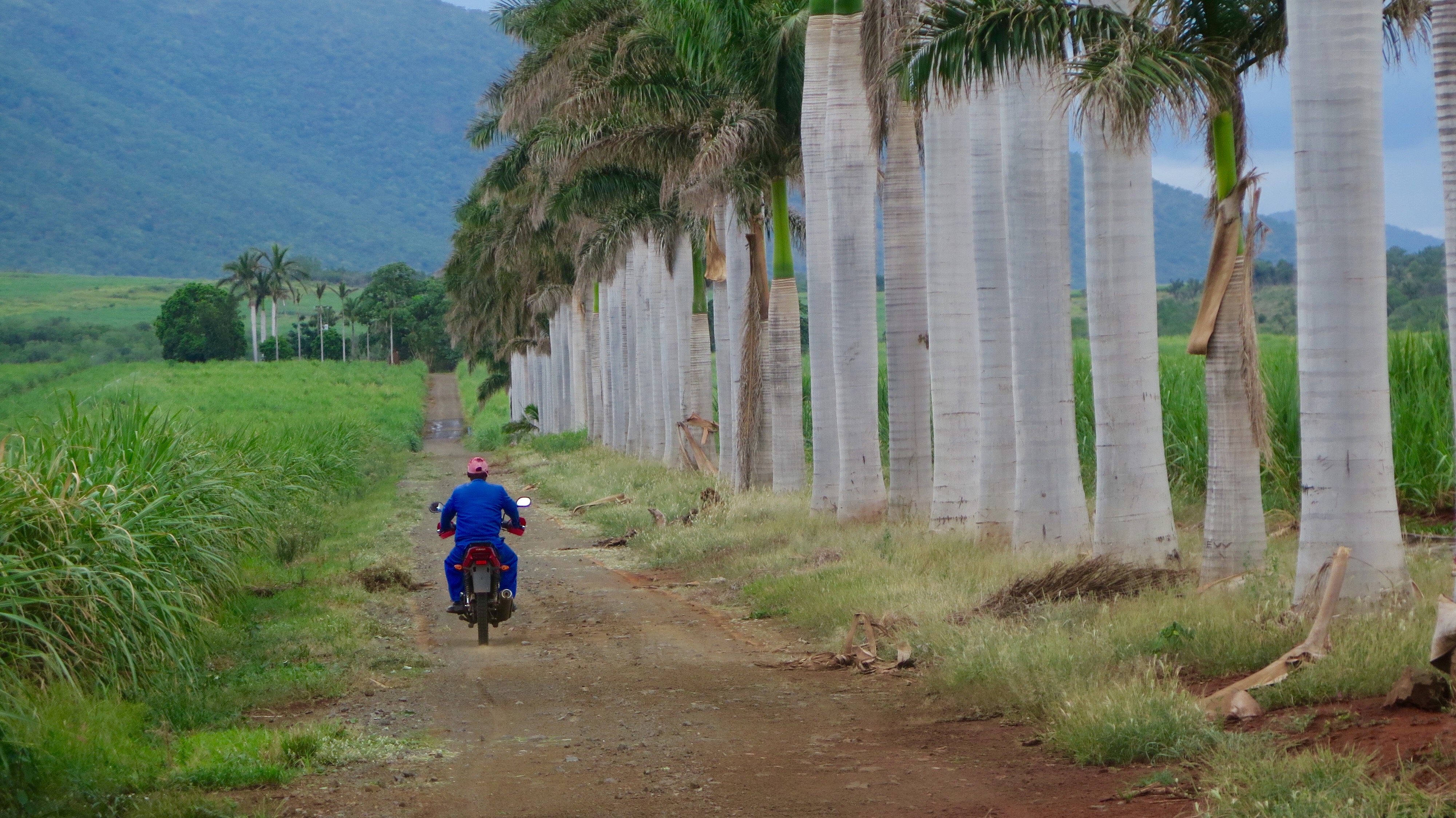 PONGOLA, South Africa — On the last Friday of January, payday on the sugar cane farms of northern KwaZulu-Natal province, a hot sun beat down on the red clay of Cobus Horn’s equipment yard. Nduku Msimanga, taut and muscled as a welterweight boxer, waited there with three other tractor drivers to receive unusually meager pay stubs.

Msimanga, who is 33 years old, supports two teenage boys, a seven-year-old girl, and his wife on the wages he earns on the Horn family’s sugar cane farm just outside Pongola. He’s worked on the Horn farm since he was 23. His pay, usually about 5,000 rand a month ($US 300 at current exchange rates), is tiny by western standards but above average on South African farms.

This year Msimanga’s pay stubs are half that, a reflection of just how deeply South Africa’s worst drought in 34 years is attacking the country’s nearly $US 9 billion farm economy. The drought is also an ecological force multiplier that is aggravating virulent trends in joblessness, crime, and social stability.

It could hardly have developed at a worse moment in this thunderously beautiful, water-parched, and economically reeling nation of 55 million residents at the bottom of Africa. Since December, following an abrupt shake-up in President Jacob Zuma’s cabinet and sliding commodity prices, the South African rand dropped in value to its lowest level ever. It is now worth barely more than 6 U.S. cents. The business confidence index fell to its worst-ever rating. Agronomists project that South Africa could sustain the biggest crop failure in its history. Grain harvests, usually formidable enough to support big export markets, are likely to be half the normal total, prompting expensive imports. Food price increases are anticipated to reach 25 percent. Hundreds of farm workers are being laid off (called “retrenched” here) in KwaZulu-Natal and the four other provinces declared drought disaster areas, where most of the country’s major row crops are produced.

The layoffs and reductions in hours are aggravating the country’s terrible joblessness. South Africa’s 35,000 big commercial farms account for more than 650,000 jobs, seven percent of the country’s working adults. That’s more than South Africa’s mines employ, according to Statistics SA. At least 1 million other South Africans work full or part-time on the 1.3 million small and subsistence farms. As heat and dry weather kill crops, workers are being forced from the fields. More than one in three working age adults are now unemployed.

The endowment of optimism and progress that South Africans embraced at the start of the new multi-racial elections and the formal end of Apartheid in 1994 has dissolved into a period of deepening national economic and social stress.

This is the dark currency of financial turmoil and ecological malice that Nduku Msimanga confronts. His skill as a tractor driver, and his hard work and attention to detail tie him to Cobus Horn and his family’s big farm. And though Horn assures Msimanga that his job is secure, the combination of dry weather and a large payroll can quickly shift the basic math of farm employment on a sugar plantation.

In the cooling shade of Horn’s equipment shed, Msimanga explains that his fortunes are more than bleak. They are inescapably miserable if he loses his job. “I have no other skills,” he says, frowning. “I can not pay to get another skill. I have no money. There are no jobs here. No jobs.”

In a powerful way Msimanga, a Zulu, and Cobus Horn, the son of a Namibian immigrant who was raised in Afrikaner culture, are tied by land, history, and Pongola’s 70-year-old sugar crop. Thousands of black laborers are essential to the cultivation, cutting, and transport of sugar cane to Pongola’s big 62-year-old sugar mill. White farmers display remarkable allegiance to their farm hands in an agricultural sector that is still grown and harvested chiefly by hand.

It took about a century for sugar to emerge as a staple crop along the Pongola River in the early years after World War Two. Before that, Britain controlled most of South Africa, and in 1843 annexed much of what is now northern KwaZulu-Natal. The holdings along the northern side of the Pongola River, reserved for white farmers, came under regular dispute and attack until the early 20th century as Zulus fought Swazis, and Afrikaner Boers gained dominance over the British and native African tribes. By the early 20th century, Afrikaners planted land along the northern and southern banks of the Pongola River for cotton and citrus crops, corn and vegetables.

The work by white farmers and Zulu laborers was back-breaking and dangerous. Malaria spread from the Pongola wetlands. Summer heat bent farmers and laborers. Black mambas, one of Africa’s deadliest and most aggressive snakes, regularly attacked from hiding places in the bush. The land, though, yielded ample crops when rain was plentiful, and slighter harvests during dry years.

In 1930, the white-controlled national government surveyed the Pongola region for an irrigation network, which was completed in 1935. With a secure source of water, an experimental irrigated farm was developed to test production of vegetables, tobacco, beans, and various fruits. Sugar cane was first planted in 1942. It grew well and very quickly was recognized as a formidable cash crop.

By the time Johan Horn, Cobus’ 69-year-old father, purchased the farm in 1979, Pongola’s sugar plantations spanned 42,000 acres. Sugar cane touches every facet of Pongola, a valley town of 2,000 residents that is normally surrounded by a magnificent sea of moist green cane lapping at the slopes of tabletop highlands. This year the fields are yellowed and stunted.

Before the big drought not much changed in sugar cultivation in Pongola except for consolidation as small farms sold out to larger neighbors. Around 128 big farms today produce most of the region’s typical 1.5-million metric-ton annual cane crop. Each directly employ 30 to as many as 90 farmworkers, with dozens more hired as seasonal help. Some 460 people work in the Pongola Sugar Mill, which was built in 1954. Thousands more people in the region are connected to every other business in town.

The drought, say farmers, is almost certain to change how agriculture operates in Pongola. More drought-tolerant crops are being tested. More water-conserving cultivation practices are under investigation. Some farms will abandon the industry.

On that last Friday of January, Msimanga experienced his own personal drought effect. He received pay for just 12 days of work for the month, a little more than 2,000 rand. Horn cut his farm’s work week to four days. Earlier in the day Horn informed Msimanga and his other senior skilled workers that the short weeks would continue indefinitely.

The hot and dry conditions had brought to a standstill much of the cultivation and irrigation work on the 315-hectare farm (778 acres). There was no water. Horn, who is 36 years-old, described his strategy as having two goals: One is to use the time for equipment maintenance and repair. The second is to send a signal of loyalty to his skilled workers. Less skilled workers, mostly women who weed and help with vegetable production, are working two days a week. “We have no vegetables this year,” said Horn. “But I can’t just leave people with nothing. I can’t do that.”

The new work schedule came as no surprise to Msimanga. KwaZulu-Natal, which lies along the Indian Ocean east of Johannesburg, is one of two neighboring provinces that form the center of South Africa’s typical 19-million metric-ton sugar cane production sector. Msimanga said he was aware that mill managers predict that the sugar harvest will be cut by a third. Msimanga also had visited Pongola’s mill, the economic heart and soul of a sugar town. It is normally a hive of activity in preparation for the start of the milling season. In early February it is as quiet as a retirement home.

Milling will start in April this year, weeks later than normal. The mill anticipates crushing 500,000 metric tons of cane less than it typically handles. The cane cutting and hauling work will be weeks shorter than normal, meaning that farmers and farm workers are sharing sharp reductions in revenue. Msimanga says he can endure smaller pay stubs. “Without work we have nothing,” Msimanga said. “We have four days. We make it work. It’s something. There’s nothing more we can do. There’s no water. But we still have a job. We can eat.”

The South African Sugar Association, which represents the 24,000 sugar cane producers and 14 sugar mills in the 12 billion rand industry, projects the cane harvest will be 3 million metric tons less than last year. The result could be a 500,000 metric ton drop in sugar production, or 31 percent lower than in 2015. It is not known how many of the industry’s 79,000 workers will be retrenched this year. This year, for the first time in anybody’s memory, South Africa is virtually certain to be a sugar importer.

The drought is seen as a maddening betrayal, a signal from Mother Earth that the wealth from sugar, planted and harvested in an African valley of incomparable beauty, is not nearly as assured in the 21st century as it was in the 20th.

The Saturday after he was paid, Msimanga boarded a minibus to Ulundi, a small town 125 kilometers south where his family stays. The day was bright and hot. Msimanga was worried, and not just about the small number of rand notes he held in his pocket. Ulundi’s water supply dried up last fall. Water tanker deliveries from Pongola’s drinking water treatment plant have been inconsistent. Residents have gone days without being able to fill their water jugs. His family had a request. “They need water. They asked me to take some,” he said.