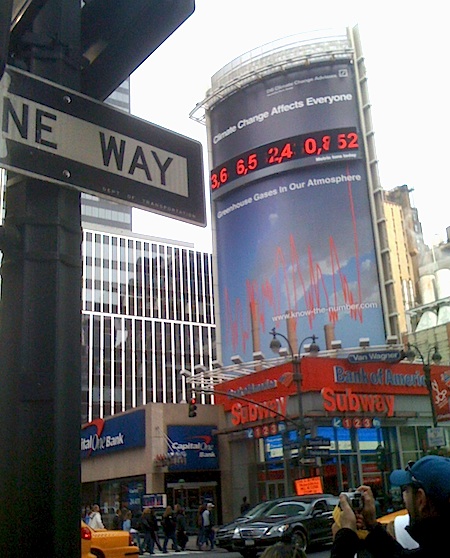 Converging trends  are roiling the clean energy manufacturing and production sectors here in Michigan and  nationally. President Obama knows it and is worried. The collapse of the Solyndra solar plant in California is  a prickly presidential campaign issue. Jobs and the country’s capacity to reduce its climate changing emissions, (as shown in the emissions counter above in NYC), also are big outcomes.

On Tuesday evening, the president told the story of an unemployed west Michigan furniture worker who landed one of 50 new jobs at Energetx Composites, a wind turbine blade manufacturer in Holland, Mich. that is the beneficiary of big state and federal clean energy grant support. Holland, by the way, also is the site of two big government-supported battery plants involved in supplying the state’s electric and hybrid car sector.

The president’s spotlight on the Holland worker and his vow in the State of the Union to “not walk away from the promise of clean energy” reflects, to some extent, his administration’s deep concerns about the swift evolution in overseas competition. He’s also worried about the fast-changing markets for energy, investment capital, and political and public support that are buffeting the American alternative energy sector.

But siting new plants is often a dogfight. Here in Benzie and Manistee counties where I live Duke Energy threw in the towel this month for a proposed 112-turbine wind farm. Opponents were essentially motivated by their revulsion to big towers interrupting a gentle wooded landscape. The issue was scale. Similar opposition is developing to the Obama administation’s proposal to open federal lands to big solar developments, as my Circle of Blue colleague, Brett Walton, discovered in Colorado’s San Luis Valley.

The popular pushback to big new clean energy projects is just one of the sources of turbulence in the U.S. clean energy manufacturing sector. On the one hand, big companies like GE announced plans in October to build a $300 million solar panel plant in Aurora, CO., that will employ 355 people when it opens this year. On the other hand Amonix, which in May completed a $18 million, 244,000-square foot plant in North Las Vegas to put over 300 people to work manufacturing equipment for big solar thermal plants in the desert Southwest, announced on January 25 that it was laying off 200 workers because of slow market conditions.

The picture in the wind energy manufacturing sector is a little clearer, though not by much. Gamesa, the big Spanish wind turbine maker, has two plants in Pennsylvania and employs 800 people. The company has opened over a dozen big wind farms nationally, including three in its adopted state. In 2009 it laid off several hundred workers but has rehired them. Meanwhile Vestas, the Danish wind energy manufacturers has built four wind manufacturing plants in Colorado that employ 1,500 workers.

Several market trends are smacking the wind energy. First is foreign competition, especially from South America, where new wind blade plants have been built specifically for the U.S. wind market, the world”s second largest behind China. The second is the federal wind energy production tax credit, which expires at the end of this year. Vestas, for instance, has threatened to close its Colorado plants if the tax credit is not renewed. While support for renewal is weak among Republican U.S. House and Senate members, it is strong among Republican governors in windy states — Ohio, Michigan, Nebraska, Kansas, the Dakotas — because of the role it is playing in encouraging job growth.

The third big trend affecting the wind industry is the boom in natural gas production, which is lowering prices and prompting more utilities to consider gas-powered generating units. Last week, the United States reduced its estimate for how much gas lies in the nation’s deep shale deposits by 40 percent. But those numbers are almost certain to be revised again, probably repeatedly, as production companies gain a better understanding of what is there. Even with the lower estimate there are still huge reserves of gas, and of oil, in those shales.

A Hydrocarbon Boom Unfolds While Northern Michigan Fears The Wind