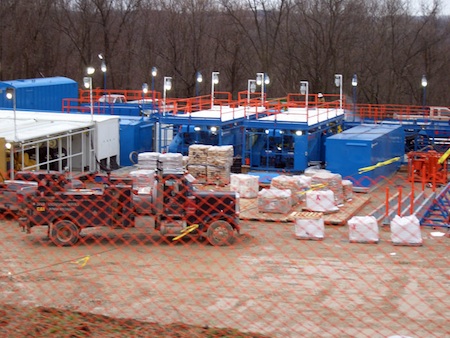 Carl Ganter, the director of Circle of Blue and a colleague, was in China this week attending a World Economic Forum conference. He ran into New York Times columnist Tom Friedman, and talked about the new details Circle of Blue was uncovering about the tightening contest between rising energy demand and diminishing supplies of fresh water. Carl sent a message last night that Tom seemed interested and asked me to prepare a short summary of the series.

All of the chapters, which started in early August with a dispatch from the coal fields of southern Virginia, are on the Circle of Blue Web site. Briefly, here is the summary of Choke Point: U.S. major findings that I sent to Friedman:

1. Energy production is the second largest user of water, next to agriculture, mostly for mining coal, cooling thermoelectric plants and producing oil and natural gas. Energy production also accounts for half of the 410 billion gallons of water withdrawn daily from rivers, lakes, and aquifers. Most of that is to cool coal-fired plants.

2. Climate change is reducing reserves of fresh water in the U.S., especially in the fastest growing regions — California, the Southwest, Rocky Mountain West, and Southeast — where energy demand is increasing the fastest.

3. Unless the U.S. plans more carefully, generating energy from clean alternatives is almost certain to consume much more water than the fossil fuels they are meant to replace. Generating a gallon of fuel from irrigated corn, for instance, takes 650 gallons of water. Generating a gallon of gas from oil takes one gallon. Solar thermal power that is conventionally cooled consumes more water than a coal-fired and nuclear-powered plant. Of all the available green energy technologies, only wind and solar photovoltaic consume less water than fossil fueled energy. Geothermal can save water or consume more depending on the technology used and the location. We found that the Energy Department has been sitting for four years on a critical research report to help lawmakers understand and anticipate these choke points.

4. The next era of hydrocarbon development is well underway in the U.S. as energy companies tap the “unconventional” oil sands of Canada, the oil shales of the northern Great Plains, and the gas shales of the Northeast, Texas, Oklahoma, and the Upper Midwest. The “unconventional” hydrocarbon era is producing more damage to the land, generating more carbon emissions, and using much more water than the conventional oil and gas reserves they are replacing. Essentially, the energy industry is becoming a mining industry, turning carbon-rich sands into fuel and using water shot into the ground under super high pressure to shatter deep shales to release oil and gas. The scale of the industrial enterprise is immense and moving with amazing speed.In tar sands production alone oil companies and pipeline developers are spending $15 billion being to develop the tar sands; $30 billion to build a new network of pipelines from Canada to U.S. refineries (including one that has produced a dispute between State and the EPA), $20 billion to modernize refineries in the Great Lakes, Illinois, Oklahoma, and the Texas Gulf. Developers in North Dakota are spending roughly $7 billion to drill 1,000 wells a year now into the Bakken Shale and are reaping a bonanza — 100 million barrels of oil, 100 billion cubic feet of gas this year. The state is the nation’s fourth largest producer of oil now, behind Texas, Alaska, and California. Three years ago it was barely in the top ten. But the industry also is using billions of gallons of North Dakota’s scarce groundwater to fracture the shale, and generating a modest amount of civic pushback.