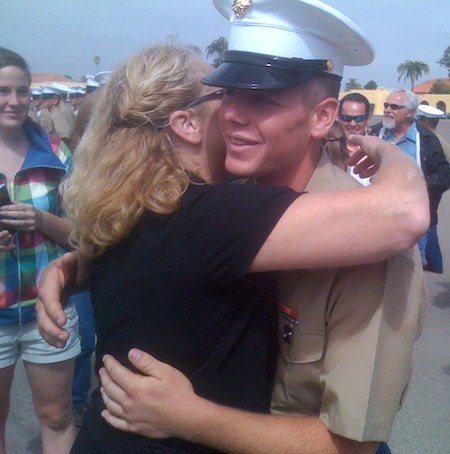 My son, Cody Bates, graduated from Marine boot camp on Friday. There were 565 other young Marines there too — and 2,500 or so friends and family members — from states west of the Mississippi who are trained at the Marine Corps Recruit Depot San Diego. Marine graduation, at least for this parent, is a study in the satisfaction of a son’s accomplishment and the lingering dread of what it means at a time of war. Of the more than 1 million Marines trained at MCRD San Diego since it opened almost 100 years ago, some didn’t… Well you get the point.

Among Cody’s many distinctions is his instinctive sense of duty. He’s the most dutiful person I’ve ever met. Even as a kid he didn’t talk back. If you asked him for help he’d respond. He follows the rules. The worst infraction I’ve ever known him to commit was a speeding ticket early in his driving career. He didn’t hang out with the wrong people. He’s been a quiet guy, not saying much when he doesn’t need to say something. He’s got no tattoos, never smoked, doesn’t drink, is drug free.

He’s also a ton of fun, playful, smart, and like most guys his age couldn’t recall where he was the day before and didn’t much care.

Among his other distinctions is the ability to focus on a goal and not quit until he achieved it. This was expressed principally through amusements. Once he decided a custom-painted skate board was the thing. He did the online research. Identified the supplier. Rallied the funds. Ordered it.

When the board arrived Cody spent a few days with it and was on to the next thing he wanted, which was an X-box game player. We were in NYC when that happened. He knew exactly where we needed to go to buy it at a reduced price. He wasn’t going to be pushed off the trail until it had been purchased. He spent years as a teenager engaged with it.

But you could tell by the way Cody effortlessly mastered Algebra, or repeated verbatim lines from movies he’d seen once or school books he found interesting, that there lay in Cody another intellectual and motivational gear. In middle school he tried a bit of theater, but he isn’t the kind of guy who likes to be that much at the center of attention. He wrestled, which showcased some of his natural strength and stamina, but also put him at the center of attention. He played football, an undersized interior lineman, but really enjoyed the workouts, the hitting, and the team culture.

You wondered as he matured what endeavor would really recruit Cody’s interest, where he would focus all that drive and intelligence, and what would demand more from him than he’d ever given before? It turned out that becoming a warrior was what Cody was really after.

The first we heard of the Marines was near the end of his junior year when Cody said he’d met the Marine recruiter from Cadillac, Staff Sgt. Morgan, and he liked what he heard. He allowed me and his Dad, Mike Bates, to escort him to other armed services recruiting offices just to give Cody different looks, but it was clear that exercise humored us and did nothing to dissuade him. Pam expressed her skepticism often and in some instances with emphatic vigor. But her protests were met with a shrug.

You could see why on Thursday, the afternoon prior to graduation, when the Marines were given time to spend with their families. Cody was a guy transformed. He’d lost at least 20 pounds and five inches off his waist. His gaze was straightforward, pleased, engaging, and he looked straight in the eyes of those he addressed. His posture and bearing were keen and focused. He didn’t stop talking, taking us on a tour of the base, explaining commands, providing insight on military campaigns of yore. At lunch he ate as though it were the first bites he’d had in days. His commanding officers assured parents, during a series of family-friendly briefings, that the Marines had indeed been fed. All of them, to a man, were as slimmed down as Cody.

He didn’t complain about any aspect of his training, and described a good bit of it as fun. His only negative comments were directed at several members of his Fox Company 2123 platoon who he said behaved in ways negligent to the Marine values of discipline, honor, leadership and respect. The Marine principles of guts and valor and duty were deep in him, as they’d clearly been before his arrival. He just knew that being a Marine was what he wanted to do.

Becoming a Marine is a personal choice with national and global significance. Let’s just say that my attention is focused on Afghanistan and has been for more than a year. If he’s considered the potential consequences, Cody has very plainly accepted them. The summons to duty, though, lies in the back of all the minds of people that love him, most dramatically Cody’s mother. At least at this point the path Cody chose for himself, a decision he made with characteristic speed and certainty, is working for him. Enlisting in the Marines at age 17. Graduating at age 19. And four years to find out what he wants to do with his Marine experience.

In a life of discipline and purpose, you get a dozen or so such opportunities to make such a momentous decision. Cody’s first looks to be a good one. We pray it leads to many more good choices. 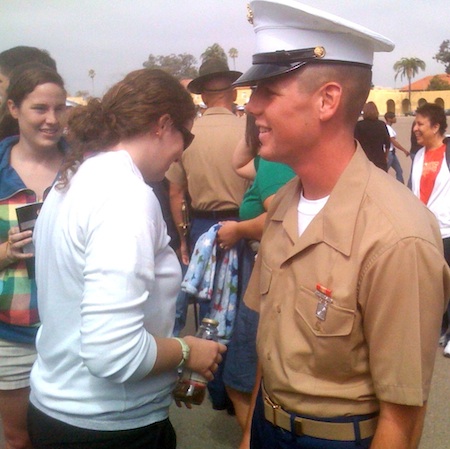