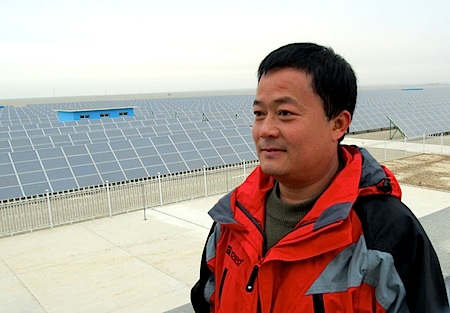 JIUQUAN, China-Business for wind and solar energy components has been so brisk in Gansu Province-a bone-bleaching sweep of gusty desert and sun-washed mountains in China’s northern region-that the New Energy Equipment Manufacturing Industry base, which employs 20,000 people, is a 24/7 operation.

Just two years old, the expansive industrial manufacturing zone-located outside this ancient Silk Road city of 1 million-turns out turbines, blades, towers, controllers, software, and dozens of other components for a provincial wind industry already capable of generating more than 5,000 megawatts per year.

Chen Xiao Yan, a 25-year-old assistant in the New Energy Industry office, said Sinovel, Goldwind, Dongfang, Sinomatech, and 21 other clean energy manufacturers have established plants at the base. Two of those developers also produce equipment for Gansu’s expanding solar photovoltaic industry, which at the end of this year will have 120 megawatts of electrical generating capacity.

Within three years, 10 additional manufacturers will build plants in the base, increasing the workforce to 50,000 employees, Chen said in an interview with Circle of Blue.

“It’s what we do here,” she said with a shrug. “We produce energy.”

Northern Gansu is doing that and considerably more. As part of Circle of Blue’s new Choke Point: China project, I spent much of a week in Gansu reporting on alternative energy and water use. This region of dust and industrial innovation-about as far west from Beijing as Montana is from New York-has very quickly become a vital outpost in China’s rocket ride to the top of the global water-sipping clean energy heap. Prompted by a national decision in 2005 to diversify the nation’s energy production portfolio, and to do so with the goal of reducing water consumption and climate-changing carbon emissions, Gansu and its desert neighbors are pursuing clean energy development with a ferocity unrivaled now in the world.

Along with northern Gansu, there are six other wind energy zones and eight other solar power zones being built in China-most of them in the desert regions of northern and western China. China also has a burst of seawater-cooled nuclear power plants under construction along its eastern coast.

China’s National Energy Administration projects that, over the next decade, generating capacity from wind, solar, and nuclear power will more than quadruple, from 53 gigawatts in 2010 to 230 gigawatts in 2020. The other big non-carbon electrical producer is hydropower, which is expected by the government to grow to 400 GW of capacity by 2020, up from 213.4 GW last year.

Solar generating capacity is expected to jump from less than one GW in 2010 to 20 GW by 2020. Nuclear power is projected to increase from 11 GW to 60 GW in the next decade. (For reference, one gigawatt, or GW, is equal to 1,000 megawatts, or the generating capacity of a big nuclear- or coal-fired power plant.)

Yet China’s demand for electricity is rising so quickly that the massive investment in new generating technologies will not make nearly as large a dent in production-or in freshwater conservation-as many people might expect. Simply put: wind, solar, and nuclear power will climb to around 13 percent of the 1,900 GW of generating capacity expected by 2020, according to government data. That’s up from the nearly six percent of the 962 GW of generating capacity today.

But China’s annual national water use-591 billion cubic meters in 2010-is anticipated to grow by 40 billion cubic meters by the end of the decade. And the increase in water use , a good portion of which is  spurred by new coal production, is occurring in a nation that is steadily getting drier.

Put another way, the $US 738 billion that government authorities promised last year to spend on non-fossil fuel power generation over the next decade will jump start China’s clean energy economic transition. The enormous solar and wind-related manufacturing plants across China already employ tens of thousands of people. They are irrefutable evidence of the capacity of clean energy to spur job growth. They also are a signal to the United States and other nations that China is prepared to dominate wind, solar, nuclear, and other cleaner sources of power that global energy economists predict will eventually generate trillions of dollars in revenue each year.

But clean energy development will not solve one of the most significant threats to China’s modernization – the confrontation between rising energy demand and declining reserves of fresh water. Over the next decade, and likely well beyond that, the water savings from solar, wind, and seawater-cooled nuclear power will not be nearly enough to loosen the noose that water scarcity is steadily tightening around China’s coal production and combustion sector, and its national economy. (See sidebar)

“There may be an ultimate day of reckoning approaching,” said Nicholas Lardy, a senior fellow and China specialist at the Peterson Institute in Washington D.C. “But there are a lot of intermediate steps China is prepared to take and already is taking to hold it off as long as possible.”

See the rest of the article here.

Memo to Hu and Obama: Water and Energy Choke Points Merit Time at the China-U.S. Summit