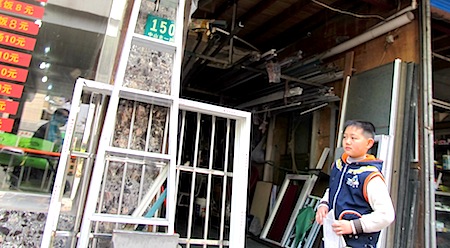 As you know, if you’re a regular reader of ModeShift, my interest for over a year has focused on energy demand and water supply in the United States and China. I study the trends and don’t see how advancing the fossil fuel agenda in both countries really helps provide long-term security. It just looks like we’re determined to make the energy industry richer and more influential,  while we do our best as ordinary citizens to hold on to what we have. At least in China, the last generation’s economic growth lifted 450 million people out of poverty and into the middle class. But the foundations of China’s long-term economic strategy are as shaky as ours.

One of the top U.S. scholars on energy demand trends in the world’s two largest economies agrees. In the final article in Circle of Blue’s year-long Choke Point project, David Fridley told me today that rising fossil fuel prices — caused, in part, by competition for scarce freshwater supplies — is challenging the economic stability of China and the United States.

“To what degree is China taking into account the rising cost of energy as a factor in rising overall prices in their economy?” said Fridley, who is a staff scientist in the China Energy Group at Lawrence Berkeley National Laboratory. “What level of aggregate energy cost increases can China sustain before they tip over?”

“That’s where China’s next decade is heading — accommodating rising energy costs,” Fridley added. “We’re already there in the United States. When energy costs reach 8 to 9 percent of the GDP, as they have in 2011, the economy is pushed into recession within a year.”

The Choke Point project, published in two series of articles — Choke Point: China and Choke Point: U.S. — found clear evidence that both nations view energy production as the top national priority and that declining fresh water reserves impede energy development. The reports found that the water needs of Chinese and American coal, oil and gas producers take precedence over any other economic sector.

Moreover, by insisting on developing new sources of carbon-based fuels, drawn from the desert in China, and from the dry Great Plains and the Rocky Mountain West in the United States, both nations are testing the limits of their national water reserves. They also challenge the capacity of other important economic sectors — agriculture, large metropolitan regions, major manufacturers — to use much less water.

The Choke Point project prompted scientists and water managers in China to expand their research priorities. And it alerted U.S. policymakers and media to the enormous hydrocarbon development occurring at the center of the North American continent.

“China’s continued growth and stability hinge on it finding a more sustainable strategy to cope with its water and energy demand,” Parag Khanna, an author, global strategist, and senior research fellow at the Washington, D.C.-based New America Foundation, told me in an interview. “There would be no better way for China to demonstrate its global leadership than by heeding the important lessons of the Choke Point report.”

“We shined a light on China’s greatest challenge,” added Jennifer Turner, the director of the China Environment Forum, a friend who helped immensely with scholarship and her network of contacts in China. “China has to be better than any other country in dealing with the energy-water choke points because as our reporting showed, they have no wiggle room.”

Job One In U.S. and China: Perpetuate The Fossil Fuel Economy