One of the rules of journalism that I learned a long time ago is that it’s okay to be ahead, but not okay to be too far out front. Another rule  is conflict sells better than cooperation.

Mode Shift, which describes the political, cultural, and economic context of a civic movement that is changing patterns of metropolitan development, is ahead of most other forums in covering these stories. But it’s not too far ahead, which is probably good.

The hard part is that the American Mode Shift is principally a story of collaboration to invent novel ideas that are actually yielding promising results. In other words it’s a good news story, and that violates a basic tenet of journalism in the good ‘ole USA.

Nevertheless it’s comforting to know I’m not alone. Along with the Web site of the Michigan Land Use Institute, and Smart Growth America, there are a handful of other forums that I pay attention to that are chronicling similar ideas and their results, especially those based in the West.

One of the best is New West, based in Montana, which approaches the Mode Shift from a multi-state perspective and does a very good job corralling trends and breaking news.

Another is Tidepool, based in the Pacific Northwest and now managed by the smart people who work for writer Alan Durning at the Sightline Institute in Seattle. Tidepool’s frame is much greener than New West’s, but that fits the ecotopian empire that lies between Vancouver and northern California.

A third forum that is starting to pay more attention to the wave of green, energy efficient development strategies is Grist Magazine, also published n Seattle. Chip Giller, Grist’s founder, is a Brown graduate and a writer and editor from suburban Boston who was exposed very early to high concept environmental ideas. His baby sitter was Bill McKibben, author of the 1989 classic “The End of Nature,” and arguably the best environmental writer of his generation.

I played a cameo role in helping Chip launch Grist, actively contributing pieces for tiny fees that helped to generate credibility. I also participated in the three-day strategic planning session several years ago  (McKibben and John Pascantando, the director of Greenpeace USA, also attended) that helped Chip turn Grist from a tiny start-up to the power house Web publication it has become. 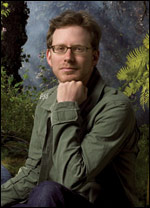 But Chip, (see pix) whose picture graced the cover of Vanty Fair’s Earth Day edition last year, hasn’t been that interested in the greening of metropolitan development strategies until lately. Last year I tried to interest him a series of pieces that described how several cities were taking steps to become greener and more prosperous, and that the strategy was being embraced by dozens more regions. Chip’s response : “Oh, you can be our good news reporter.” Ouch! It was the green equivalent of “if it don’t bleed it don’t lead.” Nevertheless I see more of the Mode Shift in Grist’s report than I’ve seen previously.

The tie is Grist’s concern with global climate change. But whatever the frame, the reporting leads to the same conclusion. Cities are becoming the new incubators of environmental and economic policies that make them greener, more prosperous, and better places to live and do business. It’s good to be ahead. Just don’t get too far out front.