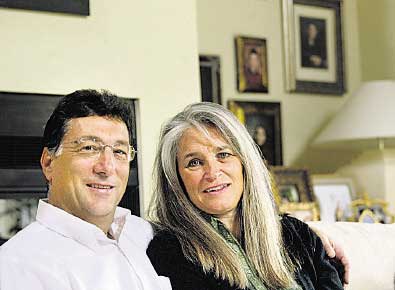 Nearly 13 years ago, in a first floor conference room of the Park Place Hotel in Traverse City, Marty Lagina and Frank Mortel sat side by side across a large wooden table, glowering at me through narrowed eyes. Lagina (with wife Olivia above) was the founder and chief executive of Terra Energy, an independent that had grown to become the most active driller and one of the largest producers of natural gas in Michigan. The aptly named Mortel, who looked and dressed in the dark suits of an undertaker, was chairman of the Michigan Oil and Gas Association, the state energy industry’s trade group. I was a 39-year-old journalist and advocate, the executive director of the brand new Michigan Land Use Institute, a Benzonia based non-profit with 3 staffers and an irregular newsletter, The MCLUC Reporter.

Our publication — circulation 400, printed on a photocopier, collated, stapled, addressed, and mailed by hand — had discovered and was busily publishing a series of probing original articles about a little-known agreement in Michigan’s energy patch between the industry and the Republican-led state government. The pact sharply increased the number of production expenses that producers could write off before paying state royalties. It was negotiated without any Legislative oversight, and was quietly netting natural gas producers about $8 million annually. The same amount was being drained from the state treasury and a popular state trust fund to preserve natural lands. We also discovered that the industry was applying the “post production cost” formula to reduce royalty payments to its private leaseholders, moms and pops who’d leased their mineral rights and were expecting healthy monthly royalty checks. In some cases families received bills from natural gas producers, arguing that the leaseholder owed the company money.

The MCLUC Reporter articles caused a stir and eventually led to an investigation by the Democratic state attorney general, formal audits by the state Department of Natural Resources, an end to the revenue drain from the Natural Resources Trust Fund, lawsuits by the state to recover millions more from natural gas producers, counter suits by some companies, and changes in the law and regulations for managing Michigan’s energy industry.

On that day, early in the unfolding scandal, Lagina and Mortel were after one objective. Halting the reporting. They accused me of hyping an insignificant agreement, getting my facts wrong, having a vendetta against the industry, partisanship, and general unprofessional behavior. They believed the oil and gas industry was essential to Michigan’s economy, provided good jobs, and royalty income for owners of mineral rights. They were tired of defending themselves.

Lagina said it was personal. He’d graduated from Michigan Tech in the late 1970s, and worked as a petroleum engineer for Amoco before founding Terra Energy in 1981. He’d earned a law degree at the University of Michigan in 1982. He was a Michigander, proud of his success and his industry’s value to the American way.

I politely thanked him for the feedback, and asked for assistance and collaboration in improving the industry’s environmental practices. He declined. A few months later, Lagina sold Terra Energy to CMS Energy for $62.6 million. He became an entrepreneur, opened a successful brewery restaurant on Front Street in Traverse City, got involved in a winery, took a long sabbatical in England, contributed to various civic projects. Every now and then his name was mentioned in one gathering or another I attended.

Last month, Lagina and I connected again over energy. This time it was much more comfortable. Reason: We’re working in the same field. He’s founder and chief executive of a renewable energy company called Heritage Sustainable Energy, which is building a $300 million, 12,000-acre wind farm in northern Michigan. Though our conversation started with some old complaints about my ability as a journalist, we gradually moved to the issue at hand: The promise of replacing carbon-based polluting fuels. Lagina said he was committed to the enterprise as a businessman, investor, and as a citizen of northern Michigan. He’s also got an interest in an electric vehicle company in Traverse City.

“I’ve always viewed myself as being in the energy industry,” he told me. “At this point, with all that’s going on, wind makes a lot more sense.”

A few closing thoughts. The shift by former oil and gas industry executives to renewable energy investments is gaining momentum. T. Boone Pickens, for instance, told the New York Times earlier this year that he is planning to raise over $10 billion to build windmills in Texas, the largest wind-producing state. Market conditions are pushing investment capital to wind, solar, conservation, efficiency, and other clean energy practices.

The second point is the influence of Traverse City on its residents. Lagina is among the increasing number of people I know in northern Michigan pursuing much different lives than those they led prior to arriving here. I start with myself, a national journalist turned activist turned non-profit executive in the 15 years that I’ve lived near Traverse City. The director Michael Moore, a gadfly Academy Award winner, whose career was distinguished by aggravating people from the time he left Flint, through his days at Mother Jones in San Francisco, to telling off the president on national television. He arrives in Traverse City, puts charm and collaboration to work to found a film festival and a gorgeous remodeled old movie theater on Front Street.

Ray Minervini built Hooters restaurants in new suburbs before taking control of the old state hospital in Traverse City in the late 1990s and turning it into the Village at Grand Traverse Commons, one of the largest historic restorations in the country and a national showcase of sprawl-fighting new urbanist design. And Marty Lagina, a petroleum engineer who earned his first fortune in the carbon-based energy industry in northern Michigan, and is trying to earn his second in the clean energy sector. What a place we call home.

4 thoughts on “Marty Lagina and the Pursuit of A Clean, Green Economy”