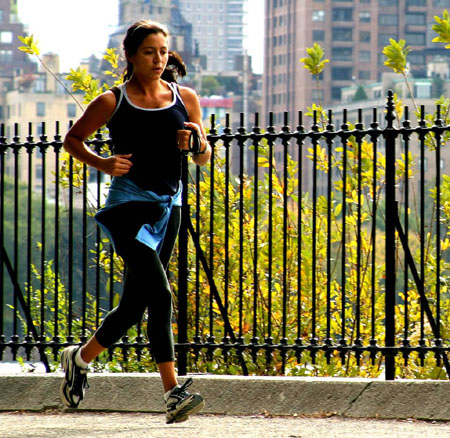 NEW YORK — Early this morning, before the sun peaked over the roofs of the grand old apartment buildings of the Upper East Side, I followed the road bikers and dog walkers and joggers over to Central Park for a splendid four-mile run. New York is full of young people now, bright, educated, trim, and ambitious. A whole bunch of them are up just after dawn to clear their minds and keep their bodies tuned sufficiently to compete in a global capital that is at the leading edge of what great cities are becoming in the 21st century — clean, green, energy efficient, safe, and beautiful. This is a different place than the polluted, crime ridden, deficit-panicked, dirty city that I grew up with when I came of age in the 1970s. New York, according to demographers, is young, younger than its suburbs. Traffic is barred from most of Central Park’s perimeter roadways in the morning, making it a surprisingly quiet green garden for thousands of them to exercise.

This week, Democrats in the United States Senate introduced their version of an energy bill that the message guys in the party described as — hold your breaths — a plan to wean the country from foreign oil and promote domestic energy supplies. The bill has next to nothing in it that will produce more of the prosperous metropolitan regions, like New York, that are becoming ever more energy efficient, and not surprisingly, the strongest generators of jobs, income, and opportunity in the United States. Instead, the Democratic bill is almost solely intended to benefit the corn belt in the Midwest, keep the oil companies happy drilling for domestic oil supplies that no longer exist, and sustain what author Jim Kunstler describes as “America’s drive through economy.”

The 2007 Senate plan deploys almost precisely the same language used to advertise every energy bill introduced in Washington since the 1973 Arab Oil embargo, which produced long gas lines and helped a lot of teenage guys like myself bond with friends as we waited to fill our Dad’s cars. The bills did nothing to reduce America’s oil apetite, especially for foreign oil. In 1973, the United States consumed under 16 million barrels of oil daily, less than half of it imported. In 2006, oil consumption reached 21.9 million barrels a day, according to the Energy Information Administration, of which 13.21 million barrels or 60 percent was imported. At current prices, the US is sending roughly $800 million a day out of the country, nearly $300 billion in cold, hard, needed American cash sent overseas a year.

What’s so dismaying about the Democratic plan, like the Republican plans before it, is that the hyped legislative exercise comes as home prices are falling in the suburbs, mortgage foreclosures are rising (they’ve nearly quintupled since 2000 in my corner of rural northwest Michigan), Walmart sales are static, gasoline prices are climbing to nearly $4 a gallon in some parts of the nation, incomes are static, and a war fought for oil in Iraq is not going well. These are the unmistakable signs of the new global order for the United States, still strung out on oil, unable to agree on a national response other than doing more of the same. Even Democrats are divided about plans to secure higher fuel mileage standards, conservation initiatives, and massive subsidies to the nation’s corn growers who already receive 51 cents a gallon from taxpayers to produce ethanol. Meanwhile energy consumption, especially gasoline, continues to rise despite record high prices.

All of America is addicted to oil, of course, and there are no foreseeable substitutes. Which is precisely why Washington needs to pay attention to the places where the habit isn’t quite as strong. One of those is New York City, which has been doing a lot of very smart things for two decades to insulate its citizens from an oil shock and simultaneously produce a better place to live and do business. Yet none of things that New York did, or is thinking about now, is on the national energy agenda considered by lawmakers in Washington. They should be.

From 1982 to 1999, according to a study by Schaller Consulting, New York City spent $24 billion — an average of $1.41 billion annually — to modernize its mass transit system. The intent was to reduce congestion, improve transportation efficiency, provide alternatives for getting around town, lower family costs, and attract residents and businesses to the new  nodes of business activity around the 468 transit stations and hundreds more bus stops. The money was spent to replace or overhaul the system’s 4,500 buses, 1,200 subway cars, 530 of 660 miles of subway tracks, and a quarter of the subway stations.

The demographic and economic results are impressive in every way. Subway and bus ridership in the 1990s increased much faster than the rate of car ownership and use and has continued since. Between 1990 and 2000, for instance, the number of new vehicles in the city climbed by 104,000, from 1.695 million vehicles to 1.79 million, or less than 7 percent. But subway ridership increased by 353 million riders, from 1.028 billion riders to 1.381 billion, or more than 35 percent. Today the system serves over 2 billion riders annually. The effect on gasoline consumption also has been impressive. Drivers in New York City consume an average of 146 gallons a year, less than drivers in San Francisco (238 gallons), much less than drivers in Los Angeles (392) and much, much less than the national average of 463 gallons a year.

The city’s population, which plummeted to just over 7 million in 1980 has climbed to more than 8 million. The number of visitors reached 44 million last year, 11 million more than in 1998, attracting $23 billion in annual spending that employed 333,158 jobs and $5.44 billion in tax revenue, according to city figures. Hotel occupancy rates exceed 85 percent annually. The city’s subway system, which I ride during my trips here, is clean, cool, inexpensive ($2.00 a ride), and the fastest way to get anywhere during business hours. The system is so popular again that peak hour crowding has returned  as a major civic issue.

Earlier this month the city’s moderate Republican mayor,  Michael Bloomberg, proposed further increasing residents’ reliance on transit, and diminishing the influence of cars and light trucks by emulating a “congestion pricing” traffic management program that has been used in London since 2003. If the plan is approved, the city could significantly raise tolls on Hudson and East River bridges and require motorists to purchase permits, monitored by a system of surveillance code readers, in order to charge drivers headed south of 86th street $8 a day. Those who don’t pay face fines.

On Earth Day, Mayor Bloomberg proposed a separate plan to make New York the best big city in the world to live and do business, principally by making it a much greener, energy efficient, and more beautiful place to live. Among its 127 steps is further reducing the use of private vehicles, cleaning up power plants, requiring more green roofs on major buildings, and investing in rapid transit. Congress continues to hug the 20th century. New York and other big cities understand they need to find their own path to the 21st.

“I make this promise to you: I will not spend my last 984 days in office pretending that all is fine and leaving these challenges to the next mayor, who may well pass them off to his or her successor,” Bloomberg said in April. “Residents of a city that is a beacon to the world will not abdicate our responsibility to that world. That’s not leadership. Leadership is about recognizing challenges and seizing opportunities. And we are going to seize this opportunity – to lead the way forward and create the first environmentally sustainable 21st century city.”

Wastewater Disposal From Fracking Can Cause Earthquakes: Ohio Sets Example

Owensboro, Kentucky: What Works, What Doesn’t