KUANTAN, Malaysia — Has there ever been a more disturbing time to be an American? Not in my life. And most certainly not in the 10 years that I’ve reported from outside the United States.

On the way by train and auto from Penang on the west coast to this industrial city on Malaysia’s east coast, I had a number of conversations with Malaysians about conditions in the U.S. Malay people are a guarded lot. Polite. Friendly. Helpful. But not open and inviting like people in the West can often be.

Let me tell you. Donald Trump is as much a focus of interest in this peninsula nation as he is in much of America. The view here is a mix of bafflement, scorn, and pity. Sam Heung, a gold jewelry merchant from Penang who engaged me in a long conversation about American politics described how “Donald Trump is turning the United States into a laughing stock.”

A university student I met by the name of Dinesh remarked at how spiteful and small-minded American democracy has become. “How did so many Americans choose this man?” he asked. “He makes no sense.”

On the day we spent touring Penang, our driver expressed concern. “Your country seems like it is in trouble,” he said.

A teacher from Penang, her name is Eeli, who earned a doctorate from Cambridge University and thought she’d apply for a post doctoral position in the United States, told me she’s thinking differently now. “I’m afraid,” she said, explaining that her black hijab, which covered her head and framed her round face, made her a target. “I have a friend who had a bad experience in New York,” said Eeli. “She was attacked because she stood out.”

That Malaysians pay close attention to events in Washington and the United States is no surprise. This small country of 32 million residents, set at the very end of the Southeast Asia peninsula, and a neighbor to Singapore and Indonesia, has episodically fallen under the influence of the world’s bigger and richer countries.

Malaysia’s well being is heavily influenced by its location as a pivot point for trade between East and West. Indian traders arrived in the 17th century, followed by Chinese merchants. The British colonized the peninsula in the 19th century. The Japanese invaded during World War Two and then financed an era of residential and office construction 40 years later.

Americans have been around, too, mostly as bankers and lately as high-tech manufacturers. For the last five years or so, China has been the dominant economic influence, financing or serving as primary contractors for tens of billions of dollars in port, rail, manufacturing, energy, and real estate infrastructure investments.

With Trump suddenly locking China into a potential trade war that antagonizes global diplomacy, and could dramatically weaken economies in both hemispheres, Malaysians are naturally interested…and not amused. Their loyalties are principally weighted with China, which makes their criticism of the American president pointed and surprisingly well-informed. Congress, they assert, is feckless. Democrats are almost as ineffective. Republicans are viewed here as weak and menacing. And Trump is seen as a dangerous, uncivil, immature, immoral fool.

But unlike Trump’s American opponents, the Malaysians I spoke to do not think the U.S. president’s intemperance is a risk to world order. They see him as a peculiarly American disturbance that is injuring the global standing and well being of the United States. Malaysians I spoke to display a sense of empathy for Americans. They feel sorry for what we’ve done to ourselves. Part of that has to do with China’s clear influence in Asia and the world. Malaysians understand that China is now more economically stout than the U.S.

Plainly that’s true in Asia. Has been for more than a decade. With Trump’s election, and the thoughtless and distasteful way he’s conducted himself, China’s president, Xi Xinping, has moved to the head of the global pack. China, say Malaysians, is more than capable of surmounting the American president, assuring its economic interests, and safeguarding the nations it considers essential to its sphere of influence. One of those nations is Malaysia.

Trump invites attention, largely as a person worthy of mild ridicule. He’s not seen in Malaysia as earning any more than that. 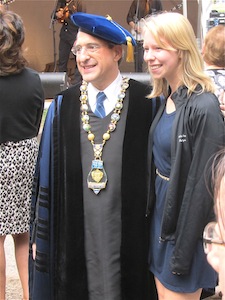 At Yale, Peter Salovey’s Inauguration Heralds The Best of America