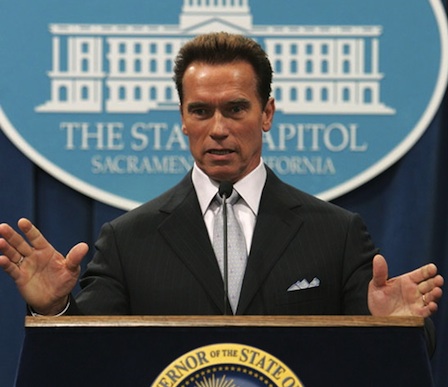 There’s nothing like confronting the big fist of climate denial in Congress to decide new tactics are needed to cool the planet. In the past week, U.S. climate activists shook off the national election’s punch to the gut and began delivering a few jabs of their own.

Other than planning to write a book Schwarzenegger hasn’t mentioned any other pursuit after leaving Sacramento in January. Don’t be surprised to see him in a prominent national and global climate action role. His interest in reducing carbon emissions and growing the clean energy industry is keen and authentic.

Next month, California’s proposal to become the first state in the country to cap and trade greenhouse gases within the state, starting in 2012, is scheduled to become law. This fall, Schwarzenegger joined greens and former Secretary of State George Schultz to convince voters to soundly reject the oil industry-financed Proposition 23, which would have suspended A.B. 32, California’s global warming law. “Prop 23 was the largest clean energy referendum in history,” Schwarzenegger said yesterday. “The oil companies flexed their muscles, trying to overturn our environmental law. We flexed back.”

Scientists also decided this week to join the fray. The American Geophysical Union, the country’s largest association of climate scientists, said on Monday that 700 researchers have agreed to push back against their critics. One of the leaders, John Abraham of St. Thomas University in Minnesota, is developing a rapid response group that includes three dozen leading scientists to support the consensus on global climate change.  The group is almost certain to be busy, the New Yorker’s Elizabeth Kolbert pointed out this week, since climate-science denying conservatives are taking over the House and “the misinformation is now coming from the very people charged with solving the problem,”

Not to be outdone in the opening of what could be a new era of climate stridency, one of the country’s green titan organizations has decided it’s going to be a lot less polite in its climate advocacy. Fred Krupp, the president of the Environmental Defense Fund,  said on the Huffington Post that his organization is re-evaluating its tactical approach to climate action. “It is time to sharpen the nation’s focus on the businesses that obstruct vital progress,” Krupp wrote. “For EDF, that means our historic interest in cooperation over confrontation will be recalibrated.”