As cities on the East Coast sweltered in the sort of dispiriting record-breaking heat that climate scientists accurately predicted, the Obama administration’s lawyers were in a federal appellate court in New Orleans today to reinstate the moratorium on deep sea oil and gas exploration the Interior Department issued in May. Last month a federal district judge with investment interests in the energy industry struck down the temporary ban on new drilling. 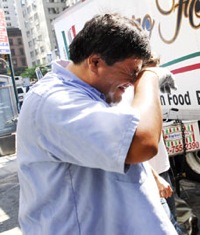 It’s been that kind of week. On the one hand, the Earth is exhibiting so many of the dreadful symptoms of an atmosphere unnaturally warmed by man. The National Snow and Ice Data Center said on July 6 that the expanse of Arctic sea ice had shrunk in June to the lowest level ever recorded. Asian climatologists reported that glacial melt in the Himalayas was accelerating. Record rains in Oklahoma and Arkansas in the last three weeks produced flooding that has killed more than 20 people.

Criminalizing Scientists
On the other, those who defend the fossil fuel industry and deny that the Earth has entered the era of manmade climate change press ahead with their dangerous work. Virginia Republican Attorney General Ken Cuccinelli is prosecuting a much-disputed fraud investigation of climatologist Michael E. Mann, who served on the University of Virginia faculty for six years. The idea to prosecute climate scientists was first introduced by Oklahoma Republican Senator James Inhofe, who in February issued a report that identified several respected climate scientists as potential criminals.

One of the accused was Dr. Mann, who now conducts his research at Pennsylvania State University. Cuccinelli based his investigation on a number of email messages, authored by Mann, and stolen in November from a data bank at the Climate Research Unit of England’s East Anglia University. A spokesman for the attorney general says Cuccinelli is scheduled to make his next court filing on July 13 in a case that the university, the American Association for the Advancement of Science, and 255 members of the National Academy of Sciences say is tantamount to a scientific witch hunt.

Science Cleared
That charge gained substantial credence over the last seven days. On July 1, for the second time since February, a Penn State investigative panel that also looked at the stolen emails confirmed the quality of the climate science that Mann conducted. And on Wednesday, an independent investigative panel commissioned by East Anglia University was the third and latest independent British review committee to clear Mann and other scientists who wrote the email messages of any dishonesty, ethical lapses, or unsound scientific practices. “We find that their rigor and honesty as scientists are not in doubt,” said Sir Muir Russell, the panel’s leader.

President Obama and Senate Majority Leader Harry Reid are pushing the Senate to introduce, debate, and approve comprehensive energy legislation this year, and preferably before the August recess. The BP Gulf calamity, record East Coast heat, and dangerous heartland rain are unmistakable signs of the rising costs of a fossil-fueled economy and inaction on climate change. The exoneration of climate scientists and their important research ends legitimate questions about the causes of the warming planet or its fate if nations do not respond. The urgency to pass a comprehensive climate and energy bill in the United States increases by the week. Very plainly, the moment is here for the Senate to act.

Despite Divide Inside the Tianjin Climate Conference, China and U.S. Are Cooperating in Race To Deploy Advanced Coal Technology