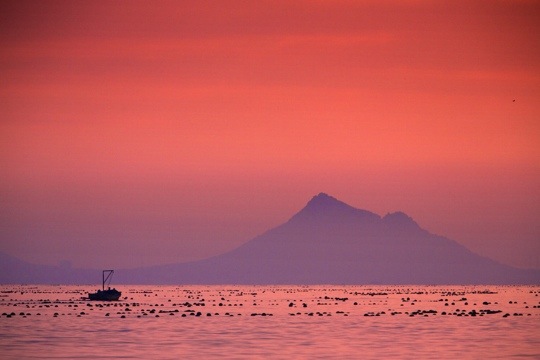 QINGDAO — At dawn the surface of Aoshawei Bay is a grid of black spots, line after line, straight as the rays of the rising sun, from one shoreline to the other. The spots are bouys that support the submerged platforms and thick netting that grow scallops and clams, oysters and mussels, and enclose immense mats of edible kelp. The bouys, tended by fishermen in wooden boats gray and weathered by decades of use, are the most visible features of an aquatic food factory that employs thousands and feeds millions in this province of 96 million people.

And as my colleague Carl Ganter and I learned during an eye-opening interview with Yi Zhou, one of China’s top marine ecologists, Aoshawei Bay is an especially productive pearl in a string of clean Pacific coast bays that form the tidal infrastructure for Shandong Province’s marine aquaculture industry, the largest producer of farmed shellfish on Earth.

“Thirteen million tons a year,” exclaimed Yi Zhou, a professor of marine aquaculture and ecology at the Institute of Oceanology, a research unit of the Chinese Academy of Sciences located on a shoreline campus here. “Chinese marine aquaculture produces 13 million tons of shellfish a year, more than any other country. Seventy percent is produced in Shandong.”

Yi Zhou explained this to us in a second floor conference room overlooking one of Qingdao’s broad sand beaches and in the lovely late afternoon light. Carl, a photographer and co-founder of Circle of Blue, has been to China 10 times. This is my sixth trip in less than two years. Both of us are accustomed to China’s off-the-chart scale and dimension in almost everything. So 10 million tons of shellfish produced in nearby coastal waters, including this city’s own Laoshan Bay, wasn’t surprising.

What came next was.

In the next 45 minutes, and calmly responding to a fusillade of questions, Zhou explained the gathered facts, largely confirmed by science journals and other Qingdao environmental professors, about production practices that have helped make Shandong’s marine aquaculture industry an apparent model of local food production that is ecologically sustainable and safe.

Accomplishing those feats is almost entirely the result of a neat convergence of resource, market, and policy trends that are distinctive to Shandong Province:

1. The province is rich in tidal bays that fill with cold water fortified with the sort of micro-nutrients favored by shelllfish. They also empty, in effect transporting and distributing marine wastes that the resident shellfish also filter as part of their natural feeding. Those wastes also provide nutrients to the enormous floating edible kelp beds that are raised alongside the shellfish. It’s like planting marigolds alongside cucumbers in an organic garden.

2. China’s appetite for shellfish is growing, and so is the world’s. Shandong is now an important shellfish exporter, which keeps prices high and helps fishermen earn good livings. Production increased three percent a year since 2000, said Zhou.

3. Though Chinese marine production techniques emphasize intense aquaculture density, Zhou said they do not challenge the ecological capacity of the coastal bays. The waters north of here in Sanggou Bay, for instance, are so packed with shellfish and kelp beds that, from the air, it looks like a patterned blanket has been thrown over every square kilometer of the surface. Oxygen levels are high, though. Water quality is very good, Zhou said.

4. Qingdao and other coastal cities in Shandong that support big marine aquaculture sectors are not draining untreated municipal sewage and industrial wastes into their coastal bays. Qingdao, for instance, has made a big investment in sewage treatment plants and spent the last decade closing many of its old steel, chemical, and metal plating factories, all among the worst industrial polluters.

Each one of these points, needless to say, conflicted with everything I thought I knew about Chinese aquaculture. I’ve since learned more.

My poor impression of Chinese aquaculture is prompted by news articles over the years about tainted meal, applications of antibiotics and other drugs, and exposure to untreated wastewater in the production of fresh and marine fin fish — bass, catfish, eel, and other species.

In 2007, the federal Food and Drug Administration issued a food safety advisory about Chinese fin fish imports after its tests of fish flesh showed the presence of elevated levels of antibiotics (used to battle diseases) that are outlawed in the United States.

Chinese authorities also have focused on fin fish and shrimp farms as sources of serious water contamination. One study in 2010 found that production techniques along the Bohai Sea, well north of here, that involve raising shrimp in huge indoor facilities, produced 43 billion gallons of raw untreated wastewater annually. The filthy water was discharged directly into the sea.

Yi Zhou asserted in our interview that the marine shellfish industry has not been plagued by similar water contamination and drug use. The waters of the bays where shellfish are produced are clean. Shellfish gain their food from the tides. They are not fed. And fishermen don’t use antibiotics or any other drugs to raise them. In fact, he said, raising his eyebrows, clams and scallops and snails absorb carbon dioxide to make their shells. It could be argued, he said, that the marine shellfish industry was helping to reduce atmospheric concentrations of climate-changing gases.

Last week Carl spent a night in Aoshawei Bay, waking before dawn to photograph fishermen starting the day. He found an enterprise that encompasses the entire shoreline.

He noticed big concrete buildings that hold tanks that grow sea cucumber larvae. When the larvae are mature they are transferred to expansive outdoor pools made of cement, cut stone, and boulders that fill and empty with the tides. Carl walked on the walls of the pools, wide enough also to serve as a resting place for the big guard dog on a chain that snarled an unmistakable warning not to draw any closer.

Sea cucumbers are a delicacy that sell for $4 or $5 each at market. “In another pool there were high walls, a fence, and video cameras,” said Carl. “A sign said trespassers are prosecuted. The message was “don’t steal the cucumbers!”

The pier was alive with fisherman attending to their boats and mending lines. Women wore rubber boots and raincoats. Their headlamps shined focused beams as they emptied nets, and sorted oysters and scallops. The wooden mallets used to knock shellfish from the nets, and the thud of shells hitting the concrete and stone pier was like a seaside percussion section, rhythmic and insistent.

Around 5:15 the sun rose on a still ocean. Small engines, sputtering, fired to life. The scent of fish and crabs was everywhere. And so were the black bouys, visible in the rising light. Too many, said Carl. Way too many to count.

In Hunt For China’s First Shale Gas Wells, An Encounter With The Police