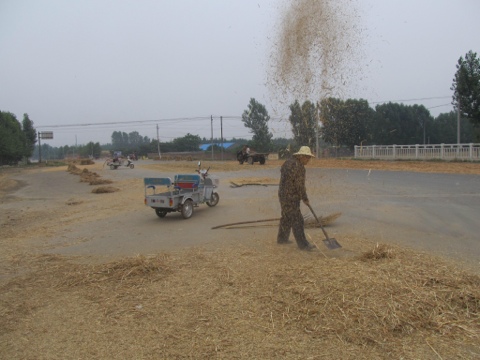 XINXIANG — The fields of Henan Province, one of the important centers of global wheat production, spread beyond this city’s high-rises, a prairie of dusky grain in every direction to the horizon. Every meter, every mu, a Chinese measurement of land expanse — 15 mu fit into an acre — is taken with ripening wheat.

The harvest has begun. Workers cut stalks with long blades and haul the wheat out of the fields on their backs. Farmers spread the straw and seed heads on the broad boulevards, just built and reach far from the city. They rely on trucks and cars to roll over the piles, the streets serving as long linear threshing tables. Then, with pitchforks, men and women stab hard at the crumbled piles and toss the grain high in the air, the wind carrying the bits of straw away from the seeds. The streets at this time of year are an inch deep in drying wheat the color of a dull yellow sun.

China confounds this visitor from the West. Service in restaurants in Chengdu is distinguished by such indifference to detail that the only prompt response comes with a request for the check. Checking in and out of a hotel in Gansu Province takes 25 minutes. It grinds up so much time you have to build the checkout into your travel schedule. Taxi drivers in Beijing are surly and difficult, like mood-swinging teens. Flagging a taxi in China’s capitol reminds me of the hit and miss uncertainty of junior-high dating.

Yet China’s stunning airports are so well dsigned that even with the crowds, moving from the dropoff curb to the gate — through seat assignment, bag check, and security — took 12 minutes this morning in Zhengzhou. The high-speed train from Beijing to Xin Xiang, a 660-kilometer trip, cost $25, took five hours at a top speed of 155 kilometers per hour, or nearly 100 mph. Almost every seat on the 15-car, 1,500-passenger train was taken. Bathrooms were clean, even near the last stop. In the United States we have a political party that views high-speed trains in the same dimension as gay marriage — an aberration in the human condition.

And here in Henan, farmers work so hard and efficiently at raising enough grain for a nation whose appetitie for noodles and rice steadily grows larger that every available square meter is planted, even the space between the headstones in a graveyard. (See pix below)

The average Henan farm, according to experts I talked to at the Institute of Agriculture here, measures about one mu. That makes western style mechanization with big tractors, big planters, big harvesters impractical. But China also hasn’t experienced the rural depopulation that drove farm families and workers from the American countryside from 1960 to 1985, and essentially drowned one stoplight towns in a sea of business bankruptcies and empty storefronts.

There are no such empty spaces in rural China. Men and women scrub the fields clean of weeds by hand. They toss wheat to the wind by hand. They pull vegetables from the fields, stack greens and tomatoes and corn and squash in the back of three-wheeled electric carts. With their pre-school children standing beside on the seats beside them, they transport the harvest at dawn to big street markets that by 6:00 a.m. are jammed with buyers. The outdoor markets hum with the same high-amp crowd noise that accompanies high school football games in the United States.

I am here for three weeks to study how the Chinese economy can sustain the high growth rates that have marked its rise to global prominence in the last two decades. Demand for energy and food confronts this nation’s declining reserves of fresh water. The choke point, which we reported on last year for Circle of Blue, is tightest in Henan and provinces north and west of here.

China’s central government asserts that the nation, already the world’s largest grain producer and energy consumer, can solve its water supply dilemma and simultaneously grow with the immense speed and scale that Chinese citizens and world markets have grown used to.

How to execute that trick is very much a subject of serious consideration and research in Beijing and provincial governments. The U.S. economy, as we’ll see in future posts from here in ModeShift, depends on China’s succeeding to an extent that most Americans will find revealing.

I like China’s chances. All that grain, tossed to the sky, little brown clouds that for a brief moment look like a swarm of bees scattering from a broken hive, are evidence of a determined and hard-working people that know what it takes to thrive. 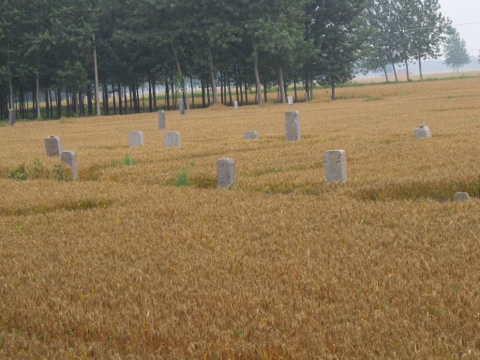