If you read the growing number of economic development proposals about how to solve what we in Michigan call the “one state recession,” it’s readily plain that they all say pretty much the same thing. Promote the idea that educational attainment is a priority, and make it possible for more students to attend and graduate from college. Improve Michigan’s cities so that they are magnets for talented entrepreneurial young people. Develop strategies that leverage Michigan’s treasure trove of natural resources in new ways. For instance, a state surrounded by more clean fresh water than any place on earth should be the planet’s leader in developing new companies and technology to promote its sustainable use. Michigan, in other words, has to figure out what it wants to be.

That, friends, is a new idea. And as anyone who’s paid attention to the 35-year decline of the American auto industry knows, new ideas aren’t a virtue in Michigan. The hierarchical way of doing business, learned in the auto industry and which worked so well in Michigan for much of the 20th century, is not only obsolete it’s completely unfit for the innovative, collaborative, accelerated, and competitive 21st.

Now, we aren’t the only old economy state challenged by its own outmoded rules of the game. Another is Maine, where fishing and woolen mills and paper factories are all going the same way as the American auto assembly line. But Maine, which has just over 1 million residents, one-tenth as many as Michigan, is on the verge of figuring out what to do about it.

Last October, GrowSmart Maine, the state’s non–profit smart growth organization based in Yarmouth, held a conference that attracted 800 participants, all of whom gathered to hear what the Brookings Institution recommended for building the state’s new economy and ensuring the quality of life. Brookings spent a year studying Maine and its final report, “Charting Maine’s Future,” is a great piece of economic and cultural analysis and can be secured on the GrowSmart Maine Web site.

The report’s most important contribution was not in identifying what was wrong with Maine, but in focusing on what was right, especially Maine’s fabled high quality of life based on its maritime and North Woods culture, and all of its innovative people, many of them educated in New England’s elite colleges and universities. What was missing, said Mark Muro, the report’s principal author and a policy specialist at Brookings’s Metropolitan Policy Program, was discipline. The courage to decide to act.

The Brookings researchers, financially supported by a ton of money raised by GrowSmart Maine, suggested three steps to prosperity. The first two would establish a $190 million fund to revitalize cities, protect forests and farms, and make it easier for people to hunt and fish, and a $200 million fund to promote innovation and entrepreneurism.

Now right here is where Maine can help Michigan. Brookings suggested paying for the two investment funds by eliminating waste, duplication, and inefficiencies in state and local government. “A top-to-bottom overhaul of bureaucracies would not only improve service and finance needed  investments, but could also make a down payment on tax reform,” said the report. 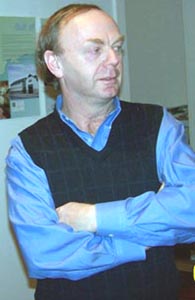 As Alan Caron, GrowSmart Maine’s founder and executive director (in pix left), told me earlier this month, Brookings helped his organization fashion the perfect message of the moment. Conservatives like the limited government piece, while liberals hanker for the government activism portion. Maine knows its paramount challenge is defining its place in the global economy. The state now has a message — the money saved here can be invested there — that makes such sense that the political community, including both parties and every level of government, from the town halls to the Legislature to the governor’s office, is  essentially on the same page. Bills to enact the full scope of the Brookings recommendations have been introduced. Serious debate is under way. Alan told me he expects many to be approved. A poll of 500 registered voters that GrowSmart Maine released on February 1, 2007, showed that 91 percent of those polled agreed that the  Legislature should “streamline government al all levels to free up resources for investment in the new economy and lowering taxes.”

3 thoughts on “Charting A Future For Michigan Through Maine”