Not long ago, in Denver, a Douglas County Commissioner told me that one of the impediments voters faced in approving a nearly $5 billion sales tax increase in 2004 to build the West’s most extensive regional rapid transit system was old attitudes about trains. “The critics, including our governor, kept saying nobody would ride a train,” she said. “This is the West. You have to pry the keys out of people’s hands before they’d get out of their cars.”

Well, every year since then transit ridership has climbed in the United States, including in every western city that has built a modern rail transit system. That includes Dallas (see pix) Denver, Portland, Phoenix, Sacramento, Los Angeles, San Francisco, Salt Lake City, San Jose, and San Diego. And ridership is climbing in the East and Midwest, too. This week the American Public Transportation Association released its latest annual report on transit ridership that confirmed the trend. “Americans took 10.1 billion trips on local public transportation in 2006 – the first time in 49 years,” said the association. “Over the last decade, public transportation’s growth rate outpaced the growth rate of the population and the growth rate of vehicle miles traveled on our nation’s highways.”

“This significant ridership milestone is part of a multi-year trend as more and more Americans ride public transit to get to destinations important to them, while realizing the benefits of saving money and avoiding congestion,” said William W. Millar, president of APTA.

As a guy born and raised in White Plains, a railroad suburb north of New York City, I never understood the cultural 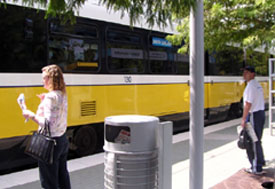 reluctance to rail outside the major cities of the East Coast. My buddies and I used the Metro North line to get into the city. I rode Amtrak to Philadelphia and the Paoli local commuter train from 30th Street Station to get to college in Haverford, a Main Line suburb. After graduation I lived in Boston, Charleston, and Washington and regularly rode Amtrak to New York, where my employers were based. Riding the commuter lines and Amtrak reduced my costs for maintaining a car, and when I left Washington in 1993 the precipitous rise in the value of my Bethesda home was largely the result of its proximity to the Medical Center stop on the Washington Metro’s Red Line, about a mile walk away.

Now there’s mounting evidence that many more Americans who were never raised to ride commuter rail lines are growing more comfortable with this transportation mode shift. A major national infrastructure investment in rail construction needs to be part of the energy, environmental, and national security platforms of every candidate for the presidency. There’s nothing about many more miles of rail in the United States that doesn’t make plain sense.