Last week the Traverse City Record-Eagle, which does a decent job reporting on northwest Michigan’s population growth and business development, published an article with these facts. In 1997, shoppers in Grand Traverse County spent 58 percent of their money for retail sales in the Traverse City. Last year, according to a new economic analysis, the city attracted just 12 percent of those sales.

As a measure of the quality of life, the percentage of retail sales held by a central city is hard to beat. As the percentage of retail sales falls in the central city so does the quality of life in the region. That’s because traffic, water, and air pollution, family costs and stress increase in the surrounding suburbs. Safety, security,  and the sense of place that drew people to northwest Michigan in the first place decline. The transition is steady, almost episodic, like standing in a river and trying to hold back the current. And after 10 years people pause just for a moment and wonder what the hell happened. The pace of life quickened. Costs went up. Their time got tighter. The good life they’d promised themselves gradually evaporates in the hothouse of the new congested and expensive suburb they’d allowed to be built. 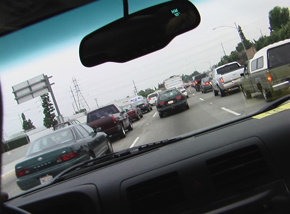 Over the last 10 years, it’s not as though Traverse City’s Front Street, the main business district, developed an acute illness, though the new economic study indicates that with its high rents and boutique stores, the downtown business and retail district could be in trouble. The more significant trend occurred in the surrounding townships, particularly Garfield Township which used its master plan and zoning to design an auto-centric place, complete with requirements for parking, ample setbacks, sewer and water extensions, and expanded roadways. Orchards that once supported cherry trees were converted into shopping centers and hotels and big-box stores. Tens of thousands of new residents headed in their cars to a sparkling new array of national retail destinations. Garfield and its neighbor, Blair Township, attracted them all — Wal-Mart, Menard’s, Lowe’s, Home Debot, Best Buy, MC Sports, Kohl’s, Rite Aid, Borders, Staples, Office Max.  Garfield is the place you go to buy lightbulbs and see a movie. Traverse City is where you can find a candle lit meal  and gourmet chocolates.

Traverse City has managed to keep most of its downtown businesses open because over the last decade the regional market expanded. But Michigan’s stagnant economy is catching up with the small downtown stores, many of them family-owned and not as capable as they once were of competing with the national chains. Money is tight. And the regional and national markets are tilted in the favor of the big boxes. We taxpayers build the road and sewers, set the zoning, and award the real estate investment tax loopholes and global trade agreements that make Wal-Mart and the rest tick. Meanwhile we tax the family-owned businesses, charge high rents, and discourage housing investments that make it possible for working adults and their families — shoppers in other words — to live anywhere close to downtown. Traverse City, for instance, is getting set to once again prohibit people from renting out granny flats above their garages, which would encourage students and young families to live downtown.

Much has been written about the phenomenom of purposefully aiding the big-box companies that need it least. Stacy Mitchell’s new book, The Big-Box Swindle, tells much of the story. You wonder when this big-box phase of metropolitan development will begin its sunset, and a new and more intelligent form will take its place. People have a right to expect more. We deserve more.

One thought on “New Quality of Life Measure: Retail Percentage”