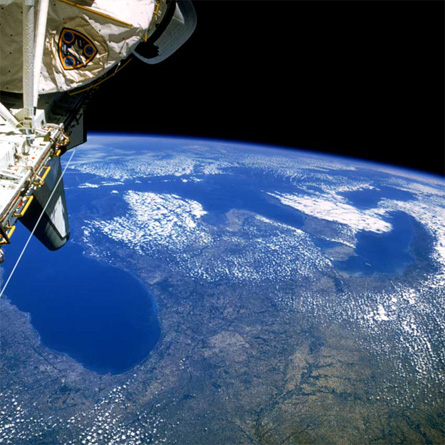 As a lifelong member of the tribe of career adventurists it’s time to announce another turn in the journey. I am leaving the Michigan Land Use Institute to take a new position as senior editor and strategist for Circle of Blue, an independent online journalism, research, and movement building organization focused on helping to solve the freshwater crisis. What’s especially keen, along with the great promise of a new way to influence a global environmental and economic crisis, is that I won’t have to leave home. Circle of Blue, based in Traverse City, is the second organization devoted to public interest journalism, research, and social organizing in northwest Michigan. The first, of course, was the Michigan Land Use Institute, founded in Benzonia on April 22, 1995, the 25th anniversary of Earth Day.

In many ways the same three factors — trends in news and communication technology, a compelling public interest, and opportunity — that drew me to Circle of Blue also prompted the founding and strategic vision of the Michigan Land Use Institute. Both organizations are devoted to executing the highest standards of journalism and perform that mission at a level of reporting, framing, and narrative that well-exceeds the capacity of the mainstream media. Both organizations understand how to apply email, the Internet, multi-media, motion graphics, and the other evolving communications tools to attract and inform large online audiences. And both utilize the power of great storytelling to support citizen movements that influence the course of events on complex economic, environmental, and cultural issues.

In its  basic outlines none of this is really new.  The environmental historians among us will recall that John Muir, the essayist and founder of the Sierra Club, applied his tremendous reporting and storytelling skills in the pages of Century Magazine in the late 19th cenury to argue for conserving the Sierra Nevada. That work, disseminated to Congress, prompted the United States in 1890 to establish Yosemite as the nation’s second national park.

Yet all of it is new. What we learned at the Michigan Land Use Institute is that great reporting, well-told and broadly disseminated, helps to shape, clarify, elevate, and support the grassroots groups that are making all the difference now in our state. The Institute recruited terrific reporters – Kelly Thayer on transportation, Patty Cantrell and Dianne Connors on agriculture and local foods, Andy Guy on the Great Lakes, Carolyn Kelly on energy, Glenn Puit on investigations — and gave them the time to dig in and pursue important stories. Though there are exceptions, the opposite is occurring in the mainstream media. My epiphany on this subject came in 1995 when my own newspaper flooded the OJ Simpson trial coverage with elite writers only to discover that the National Enquirer consistently produced the best reporting.

The Institute’s founding came just six months after CompuServe and AOL offered the first dial-up Internet service. We very quickly recognized that the print publishing strategy we initially developed would move online. In 1998, when the Institute launched its first Web site, the organization’s work was read by the 5,000 families and businesses that received our three-times-a-year Great Lakes Bulletin magazine, the several thousand more who saw our work in mainstream newspapers, and others who caught drift of the Institute’s efforts through events and word of mouth. Last July, in contrast, nearly 200,000 visitors came to the Institute’s main Web site, some 25,000 more visited our Taste the Local Difference fresh food site, nearly 20,000 people read our weekly email alerts, almost 1,000 reporters and editors received our weekly Great Lakes Bulletin News Service feed, and some 4,000 people were attracted to our two blogs: this one and Great Lakes Guy.

What does a public interest organization do with that kind of capacity? Help make things better. You make the case stick for an alternative to environmentally ruinous and needlessly expensive, energy-inefficient, land-wasting new highway bypasses in Petoskey and Traverse City. You help an alliance of a conservation groups establish safeguards for two new natural rivers, the first designated since 1988. You begin rebuilding the market, processing, and transportation infrastructure to make it easier for buyers and producers of fresh home grown food to find each other. You provide citizens the information they need to ban oil and gas drilling along the Great Lakes shoreline. You convince the conservative state Supreme Court to overrule an equally ideological state Appellate Court and reinstate the right of all citizens to walk every mile of Great Lakes beaches. You help Michigan and the nation understand that prosperity is intimately connected to how communities are designed. And you report on the prosperity that Chicago and Salt Lake City, Ann Arbor, Grand Rapids, and Traverse City are achieving by embracing a new energy-efficient, transit-oriented, neighborhood sustaining, environmentally-sensitive development strategy.

Although I will continue my affiliation with the Institute early next year as a part-time special projects writer, my departure as a full-time senior leader produces two emotions: lament that comes with things ending, and the ferment that accompanies things new. The Michigan Land Use Institute is a superb public interest organization with a committed and capable staff. Twelve years is a long time in the life of a person and an organization.  One adventure has ended. Another is starting. You say goodbye. I say hello.

4 thoughts on “You Say Goodbye, I Say Hello”