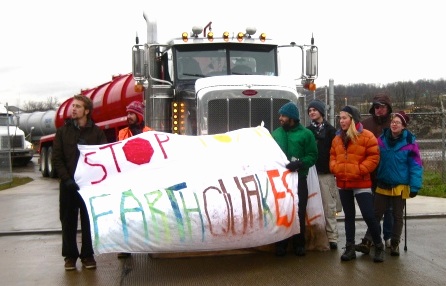 It’s been generations since an industrial development as powerful and as widespread as the new oil and gas energy boom has swept across the United States. The risks — drinking water infiltration, wastewater disposal, oil well explosions, wildlife deaths, and earthquakes — are steadily emerging. The question for federal and state regulatory agencies, already under seige from diminished budgets and lawmakers intent on weakening oversight, is how quickly inspection agencies will respond to public threats.

On Friday, in Ohio, we may have gotten at least part of the answer. Prompted by a series of earthquakes centered around a year-old deep wastewater injection well in Youngstown, including a big quake on December 31, 2011, the Ohio Department of Natural Resources imposed tough new wastewater disposal regulations that will make Ohio’s Class II deep injection wells among the most stringently monitored and regulated in the nation. (Thank you to Ohiofracktion for picture above.)

In a ModesShift post last week I noted that the United States has spent four decades installing the world’s best environmental protection and public safety infrastructure to limit damage from industrial development. The web of statutes and regulations is supported by agencies and personnel whose mission is to ensure that rules are followed, risks are managed, and violators are prosecuted. The oil and natural gas boom that is occurring in at least 12 states, and is getting ready to roll in Ohio, is challenging that regulatory infrastructure to both keep pace and effectively safeguard resources and public health.

Risks From Drilling and Waste Disposal
In the case of Ohio’s Department of Natural Resources, the regulatory infrastructure performed as it was designed to do, with one caveat. It permitted a wastewater injection well in a zone of deep rock with no prior record of earthquakes. It turned out that a fault line existed in the zone and the new wastewater pumping caused it to slip, said the state agency. The ODNR suspended issuing permits for new injection wells, which held up at least 13 more in the state in Mahoning, Washington, Portage, Athens, Noble, Muskingum, Trumbull, and Morgan counties.

The unexpected is always to be anticipated with big industrial transitions, like that occurring with the oil and gas boom. The farm chemical era of the late 20th century produced industrial agriculture practices that fed more people but also poisoned the water and wildlife and people with toxic chlorinated compounds. Nuclear development produced Three Mile Island and Chernobyl. Cars and highways produced suburbs and an expensive lifestyle of ease and convenience that also yielded record rates of obesity and heart disease.

The oil and gas boom is almost entirely the result of production practices that use millions of gallons of water shot under intense pressure into each well drilled into deep shales. The hydrofracking process shatters the rock. But about a third of the water — mixed with chemicals and sand – must be brought back to the surface for the well to begin producing. The wastewater contains all the compounds that were mixed in at the surface plus chemical constituents picked up from the shale.

Deep Injection Wells Linked to Earthquakes in Other States
Wastewater disposal is fast becoming one of the principal issues driving public resistance to oil and gas development, and a primary technical impediment to the industry.

In 1990, the Department of Interior found, in a report to the Environmental Protection Agency, that disposing industrial wastewater in deep wells could cause earthquakes. The report identified five instances of earthquakes centered around disposal wells, including one in 1967 at the Rocky Mountain arsenal. See the report (earthquake-hazard-associated-with-deep-well-injection-report-to-epa-nicholson-wesson-1990)

In recent months, authorities in Arkansas and Texas also have identified earthquakes around frack wastewater disposal wells. South Texas experienced a magnitude 4.8 earthquake in October 2011 near the Eagle Ford Shale play, which is home to many disposal wells. There have been other earthquakes linked to injection wells in the Barnett Shale.

When earthquakes began occurring in Arkansas in 2010 and 2011, the state Oil and Gas Commission banned wastewater disposal wells within a 1,150-square-mile area north of Conway in the Fayetteville Shale region.  According to the Arkansas Geological Survey, the new injection wells were being installed on top of an active fault line.

History of Youngstown Injection Well
The Youngstown injection well opened in December, 2010 to serve a growing market for industrial wastewater disposal caused by the natural gas boom in neighboring Pennsylvania. Though natural gas producers in Pennsylvania say they recycle 70 percent of the frack water they use, that still leaves tens of millions of gallons to dispose safely. Pennsylvania has six deep injection disposal wells. Ohio has 176 operating disposal wells. Companies want to install more of them.

D &L Energy, a Youngstown energy producer, recognized a market opportunity. Their Youngstown disposal well on Ohio Works Drive was one of the state’s newest. Soon after it opened residents began reporting small earthquakes. The ODNR, which issued the permit under regulations and guidelines that had been updated in 2010, investigated and eventually  counted 12 earthquakes in 2011 in the vicinity of the well.

One thought on “Wastewater Disposal From Fracking Can Cause Earthquakes: Ohio Sets Example”