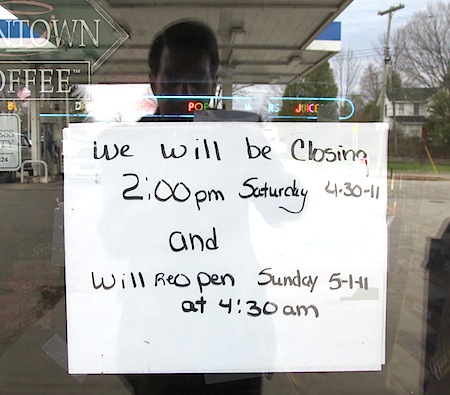 Late on Sunday, the day I planned to write this tribute to Ted Bruce, the nation learned that Navy Seals killed Osama Bin Laden in a daring midnight raid in Pakistan.  It was a rare moment, the first time in my life that death presented itself in such fickle and unexpected garb.

One moment I’m saddened by the illogical death of a 60-year-old friend who I’ve known for 21 years as the generous and hard-working owner of our county’s most popular convenience store. The next moment I’m celebrating the revenge killing of a cold-blooded murderer, a man provided all of the opportunities of an upbringing of wealth and privilege, but who shaped the world for more than a decade by fostering fear and mass death.

Clearly, Ted  Bruce’s life and death meant more here in Benzie County. On Sunday, during a 90-minute memorial service held at the Benzie Central High School gym, Ted  was honored for a life conducted with such fidelity to family, community, honesty, and integrity that about 525 people attended. His oldest son, Todd Bruce, described his father as “an ordinary man who did extraordinary things.”

His acts of kindness, generally random and free of suspicion, included loaning money to people, especially young mothers too stretched to buy Pampers or milk. Friends described his relentless appetite for hard work and Ted’s capacity to bring order to events that could easily spin out of control.  He had great poise and patience, including during the increasingly frequent occurrences when his customers confronted Ted about the rising price of gas.

Because of its location, where US-31 and M-115 converge at Benzie County’s only stoplight, Ted’s Stapleton’s Corner Market is a center of community convergence. And the mornings that Ted was behind the counter he was one of those rare people capable in a 30-second encounter of making you laugh. It was fun to go to Stapleton’s for gas or beer or bread or newspapers because the visit put you in Ted’s energy field. He just radiated such genuine strength of spirit and good human warmth that you just figured he’d always be around. Losing him was like cutting a beautiful stand of white pine, or drying up the Betsie River. Ted Bruce was a clear, fresh spring in the landscape of our community, a man who provided the basic stuff of life so well that when the spring was cut off we all recognized the place he occupied was so empty. And he attained that stature in the most improbable Midwestern way. He did what he did by offering the simplest and most important gifts – love, joy, and candor.

There’s a lot about Ted’s life that perfectly predicted the principles and values that were so admired here in Benzie County. According to the biography provided by his family, Ted was born in November 1950, the third of eleven children raised on a farm in Michigan’s Thumb region north of Detroit. He served in Vietnam and married his wife, Kathie, in 1973. Fifteen years later, with their two sons Todd and Kirk, and daughter Kalee, Ted and Kathie moved to Benzie County where he owned and managed Timberline Shell, a convenience store, and she served administrative jobs in the Benzie County government building in Beulah.

Ted’s long hours at Timberline endeared him to his customers, who numbered in the hundreds a week. That’s where I met him in 1990, when I first visited Benzie County, and later saw him two or three times a week for gas and such on my way to and from Benzonia to Springdale Township, in Manistee County, where I lived.

In 1998, Kalee was murdered while working as a hotel clerk in Traverse City. In 1999, Ted sold Timberline and I saw him around every now and again while he and Kathie did what they could to heal. Then Ted kind of returned in 2004, purchasing Stapleton’s, named for its previous gregarious owner, Tom Stapleton, and life for Benzie residents resumed its normal pattern. Most mornings Ted was at the store doing his earnest, warm, interested Ted thing.

He was, indeed, an ordinary man who did extraordinary things. The day that he died people sent social media messages by email and Facebook and dozens showed up at the store for the first event honoring him. Pictures are available on the memorial Facebook page where hundreds have left comments. Ted joked and chided and laughed. His greatest gift was to make us feel good about the day.