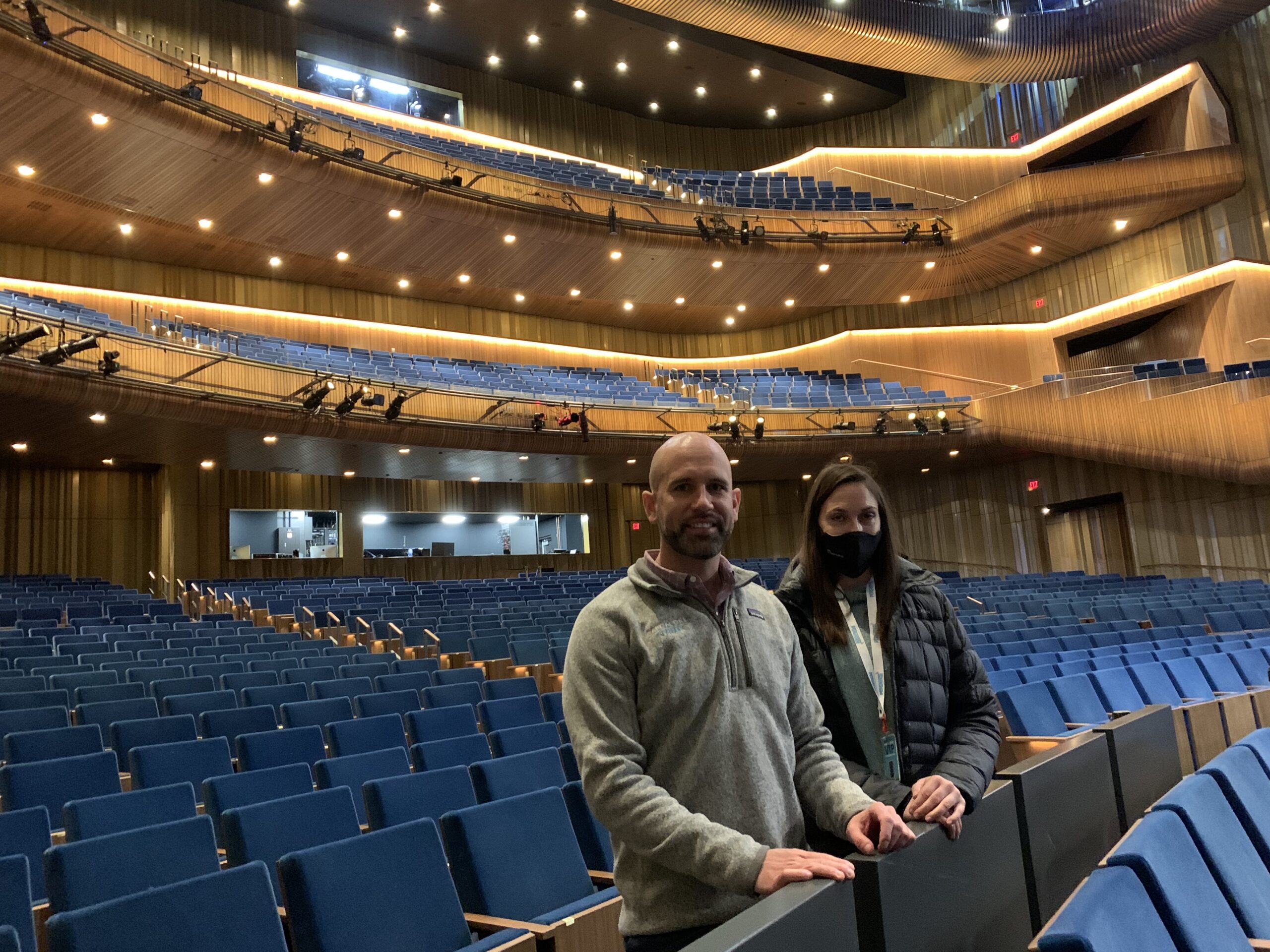 One of the prominent examples is in this suburb close to Washington, D.C. where Capital One just added a 1 million square-foot mixed-use building to its 24-acre campus. The structure includes a 1,600-seat theater, an 80,000 square foot Wegmans grocery, a 300-room hotel, and a 2.5-acre park, all for public use. Across the street a 30-story office building is under construction that includes 50,000 square feet of ground floor retail and restaurant space.

“As a company we think, ‘What we can offer to our associates or to potential associates?” said Jonathan Griffith, Capital One’s managing director. “We wanted vibrant mixed-use amenities that are public facing to bring in that energy that we all kind of thrive off of.”

I thrived on it, too. Reason? This piece from suburban Virginia marked the 40th year of writing for the New York Times. A personal milestone for sure. In February 1982 I published my first Times piece, an account from South Carolina on the closing of the state’s textile mills. I was 25, living and writing in Charleston, and five months into a freelance career with my friend and photographer, Barry Hecht, under my banner news group — S.C. Featured. For that article, and for every other one until I was hired in 1985, the Times awarded me this signature at the article’s start: Special to the New York Times. In 1983 I reported a page one Times story from Chicago on a corrupt product safety testing lab, a story that I broke earlier that year. Same thing. Special to the New York Times. My aunt kidded me about it. Whenever I saw her in New York she’d remark, “Here’s special to.”

The change in Capital One’s corporate campus concept reflects two related trends that executives say appear to be unaffected by the pandemic. The first is the public and private investment here and in other communities across the country that are making suburbs more dense, walkable, bike-friendly, and less dependent on cars. The second is the competition to attract the brightest young employees who want to work and settle in lively places where each is in close proximity.

“It’s urbanization of the suburban experience,” said Alex Krieger, professor of urban design at Harvard University and a principal at NBBJ, an architecture and planning firm in Boston.  “Companies are bringing some of the characteristics of the city to their suburban campuses.”

Others Involved
Examples are appearing across the country. Walmart is building a 350-acre headquarters in Bentonville, Arkansas that includes 2.4 million square feet of office space, a hotel, a food truck plaza, a walking and biking trail and up to 80,000-square feet of street front retail open to visitors.

“The connection and integration of our new home office into the surrounding Northwest Arkansas community is a primary principle of our design strategy,” said Jacquelyn Cook,

JP Morgan Chase opened a 1 million square-foot regional headquarters in 2018 for 6,500 employees close to apartments, stores, restaurants and hotels along a central business boulevard in Legacy West, a 250-acre, $3 billion mixed-use development in Plano, Texas.  In 2020, the bank opened another 540,000 square foot office close to Legacy West’s other headquarters built by nameplate companies, including Liberty Mutual Insurance, Toyota, and FedEx.

“JP Morgan chose a site that’s adjacent to this massive, really cool, mixed-use environment with food and restaurants and an urban vibe,” said Michael Nicolaus, director of commercial and residential mixed-use principal at HKS Architects, which designed JP Morgan’s first office. “It’s all about being a part of something bigger than yourself kind of environment that they think they need to attract and retain the best and the brightest people.”

Microsoft last year spent $149.5 million to buy 90 acres on the western edge of Atlanta for a regional headquarters for 20,000 employees. The company said its plan for the parcel was not fully formed, with one exception. In February 2021 the company revealed that it would invite residents of Grove Park, a neighboring African-American working-class community, to help design 25 percent of the site for “construction of affordable and empowered housing and other local community services and needs.”

“Looking outside as well as within is an important step in our campus and office design,” said Michael Ford, Microsoft’s corporate vice president of Global Workplace Services, in an email message. “We take pride in designing spaces that help us connect with our neighbors.”

Ellen Dunham-Jones, professor and director of the Georgia Tech School of Architecture in Atlanta, explained the company’s strategy this way. “Microsoft is saying what can we do for equity and to mitigate gentrification that is the most progressive thing that no one else is doing.”

The Past
Such concerns are a sharp departure from the expansive, private, single-use suburban headquarters built in the 2oth century that featured large parking lots and typically included cafeterias. Urban history specialists trace the design trend back to 1942 whenAT&T Bell Telephone Laboratories moved from Manhattan to a custom-designed 213-acre campus outside Summit, N.J.

Others took the same path out of the city. In 1958 General Mills opened its suburban headquarters, a statement of glass-enclosed modernism, on 35 acres eight miles outside Minneapolis. IBM moved from Manhattan and in 1964 opened its gated headquarters on land that was once an apple orchard in Armonk, N.Y. Allstate opened its headquarters in 1967 on 122 acres in Northbrook, Ill., outside Chicago.

Capital One’s plan for a new headquarters fit the 20thcentury model when it bought 26 acres in Tysons Corner in 1999 at the intersection of the Capital Beltway and the Dulles Toll Road, two of the busiest highways in suburban Washington. The parcel also lay alongside one of the proposed rights-of-way for the Silver Line, an 11-mile extension of the Washington Metro to Dulles International Airport.

More From Tysons
Capital One initially planned four matching 505,000 square-foot, 14-story office buildings. Each would have connecting nine-level parking decks with space for 1,600 cars. A barbed wire security fence ringed the perimeter and guard houses were stationed at the entrances.

“What was the thinking behind that?” asked Mr. Griffith. “We didn’t want people here on our secured campus. You know, stay away.”

In 2003, the company completed the first of the four office towers and promptly abandoned its design plan. By then, Federal Transit Administration and the state of Virginia had largely decided on the Silver Line route, which included four station stops in Tysons. The McLean Station was proposed for Cap One’s doorstep.

Not long after, Fairfax County initiated a planning process to transform Tysons from a congested, 4-square-mile, auto-dependent commercial center into a mixed-use community with more residences, safer pedestrian connections, public spaces, and parks. In 2010, the county unveiled a master plan to encourage housing for 100,000 residents by 2050, nearly four times more than today, and employment for 200,000 workers, double the number now.

Capital One actively participated in the process because the new master plan allowed companies to significantly increase the scale of their developments in return for public benefits. For example, Capital One could build taller and larger buildings on its campus if it also added a street grid to make walking more inviting. The company also deeded over two acres for tracks and facilities that serve the McLean Metro station, which opened in 2014.

Capital One had scrapped its initial campus design and won county approval for its Capital One Center. It includes the region’s two tallest buildings — a 31-story, 940,000 square foot office tower with 20,000 square feet of retail space completed in 2018, and a second 30-story, 900,000 square-foot office tower with 50,000 square feet of retail that is scheduled to open later this year (2022). The two buildings have space for 11,000 employees. A block away is the 1 million-square foot building enclosing the theater, the events center, hotel, and grocery. Among the design innovations is a 2.5-acre rooftop park with an 18-hole miniature golf course, a beer garden and food truck lot, a dog walk, grass and flowers, and a 250-seat amphitheater that is 11 stories above the street.

Fairfax county also approved four high-rise residential buildings at Capital One Center with as many as 1,200 units, and 100,000 more square feet of restaurants and retail. Mr. Griffith said the bank would add those elements but has not decided on a timetable. When it’s completed Capital One Center will encompass a transit stop and sufficient office, retail, entertainment, residential space to be its own downtown.