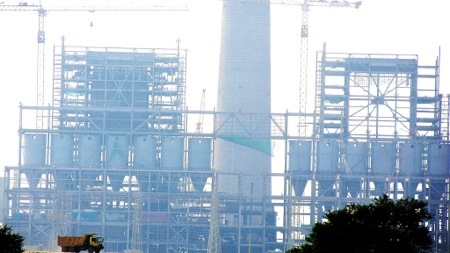 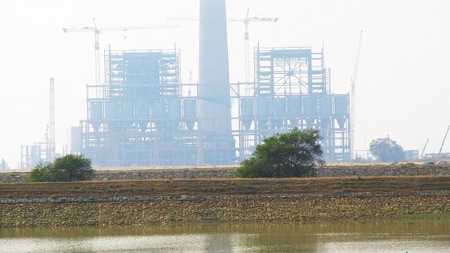 TRAVERSE CITY — It’s been a couple of weeks since our Circle of Blue team completed its 27-day research trip to India. Our work, a scoping mission to prepare for a comprehensive project in 2013, focused on understanding the contest between energy, food, and water in a nation soon to be the world’s most populous. India also is contending with deeper droughts during a period when it has emerged as one of the planet’s top consumers of water-thirsty energy and grain.

The ground reporting, and photography by J. Carl Ganter and Aubrey Parker, took shape in three phases helped considerably by the geography of India’s policy making, farm productivity, and energy development. We spent the first week reporting in Delhi, where we talked with top government and NGO authorities on energy, water, and the farm sector. We spent more than a week touring farms and food processing mills and interviewing farm, energy, and water sector authorities in Punjab and Haryana in northern India, two of the country’s prime grain-producing states. Our last week was spent in Chhattisgarh in east-central India, the second largest coal-producing and largest coal-consuming state. There we visited Asia’s largest open pit coal mine, interviewed coal industry executives, and also spent time with entrepreneurs in the electricity supply and new alternative energy sectors.

Circle of Blue is preparing a four-part series that launches in early February to report in text, original photographs, and infographics what we found. The articles explore farm practices, coal production, resource politics and policy in the era of climate change, and a range of solutions that have potential to become mainstream.

India is the third country Circle of Blue has explored for our Choke Point project, which debuted in 2010 with Choke Point: U.S., expanded in 2011 with Choke Point: China, and went global in 2012 with two trips back to China and a third to India.

All of this reporting from places as distant and different as North Dakota and Ohio, Sichuan and Heilongjiang, Punjab and Chhattisgarh yielded a trove of new facts and a globally significant and fresh narrative about the challenges the world faces in supplying sufficient energy to businesses, and enough food to steadily expanding populations.

In the United States, the conflicts over energy, food, and water are largely confined to specific regions of the country – the Southwest, the Atlanta region, the Great Plains. At this point in the U.S., solving the energy-food-water choke points is principally a matter of refining the basic operating, legal, and investment practices in three vital industrial sectors – energy, agriculture, utilities. The contest over resources reflect the need to adjust policy, operating practices, and investments that are in place and have political credibility. That work is underway, helped considerably by a new emphasis on how droughts and excessive heat are damaging harvests and diminishing electrical generation.

In terms of metaphor, the environmental and economic challenges posed by the tightening choke points over energy, food, and water in the U.S. are well recognized buoys carried along by a strong current of economic transition.

In China, though, the energy-food-water choke points are massive waves battering the shores of that nation’s economic security and environmental safety. China is putting to work the full measure of its technology, treasury, human capital, and resource base to develop at a speed and scale never before witnessed on the planet. The nation’s drive to modernize, and expand its middle class, is helped immeasurably by a centralized governing system that excludes opposition, sets huge goals, and executes to achieve them – shifting grain production from dry provinces to wetter ones, expanding coal production 100 million metric tons annually, developing over 100 big hydroelectric projects in sensitive mountain valleys. But the nation groans in response, pounded by the angry waves of water scarcity, desertification and other deep scars on the land, profoundly dangerous pollution, and a towering waste of resources that weaken China’s treasury and test the patience of its people.

In India, the confrontation over rising demand for energy and food, and diminished water resources, is more subtle, like a powerful political and cultural undertow.

India is pushed forward by the forces of modernization to expand its energy production, electrical transmission, and water supply and transport sectors. Circle of Blue found that India’s capacity to supply energy and food was not limited by scarce resources, even in the era of climate change. The country is amply supplied with water, land, coal, and human intelligence.

India’s farmers produce huge surpluses for a nation that needs half as much grain as China because India does not eat corn- and soybean-consuming beef and pork.

India’s energy producers have the capacity to vastly increase supplies of electricity from coal, wind, hydro power, and solar energy. Its fuel consumption can be supplied from new reserves of domestic oil and gas, and from nascent biofuels production.

But the nation is tugged backwards by inefficiency and corruption in its operating and governing practices. India’s hybrid democracy generates a continuous full boil of political opposition and civic distrust at all times. The result is that national goals are not as bold as they need to be. Policy changes are very difficult to enact. And achieving any significant goal is often a frustrating study in policy that is ignored or not enforced, and bureaucratic inertia that typically takes years to complete. A top executive of India’s largest regional coal company told us, for instance, that changes in mine operations that involve the environment or safety means signatures on applications that move up a chain of command inside and outside the company that has 13 or more levels. Once a final decision is made, the notice of decision requires the signatures of the same 13 desks on the way down. Months pass to complete the process.

In no sectors of the economy are these trends more visible and more clearly defined than in energy, agriculture, and water. India operates its food, energy, and water sectors as a social policy program designed to improve the food security and economic well-being of its people. It can do this because it owns and operates the energy supply and transport infrastructure, and heavily subsidizes energy and farm production.

In short, the consequence of free energy, free water, subsidized farm inputs, and guaranteed grain markets is a powerful and politically unbreakable circle of risk. That circle encompasses over-production of grain, vast waste of water, spreading soil poisoning, crippling electric brownouts and blackouts, rising coal production and consumption, and steadily increasing levels of carbon emissions that are ruining India’s environment, and are harming India’s economy, which is slowing down.

In all, Circle of Blue found that India’s insistence on managing its energy, food, and water sectors as a social policy program needed an urgent update. The generous system of free farm inputs and price supports, which gained credibility and strength in the early 1970s when India was a nation of 550 million people, is now straining under the weight of performing for a wealthier nation of 1.2 billion.

To wit: the country’s coal and electricity suppliers are state-owned and state managed. Water supply and transport systems are state-owned and operated. India’s entire crop of rice and wheat is produced with electricity and water provided to farmers free, or at radically reduced prices. The nation’s 700 million farmers receive fertilizer, seed, and farm chemicals at subsidized low prices. The government buys virtually every grain of rice and wheat from farmers at a generous support price, and pays the cost of milling it for market consumption.

In one respect, the result of India’s control of energy, agriculture, and water is a spectacular success. A nation that knew starvation now produces grain surpluses. Farmers and farm input suppliers form a strong portion of India’s expanding middle class. The major food-producing states – among them Haryana and Punjab – rank at the top in business starts and median per capita incomes.

The Indian way of providing the nation with food also is a powerhouse supplier of votes to supportive politicians who dare not to suggest alterations. Why should they?

In Punjab, for instance, harvests steadily increase because farmers use more groundwater to irrigate. But heavy consumption is causing groundwater to recede deeper into the earth.

We found that’s no problem for growers. High yields and guaranteed grain prices mean farmers can afford to drill deeper into the ground and buy more powerful pumps that suck up free electricity, and that they keep switched on all the time. The pumps, heard at night as a steady mechanical drone across the dark landscape, produce a stout stream of pure water that pours into irrigation canals day and night whether crops are thirsty or not. Half of the electricity in Punjab is used to operate water well pumps.

Circle of Blue found that state authorities are trying to fix that problem not by turning off pumps and conserving water, but by building new state-owned electrical generating stations fueled by state-produced coal from state-owned and operated coal mines.

India is adding 35,000 to 40,000 megawatts of generating capacity each year now, the equivalent of 35 to 40 new 1,000-megawatt coal-fired power plants. That’s a power plant construction program rivaled only by China. But the new electrical plants and the coal mines can’t keep up with demand for electricity.

There are reasons for that, too. India’s slow bureaucracy makes it difficult for state coal mine managers to secure expansion permits from their colleagues in India’s federal and state environmental agencies. India’s electrical transmission network is obsolete and wastes a sizable share of power it is meant to transport. India’s rail network was built for an earlier era that didn’t transport as much coal. Many of India’s newly built coal-fired plants aren’t yet operating, or operating well below their peak capacity, because they don’t have fuel.

In Chhattisgarh we met a young lawyer trained as a physical therapist who’s decided to become a landowner and farmer. His answer to shortages of climate-changing coal: growing elephant grass to serve as a lower carbon, less polluting biomass fuel for electrical generation. On the way out to see the experimental plot where he is testing field practices and crop varieties we passed a giant coal-fired plant under construction, and nearby a big water transport canal receiving repairs and undergoing expansion. The two projects, clearly following similar completion schedules, were linked. More water is needed to generate steam and cool the big plant’s equipment.

A horde of construction workers swarmed the base of the canal, many of them women clad in bright red, yellow, and blue saris. They balanced on their heads big wooden trays loaded with red clay soil. They carried the loads from one side of the canal to the other. In the contest between coal, water, and elephant grass it was plain which fuel is paramount. 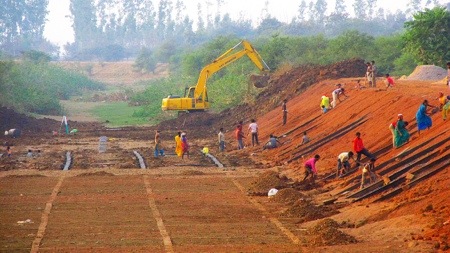 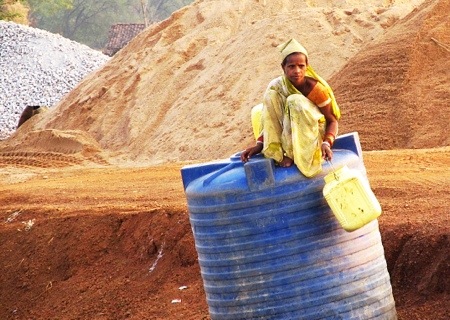