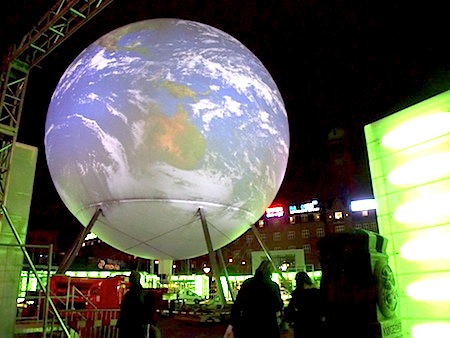 The Department of Energy earlier this  month reported that crude oil production in the United States climbed to 5.88 million barrels per day, the most since 1998. Meanwhile the share of oil demand taken up by imports is declining. After nearly three decades of steadily falling domestic production, the U.S. is now in the midst of an oil boom that is in its third straight year, with no sign of abating.

Last night on the way home from Grand Rapids I paid $3.16 a gallon for regular gas. I can’t recall the last time gas was so close to the $3.00 mark in Michigan. A number of factors account for the moderating price of gas, not the least of which is lower demand and increasing supply in the United States.

Big Texas and North Dakota Oil Plays
The latter is closely related to the deep shale oil drilling booms now underway in North Dakota, soon to be the second largest oil production state, which is on track to supply 150 million barrels of oil this year, nearly 40 percent more than in 2010. The other big new oil play is the Eagle Ford Shale in east Texas, where deep shale oil development has helped push that state’s daily production to 1.4 million barrels per day, up from 1.1 million barrels per day last year.

Still, this new oil boom, and its related boom in natural gas production, is providing a period of reprieve for the principles of choice and mobility that motivate what’s left of our national spirit. Domestic oil production could well climb to near the 1970s levels, reducing imports, limiting our interference in oil-exporting regions of the world that hate us, holding prices in check, and adding to domestic stability. It is providing hundreds of thousands of new jobs, and making a handful of companies and their executives and owners even richer than they are.

The big question for the United States is twofold. One, can we summon the will to limit the environmental damage the drilling is causing across the country? Two, can we break through the rhetorical impediments — no new taxes, regulations are killing jobs, government doesn’t work, etc  — to require developers to pay state and federal fees on every new barrel of oil and thousand cubic feet of natural gas produced?

A 15 percent state and federal fee just on the new oil production alone would generate $10 billion annually, enough to resolve the deficits in new energy producing states like New York, Ohio, and Pennsylvania. A similar tax on new natural gas development would generate $20 billion annually, by my calculation. That would be enough to make substantial investments in science, research, education, infrastructure, transit, and clean energy to put the U.S. in contention globally to at least compete in the new markets of the 21st century. Moreover, as oil and gas production increased, as it now seems likely to do over the next generation, so would revenues to invest in public projects.

My sense is the environmental community has an opportunity to lead on this one. Along with demanding accountability and transparency to limit damage to land and water, environmentalists also have the chance to move beyond their own institutional inertia. They should call for a public return on natural resources to reposition the country to leverage the wealth from new energy development to speed the new era of efficiency, low carbon energy generation, innovation and job growth. Use the power of organizing to move the country to a new thought. Otherwise the same old thinking will prevail with a few getting filthier rich as they damage the land, water, and what remains of our national purpose.

Along A River of Descent, New Riches in Ohio