The annual tally of American “Boom Towns” in the May issue of Inc. Magazine includes not one — repeat, not a single large, midsize, or small city in the Great Lakes region that qualifies among the nation’s top generators of new jobs. If the entire Midwest is considered, the only two cities that sneak onto the list are Springfield, Missouri (ranked # 20 among midsize cities) and Dubuque, Iowa (#15 among small cities).

The list does include some of our favorite Mode Shift metropolitan regions in the midst of implementing a new economic development strategy based on environmental sensitivity, energy efficiency, land conservation, rapid transit construction, and more compact patterns of housing and business development. Salt Lake City is ranked 10th among large metropolitan areas, followed by Washington, D.C. (#13), Sacramento (#15, see pix) , Houston (#17), Seattle (#18), and Portland (#20).

That still leaves the upper Midwest out of the picture, and for good reason. Consider Michigan, my adopted state. The auto industry here has been shrinking for 35 years. Cities are the most economically and racially segregated in the nation. The state’s joblessness is the highest in the nation, and its fiscal deficit ($700 million to $900 million, depending on who’s counting) is the largest. 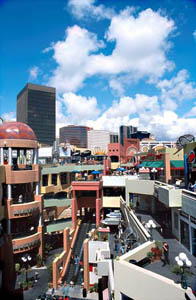 Though blessed with an astonishingly beautiful landscape and abundant natural resources, especially fresh water, the state still views the 19th century strategy of exploitation as more capable of generating jobs than a modern stewardship approach that weighs industrial innovation with robust conservation. Michigan should be the global leader in all things water, just as California is the global leader in computer technology, and New York is the global finance and media capitol.  The state government ain’t listening much. Michigan ranks 47th out of the 48 contiguous states, according to a new analysis by the Land Policy Institute at Michigan State University, in per capita public spending on natural resource protection and conservation. Only Georgia spends less per capita.

Now you might think that such dismally telling statistics might get a few people in our state capitol upset. Hardly. For months now Democratic Governor, Jennifer M. Granholm, and Legislative leaders of both parties, have been wrangling not about how to leverage public dollars to innovate, but over the old canard of raising taxes or cutting spending to close the deficit, which is now threatening to prompt big reductions in public school budgets and health care.

The governor argues that a tax increase is needed. Republicans, who last year enacted a $1.9 billion tax cut for businesses (20 percent of the state’s general fund revenue) without developing a replacement, say more program cuts are needed, not more revenue.

The GOP’s view here is consistent with the party’s thesis that tax cuts stimulate economic actvity. That theory, though, has been proven completely false in Michigan.  During the 1990s, Republican Governor John Engler, helped by a Republican-led Legislature, enacted a continuous series of measures that reduced the percentage of income that state residents pay in state taxes from 8 percent to roughly 6.7 percent, according to an analysis by the Citizens Research Council, a respected non-partisan public policy research group in Livonia. Michigan is in the middle of the national pack in the percent of income wage earners and companies pay for taxes.

The cuts, though, drained billions of dollars from state revenue and hurt the public institutions and programs that other states are fortifying to improve their competitiveness. In Michigan, tax cuts translated into a $275 million reduction in state aid to universities over the last four years, $172 million cut from human services over the last five years, $323 million cut from public schools, and $447 million in cuts in revenue sharing to operate cities and towns. State employees gave back $186 million in concessions to save money, and 7,400 jobs were cut from the state payroll.

In other words if tax cuts truly made a difference, then Michigan would not be the national leader in joblessness, would not lead the nation in the number of educated young people who leave the state to seek opportunity elsewhere, and not be at the very back of the national pack in creating new businesses and jobs. The data show that tax cuts grievously injured the state’s well-being and competitiveness.

Trouble is the Democrats have no counter proposal except tax increases. Neither Democrats nor Republicans are talking about the fact that Michigan state government will spend $40 billion this year to support a menu of programs, $10 billion on economic development alone, and is using that money to vigorously pursue an economic strategy that is firmly mired in the 20th century. Highway building instead of rapid transit. Taxpayer subsidies to lure new companies that aren’t coming. Agriculture programs designed to supply global markets with cheap grain and milk, and are producing dairy and hog factory farms that are among the state’s largest water polluters. Investment programs for infrastructure that penalize cities and spur new development in the countryside. If you want to see what happens in a place where new ideas are not seen as a virtue, and partisan division and turf protection trumps collaboration, come to Michigan.

A last thought: Seeking a Mode Shift economy that delivers good jobs, business opportunities, and a high quality of life is not a partisan issue. Utah, the most Republican state in the country, also put the Provo and Ogden metropolitan regions on the list of Inc. Magazine boom towns. The state achieved its robust economy by investing state funds in new industries like computers and outdoor recreation, and by building one of the most robust rapid transit systems in the nation. Tax cutting was not high on the operating agenda. Utah’s population (2.5 million) is 75 percent lower than Michigan’s 10 million residents. The state budget is $10.8 billion this year. Utah also has a $1.8 billion budget surplus.

3 thoughts on “Inc. Magazine Hot Cities: Not One in Upper Midwest”