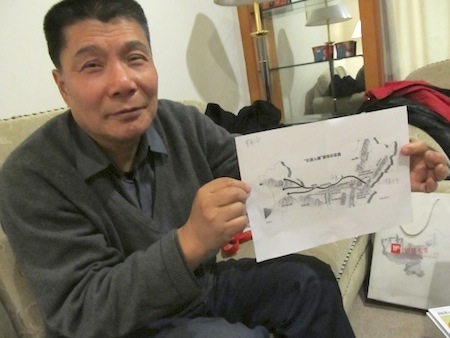 Over the next half-hour or so, Huo described a first-of-its-kind transcontinental pipeline that he believed could be a breakthrough in developing more fossil energy from Xinjiang and China’s other northern coal-rich provinces, while conserving the region’s scarce freshwater reserves.

His proposal: drop a pipe into the Bohai Sea in China’s east, draw more than 340,000 cubic meters (90 million gallons) of seawater a day into a complex of coastal desalination plants, and then pump this water 1,400 meters uphill for more than 600 kilometers (nearly 400 miles) to Xilinhot, where it will be used for coal mining operations.

The Bohai Pipeline reflects the urgency of China’s confrontation with its diminishing freshwater resources.  It also represents the country’s daring and tenacity in solving big problems, a quality that is weak in the U.S. I know. Human rights, environmental degradation, over population, lousy toilets, slow Internet. These also describe China. But there’s no mistaking  China’s resolve to succeed, and the fact that it’s produced rising incomes and opportunity for 400 million citizens. In the U.S., the middle class is under seige and incomes for almost everybody but the wealthiest have been falling for over a decade.

Xilinhot, an Inner Mongolia city of 177,000, is the destination for the Bohai Pipeline. It lies atop a mammoth and, so far, untouchable coal reserve. Chinese authorities estimate Xilinhot’s proven and unproven coal reserves to contain 1.4 trillion metric tons. At China’s current rate of coal consumption—more than 3 billion metric tons annually—the Xilinhot reserves alone could power the country for the next 425 years.

If the first $US 6 billion stretch of the Bohai Pipeline were to perform as Huo anticipates, it could be expanded and sent an additional 2,800 kilometers (1,850 miles) from Xilinhot—crossing the rest of Inner Mongolia and through northern Gansu Province—all the way to the western province of Xinjiang, where Chinese geologists say even larger coal reserves exist. Leaders are pressing the region to double current coal production capacity to 200 million metric tons of coal per year by 2015.

By the time had Huo finished his presentation, he had ignited a national engineering debate surrounding the cost, practicality, and feasibility of using vast amounts of purified seawater to produce more coal for China’s modernization, while simultaneously easing northern China’s water shortage. By suggesting a giant project that some authorities considered daffy, Huo also confirmed just how vulnerable China’s powerful engine of growth is to deepening water scarcity, particularly in the energy-rich northern and western provinces, now the primary focus of China’s development and modernization.

Collision Approaches
As China rushes deeper into the second decade of the 21st century, the nation’s energy production and consumption trend is a steep, increasing line. It is that vector— fast-rising energy demand confronting water scarcity—that is proving so difficult to resolve.

Huo Youguang, a professor in the Center for Environment and Modern Agriculture Engineering at Xi’an Jiaotong University in Shanxi Province, is convinced a transcontinental pipeline will help.

Back in December, while I was reporting in China for Circle of Blue, Huo told me that the transformation of the growing and modern desert cities of Inner Mongolia, Gansu, Xinjiang, Ningxia, and Shanxi provinces are endangered by their diminishing freshwater reserves.

These regions contain the nation’s largest proven and unproven coal reserves. But developing coal reserves, along with the power and processing infrastructure to consume coal, uses tens of billions of gallons of water each year—water that isn’t available in a region that receives just a few inches of rain annually and where climate change is reducing snow pack.

We need water, and the sea can provide it,” Huo said, noting that he had first proposed an across-the-north route for a pipeline from the Bohai Sea back in 1997.

In 2002, a separate academic team from Beijing University proposed a similar route, but further to the north. However, both pipelines—which would transport water more than 3,400 kilometers (2,100 miles) to Xinjiang—are seen by a number of Chinese engineers as impractical.

And even if the pipeline were built, say critics, would it really be capable of slaking the big thirst of northern China’s coal sector?

Evading Water-Energy Choke Point, For Now
Of all the threats over the next decade to China’s rapid modernization, arguably none is more significant than assuring adequate supplies of coal, which accounts for 70 percent of the nation’s total energy production and consumption. In the previous chapters of Choke Point: China, Circle of Blue has reported the essential outlines of a potentially ruinous and fast-approaching confrontation between rising demand for coal and steadily diminishing freshwater reserves.